Government claims to be uncertain about the meaning of '150 days' in the constitution it commissioned in 2016.

Confusion has erupted over what the 150-day deadline on the election is following the enactment of the election law, with the uncertainty likely needing a Constitutional Court interpretation, according to political observers.

Chartchai Na Chiangmai, a member of the Constitution Drafting Committee (CDC), said the 150-day deadline means the election must be held within 150 days of the last of the organic laws coming into effect.

Two sections in the charter involve the election process.

Section 268 requires the Election Commission (EC) to organise a poll within 150 days of four key organic laws related to elections being promulgated and Section 85 requires the election outcome to be announced within 60 days of the election date. 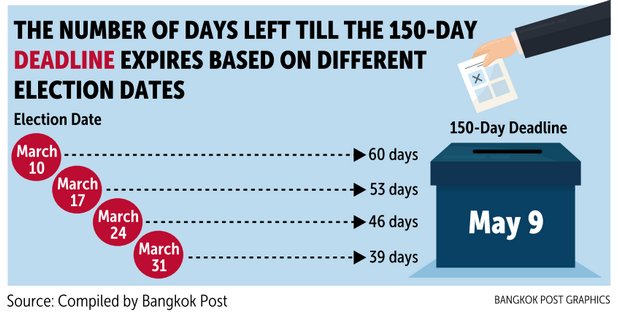 With the law governing the elections of MPs taking effect on Dec 11 last year, the last possible election date within the 150-day deadline is May 9, according to Mr Chartchai. After May 9, the poll results must be endorsed by the EC within 60 days.

His remark is aimed at diffusing public criticism after Deputy Prime Minister Wissanu Krea-ngam said last week that the election was likely to be delayed from Feb 24 to avoid having poll-related activities overlap with those of the coronation ceremonies which will take place during May 4-6.

Critics warned that if the election is to be postponed, the results might be announced later than the 150-day deadline, which could lead to the poll being nullified.

Some critics said the law must be interpreted to explain if the election must be held or that the entire process, including the endorsement of the result, must be finished within the deadline.

Mr Wissanu said the EC may seek the Constitutional Court's opinion if it has any doubts. But if it wants to avoid legal issues the EC will have to get the entire process completed by May 9.

Jade Donavanik, a law lecturer and adviser to the CDC, said Monday the government should stick to the Feb 24 date if possible or postpone it to no later than March 10.

"I think postponing the poll by a week or two is acceptable and there must be a solid explanation. The election may affect the ceremony because the opening of parliament is presided over by His Majesty," he said.