Prime Minister Prayut Chan-o-cha suggests again that Thaksin should return to Thailand to fight for his innocence in court. (Post Today photos)

Speaking after a cabinet meeting Tuesday, Gen Prayut said, "The government cannot negotiate with a fugitive".

"If Thaksin thinks he is not in the wrong, he should return and fight the cases."

Even though Thaksin no longer has to serve the two-year jail sentence handed down 10 years ago for the Ratchadaphisek land case because the statute of limitations expired on Oct 21 last year, there are four other pending cases against him in the Supreme Court's Criminal Division for Holders of Political Positions.

The prime minister's invitation essentially repeated a call last September by first Deputy Prime Minister Prawit Wongsuwon for the exiled convict to return to fight to clear his name in court.

The ex-premier, removed by a coup in September, 2006, said the country could not move forward because it was being derailed by military coups, including the power play in 2014 which ousted the government led by his sister Yingluck.

Thaksin, who clearly enjoys the "Twitter wars" with the regime, basically repeated his reply in Tuesday's exchange with Gen Prawit.

He said that he does not trust the justice system as it currently functions under the regime. 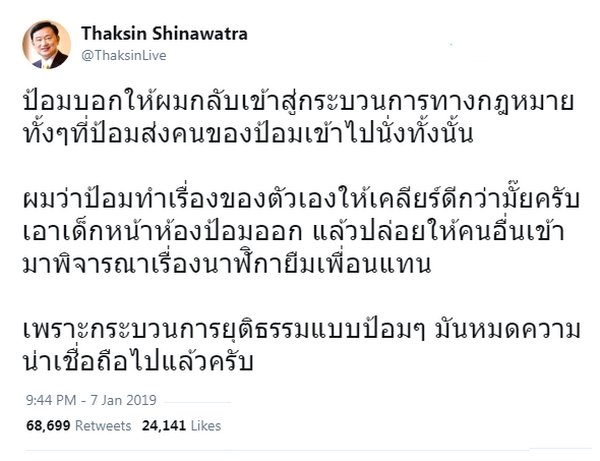 Shelved when he fled the country in August 2008, the cases were revived following the enforcement of a new law on criminal procedures for political office-holders that took effect on Sept 29, 2017.

They pertain to Exim Bank's 4-billion-baht loan to Myanmar; the two- and three-digit lottery scheme; the alleged manipulation of telecom concession fees; and the Krungthai Bank loan scandal.

Mr Yongyuth called on the regime to negotiate with Thaksin for the sake of national reconciliation, and announced that he will find ways to bring Thaksin home.

Mr Yongyuth is the co-founder of the Pheu Chart Party, which is known to be closely aligned with the red-shirt United Front for Democracy against Dictatorship.

He served as a natural resources and environment minister during Thaksin's stint as prime minister.

Meanwhile, the National Anti-Corruption Commission (NACC) has denied reports that a probe against key Pheu Thai Party figure Chadchart Sittipunt was being rushed as speculation was rife that the former deputy transport minister will be nominated as a prime ministerial candidate in the upcoming election.

Watcharapol Prasarnrajkit, the NACC chairman, insisted that there was no political motive to block any bid by Mr Chadchart to become prime minister.

"As the election approaches, the NACC does not want to become anyone's political tool," he said.

More than 30 former cabinet ministers who served in the ousted Yingluck Shinawatra administration, including Mr Chadchart, have been accused of failing to perform their required duties properly.