Her latest Facebook photo shows off her splendid New Year's rose bouquet, but the revelation of her Cambodian passport has caused equally red faces amongst the Thai government and her political allies alike. (Main photo FB/Y.Shinawatra)

Former prime minister Yingluck Shinawatra is the holder of a Cambodian passport, the <i>South China Morning Post</i> has learned, adding weight to the theory she fled Thailand in 2017 via Cambodia, despite strenuous denials by Phnom Penh.

A scramble began in Bangkok to try to square various statements of the past with the new facts, especially official and iron-clad confirmation of her ownership of a Cambodian passport.

The Ministry of Foreign Affairs refused to comment on the report.

"We don't have any information on this," Busadee Santipitaks, director-general of the Department of Information at the Ministry of Foreign Affairs, told the Bangkok Post.

A source within the Pheu Thai Party told the Bangkok Post that Wednesday's report was groundless and that Yingluck did not use a Cambodian passport when she fled.

The source said Yingluck - despite holding many passports of other nations - used a Thai passport to enter Dubai and the United Kingdom, until the Ministry of Foreign Affairs cancelled that passport in October 2017.

"She used her Thai passport [until it was cancelled] because she did not want to cause any problems for countries that issued her passports," said the source.

Corporate filings in Hong Kong revealed Yingluck, 51, had used a Cambodian passport to register as the sole director of PT Corporation Co, a firm incorporated in the city on Aug 24 last year, almost a year to the day after she went into self-imposed exile ahead of a sentence for criminal negligence.

The filings also contradict the claims by the Cambodian government that it had not issued any travel papers to her when she left her country under mysterious circumstances, while supposedly under the 24-hour surveillance by the military government. Yingluck has since been sentenced to five years’ imprisonment for mishandling rice subsidies, charges she rejected as political persecution.

The Hong Kong company’s incorporation is among a set of the first publicly available documents revealing her business dealings after avoiding the limelight since fleeing Thailand.

It is not clear what business the company is in. But just four months after she set up the company, Yingluck was appointed chairwoman of Shantou International Container Terminals, a Guangdong-based port operator, other documents show.

“If it is an official [Cambodian] passport, the question would be, how does someone like Yingluck get the passport?” said Chong Ja Ian, a professor of foreign policy at the National University of Singapore.

But Mr Chong said it made sense for her to have acquired it because Cambodia was an “easy option … just across the border”.

“If you want to travel relatively inconspicuously, having a passport such as a Cambodian one would be easy in that sense,” Mr Chong said. “Clearly as neighbours, this could become an issue of contention.” (continues below) 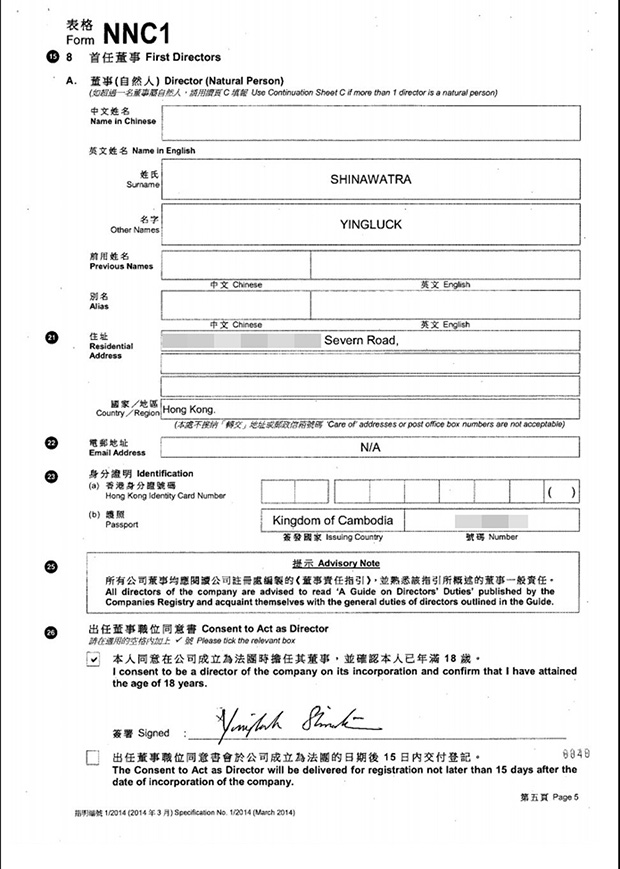 Around the time Yingluck fled, the Phnom Penh Post quoted an official from Cambodia’s Passport Department as saying: “Ms Yingluck [is] Thai, she is not Cambodian, so I don’t issue a passport to foreigners.”

The Cambodian Ministry of Interior’s Immigration Department also said then it had no reports that Yingluck, who is the prime minister from 2011 to 2014, had departed for Singapore through Cambodia.

The foreign ministries of Thailand and Cambodia did not respond to requests for comment on Wednesday.

Cambodia is a close ally of China, with deep economic and military links. Yingluck and her brother Thaksin -- also a former prime minister -- were in China over the weekend to visit their ancestral home in Fengshun township in Guangdong. 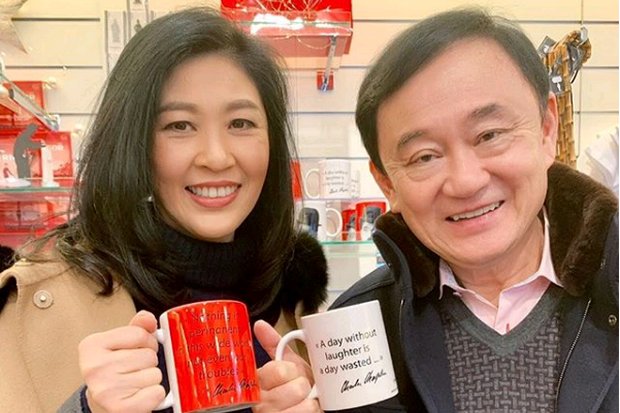 Yingluck is a regular social media poster but sticks to mostly bland and family photos, like this one with big brother Thaksin posted last month - and she never has posted a word or image of her recent business dealings that were revealed on Wednesday. (Instagram/pouyingluck_shin)

Yingluck’s registration of the Hong Kong company also revealed the extent of the family network. While she is the sole director, another company with the exact same name, though with a Bangkok address, was listed as the Hong Kong firm’s founding member.

Pintongta Shinawatra Kunakornwong, and Paetongtarn, daughters of Thaksin, are the major shareholders of a Thai company called PT Corporation Co, according to disclosures from a separate, Bangkok-listed company.

When the South China Morning Post visited the company’s registered address at the K11 Atelier in Tsim Sha Tsui, an upscale 66-storey office building, the office was occupied by a company called Pacific International Capital. One of its directors is Chen Huaidan, formerly known as Celine Tang.

Staff at the company said they did not know anything about PT Corporation, or its connection with Yingluck. “I don’t know why you are coming to us about this company,” a member of staff said. Another company employee later declined over the phone to comment on the relationship.

Ms Chen is also managing director of a Singapore-listed property company, SingHaiyi Group, which did not respond to inquiries on Wednesday.

According to SingHaiyi Group’s website, Ms Chen worked as a judicial officer in a district court in Shantou before 1995. She has a bachelor’s degree from the People’s Public Security University of China.

She and her husband, Gordon Tang Yigang, were believed to be close to Yingluck, so much so that Yingluck registered her residential address as a luxurious house on The Peak that was bought by the couple for HK$250 million in 2012, according to corporate filings and records from the Land Registry.

The couple have been previously reported to have close ties with American politicians, and donated US$1.3 million via a US-registered company to support Jeb Bush, son of former president George HW Bush, for his presidential campaign in 2016, according to election financial data provided by a US government agency.

PT Corporation Co’s secretary is HYL Secretarial Services, incorporated in the same month as the former.

HYL’s director, Alexander Leung Ho-yin, a lawyer, declined in a Wednesday phone interview to talk about PT Corporation Co’s business dealings. He said he had been informed that PT Corporation Co would be switching to yet another secretarial company. It would be the second time it had done so, according to records.

On Wednesday, Hutchison Port said it had sold all its shares at an undisclosed price to a Singaporean investor whom it did not name. A spokesman did not say when the deal was made, beyond commenting that it was beyond the company’s control who the investor brought in after the shares were sold.

The other 30% of shares are held by the Shantou arm of China Merchants Port Group. Corporate filings showed Ms Chen was appointed director of Hutchison Ports Shantou on Nov 11, 2018, with staff from Singapore, mainland China, and three Hong Kong ID card holders.

Thaksin, 69, who is also in self-imposed exile after being overthrown in a military coup in 2006, registered with a Montenegro passport. His residential address is listed as being in Emirates Hill, an upscale district of Dubai, where he has been living for the past decade.

Attempts to reach Yingluck were unsuccessful.