Portraits of Thaksin and Yingluck hang inside the ancestral hall in Taxia. (Photo: Kinling Lo)

TAXIA, China: Inside an ordinary ancestral shrine in a village in southern China, where locals pay respects to their forebears, hang photographs of two unusual figures: Thaksin and Yingluck Shinawatra.

“Everyone here knows about their ties to this place, for sure,” said Xie Yimin, a home supplies shop owner in Taxia village in Guangdong province, four hours’ drive from Guangzhou.

Thaksin and Yingluck, both former prime ministers of Thailand, are fourth-generation Chinese immigrants descended from a family of Hakkas. Their great-grandfather Seng Saekhu, like many others from the Guangdong cities of Meizhou and Chaozhou, had left China in the late 19th century for what was then Siam, where he grew wealthy from trading and taxation businesses.

Before each went into self-imposed exile after being ousted by military takeovers in 2006 and 2014 respectively, Thaksin and Yingluck had become familiar to Taxia. With the help of the Chinese government during his term as leader, Thaksin was able to trace their ancestral roots to the village. He first visited it in 2005, before returning with his sister in 2014.

The siblings’ portraits were placed in the centre of an array of photos of prominent descendants of the village with the clan surname Qiu.

“Being distant relatives [with the Shinawatras] was something people liked to talk about,” Xie said.

But not any more.

Thaksin was ousted in a military coup in 2006, fleeing abroad to avoid a corruption charge. He was convicted in absentia in 2008 and sentenced to two years in jail.

Yingluck was sentenced to five years in prison in absentia in 2017 for mishandling rice subsidies that resulted in huge losses to state coffers. She fled the country ahead of the verdict.

The siblings have made plenty of high-profile trips in the past year, including appearances in China, Singapore and Japan. But it was quiet in Taxia when they arrived for their latest ancestral visit on Jan 5. According to the Chinese media, the pair stopped at the shrine to pay their respects.

“This was nothing like their previous visit,” said Xie, whose shop is a minute’s walk from the shrine. “Ever since Yingluck’s scandal, we were asked to give the relations between them and our village a lower profile.”

“[Villagers] only found out they were coming half an hour beforehand because police started blocking the roads. We were informed a week in advance last time,” Xie said, adding that villagers were asked to stay away, with only government officials and some distant relatives being allowed near the visitors. She said they stayed for half an hour.

As much as China loves to play up the ancestral roots of prominent and successful overseas Chinese figures, the red carpet that was once rolled out for the Shinawatra siblings has been rolled away.

During their previous return to Taxia, photos in the ancestral hall show, the local government organised a feast for them and locals to enjoy against a giant display that read “Welcome back Thaksin and Yingluck”.

This time, Yingluck posted a short video on Instagram of her and her brother visiting Taxia, showing them getting out of a car and being greeted by eager and smiling Chinese locals. However, all relevant Chinese state media photos and articles about their visit were deleted within a day.

Their brief stop also missed out one of the ports of call on Thaksin’s previous two visits: the ancestral home of their mother, an hour’s drive from Taxia.

The house sits on a small hill in Meijiao village, where pomelo trees are a common sight. A 2012 plaque on an outside wall of the 200-year-old yellow concrete building identifies it as a protected heritage site, commemorating the place where the mother of Thaksin and Yingluck lived. She resided there for two years in her brief return to China during World War II, according to Chinese state media.

Five years ago, the siblings had a photo taken in front of the house with their oldest living relative, who state media reported was the wife of their mother’s cousin. Aged about 90, she still lives alone in the run-down abode, her neighbours said.

With its shattered windows, broken doors and stove, and a floor covered in leaves and chicken droppings, it is a world away from the affluent lives of Thaksin and Yingluck.

“When they visited last time, the local government did try to fix the house a bit, mend the walls and clean it,” said Li Dongling, who runs a pomelo business in the village. “But they never came again.

“Sometimes I see the old lady and I feel sorry that she lives in such ruins — it looks like the house could collapse at any time,” said Li, who has lived in the village for over 20 years.

“But this [the association with the Shinawatras] doesn’t bring any benefit to us as a village. We rely on ourselves for our living.”

Qiu Mingqian, a Taxia village committee member of the Communist Party, said plans to preserve the Shinawatras’ family history had been put on hold indefinitely.

“The government wanted to preserve some heritage related to them and revitalise the ancestor temple,” Qiu said. “Somehow the plan never went ahead, for political reasons.”

While China’s reception for the Shinawatras has cooled, the reverse has been true for the family heritage of another Southeast Asian leader, whose ancestral home is 80 kilometres away.

In the village itself, newly paved roads, an artificial lake, security cameras and an automatic lighting system can be found alongside hundred-year-old traditional Chinese terraced houses with grey tilted roofs.

A new two-storey Lee Kuan Yew memorial hall and a tourist centre stand in the middle of the village, while a house described as Lee’s ancestral home is marked by two plaques about the architecture.

These form part of a 30 million yuan (US$4.5 million) project launched by the local government in 2014 to turn the tiny village of about 300 residents into a rural tourist site honouring the man who governed Singapore for three decades and oversaw its 1965 separation from Malaysia.

Lee, who died in 2015, had said that his great-grandfather Li Muwen came from Tangqi village and moved to Singapore to do business. Li later left his family — Lee’s ancestors — in Singapore to return to China in 1884, building the house and starting another family there.

Despite the efforts to tie Lee’s name to Tangqi, Lee and his descendants — including current Singapore Prime Minister Lee Hsien Loong — have never set foot in the place.

“This [entire project] was a Chinese initiative; the Singapore government never acknowledged it,” said He Yaohong, a member of museum staff who is also a village cadre. “The Lee family is already head of state of another country and would never want to be called Chinese.”

She said visitors to Tangqi, numbering a few hundred to a thousand per month, were mostly Chinese or Singaporean Chinese.

There was a rumour that Lee Kuan Yew’s younger brother had visited in 2005, but no visits were expected from the more powerful members of the family, she said.

“The government did inform Singapore about building this tourist spot, because we are using Lee’s name and image,” He said. “We are just using his name for our own purpose, and as long as both sides are all right with this, everything is fine.” 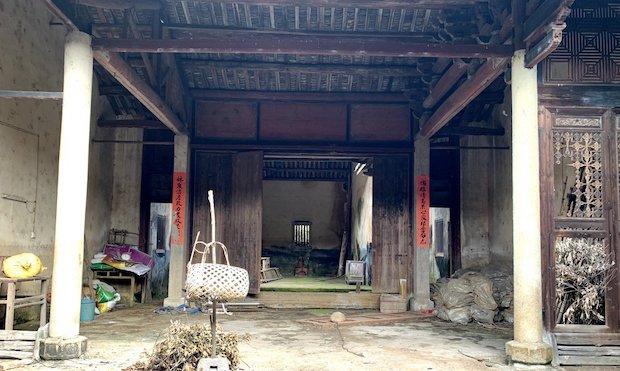