Lese majeste fugitive Surachai Sae Dan (centre) is feared to have been murdered along with two other men whose bodies were washed up from the Mekong River on Dec 29. (Graphic courtesy Prachatai.com)

Police confirm that DNA tests prove that two bodies washed up on the shore of the Mekong River in the Northeast are the corpses missing anti-government activists.

The murdered men are believed to be the victims of more political killings of accused lese majeste suspects tracked down and killed inside Laos.

A third disappeared person, long-time anti-government activist and self-proclaimed pro-Maoist communist Surachai Sae Dan, is believed to have been abducted on Dec 6 with his aides, Sahai Kasalong, 47, and Sahai Phuchana, 54.

The two men whose bodies have been found are known by their pseudonyms, Puchana and Kasalong. They and Surachai disappeared from homes in Laos, where they took shelter after fleeing the military regime's arrest warrants.

A group of Thai exiles in Laos are associated with the anti-coup movement, and the red shirts' political front, the United Front for Democracy against Dictatorship. Most took direct part in the aggressive street protests in Bangkok in 2010 that were violently crushed by the military.

Several have been identified as members of a red shirt-linked faction advocating that Thailand become a republic, and have been wanted on charges of lese majeste since the military took over government in May, 2014.

Lese majeste carries penalties of up to 15 years in prison per offence, but is not subject to the death penalty.

The disappearance of the three men in December raised concern among fellow activists that they were kidnapped by a death squad, either vigilantes or officially sanctioned.

The bodies were found on Dec 27 and Dec 28, wrapped in brown sacks along with blocks of cement, presumably to weigh them down.

A body is brought ashore from the Mekong River in Muang district, Nakhon Phanom province, on Dec 29 last year. Another body was found two days earlier in That Phanom district. (Photo by Pattanapong Sripiachai)

The real names of the two have not been made officially public, but are believed to be Surachai's aides.

Tests carried out by the Institute of Forensic Medicine matched genetic material from the first body to Sahai Kasalong's son, while the DNA of the second body matched samples provided by Sahai Phuchana's mother and son, he said.

Police investigators are seeking the cooperation of their Lao counterparts to search the house where the three had stayed, in order to find more clues that could shed some light into their disappearances and murders, said Pol Maj Gen Thanachat.

The fate of the well-known Surachai, whose real name is Surachai Danwattananusorn, is officially unknown.

Now 77, he had spent many years before his disappearance in prison on lese majeste and other charges since the 1970s, when he was a communist guerrilla in southern Thailand.

The three had not seen by friends in Laos since the middle of December.

Since 2016, at least two other Thai fugitives in Laos have disappeared under suspicious circumstances. They include prominent Pathum Thani red shirt Wuthipong Kochathamakun, alias Kotee.

Kotee was abducted by 10 men in black from his Vientiane home around July 29, 2017, forced into a waiting car and driven away. 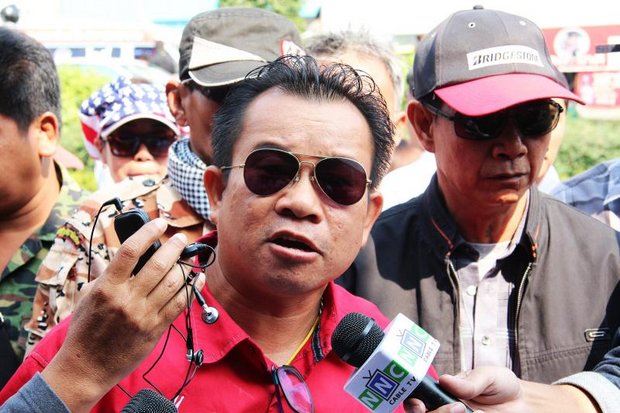 Wuthipong Kochathamakun, alias Kotee, was disappeared in July, 2017. He is shown talking to reporters in his political stronghold of Pathum Thani in January of 2014. (Photo by Pongpat Wongyala)

The military regime, through then National Security Council chief Thawip Netniyom, said Kotee likely "slipped away to create news" but claimed it had no further information.

Authorities deny any involvement in any of the disappearances, and note they have tried legal channels to have the suspects extradited.

While some Thai dissidents have managed to obtain political asylum in western countries, others who lack connections, documentation and funds are stuck in neighbouring Laos and Cambodia. Some have tried to keep doing political work over the internet, while others prefer to keep a low profile.

All live in limbo because of the transactional nature of official Thai relations with neighbours, who might regard it advantageous to hand over the fugitives.