Wait nearly over after years of delays by military regime

Election Commission chairman Ittiporn Boonpracong was quick off the mark, announcing an election date and a full timeline within hours of publication of the royal decree.

The general election will be held on March 24, the Election Commission (EC) announced Wednesday, just hours after publication of a long-awaited royal decree calling for national polls.

The government also said it believes a new House of Representatives and government should be installed by the middle of the year.

EC chairman Ittiporn Boonpracong said commissioners had met and agreed on March 24 after the royal decree was published in the Royal Gazette.

His Majesty the King signed the decree, which took immediate effect, so the EC could set the date.

The decree, countersigned by Prime Minister Prayut Chan-o-cha, required that the EC chairman implement it by Monday, but the EC had no problem taking the bull by the horns and announcing the election date within hours. 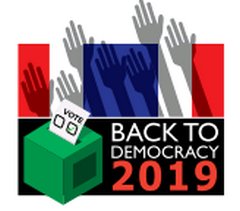 The EC is required by law to set the date and required to do so within five days of the royal decree being signed.

The EC was obviously fully prepared for the decree, as it also announced other poll-related schedules.

Jan 28-Feb 19 has been set as the period when people can register for advance voting. Candidates for the election can apply for registration from Feb 4-8. Each political party can also submit a list of up to three prime ministerial candidates during those five days.

Voters in foreign countries will be able to cast their votes from March 4-16. March 17 has been set as the date for voters to cast ballots in advance, regardless of whether they live in their constituencies or elsewhere.

Pro-election campaigners said they would call off planned rallies.

European Union Ambassador to Thailand Pirkka Tapiola wrote on Twitter that important steps have been taken towards restoring democracy in Thailand with the publication of the royal decree and the announcement of the poll date.

The spokesperson for the European Union in Brussels said the royal decree and setting an election date "are important steps towards restoring democracy in Thailand".

Today's Royal Decree enabling general elections to be held in Thailand and the Election Commission's subsequent announcement of 24 March as the election date are important steps towards restoring democracy in Thailand https://t.co/pjWemhCVTX

Another positive early comment was from the Ministry of Foreign Affairs of Denmark. A spokesman tweeted about, "Great news from Thailand", calling the election announcements "important steps ... towards restoring democracy.

"We look forward to seeing an inclusive and credible election," said the Danish statement.

In a press release from the US Embassy in Bangkok sent to media representatives, the United States "welcomes the official announcement that Thailand will hold elections" and "hopes for a result that reflects open debate and the will of the Thai people."

New Zealand ambassador to Thailand Taha Macpherson tweeted that the Kiwis "will continue to encourage and support Thailand on its path back to democratic government."

Announcement of 24 March as the date for Thailand’s general election is an important, welcome step forward. As a close partner and friend, NZ will continue to encourage, and support, Thailand on its path back to democratic governance.

A group of regional parliamentarians, the Asean Parliamentarians for Human Rights (APHR) issued a statement demanding that the regime "must remove all free speech restrictions" ahead of polling day.

Meanwhile, foreign media withheld their applause, with the Bangkok bureau chief of Reuters and others noting the campaign by the military to hold power after the vote.

An election first promised for 2015. Thailand's generals have been maneuvering to keep a hold even after a ballot, but will it be enough? Moment of truth. https://t.co/f4ZOWObnWP

Remember this election will be under a constitution designed to weaken Thailand’s most successful party, with provisions that may keep the junta in office even if its proxy party does badly - and giving the military long-term sway over future governments. https://t.co/rnaViSpgUv 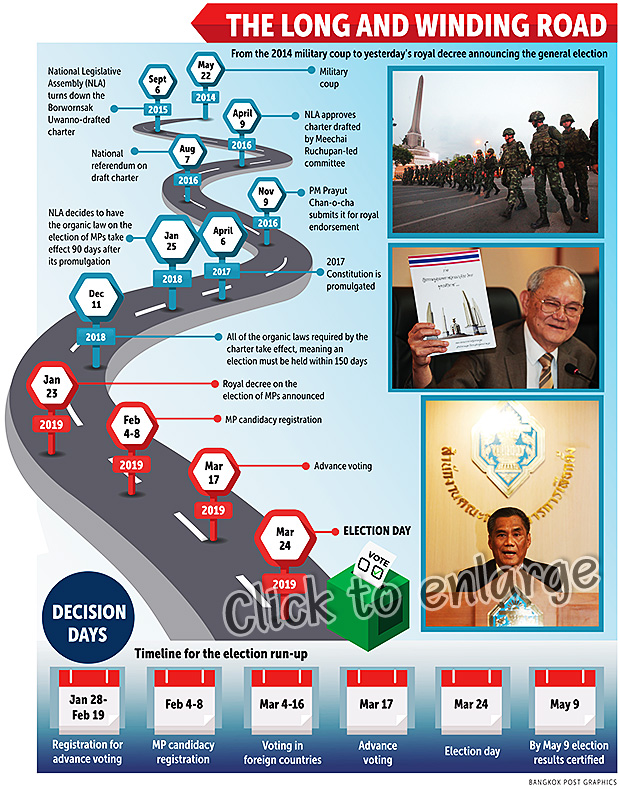 With the poll dates now fixed, political parties will have more than 50 days to campaign, Mr Ittiporn said - exactly 58 days in fact from Thursday through the last legal day to campaign on Saturday, March 23.

Asked by reporters whether the EC would try to announce at least 95% of the poll results by May 9, Mr Ittiporn said the organising agency would take this into account.

He referred to a constitutional provision which requires the EC to "complete" the election within 150 days of the law on the election of MPs taking effect. That happened on Dec 11, putting the deadline as May 9.

Debate is raging over whether the term "complete" refers to when "all ballots are cast" or when "all results are announced".

If necessary, the EC will discuss whether to seek a Constitutional Court ruling on the matter, Mr Ittiporn said.

By law, the EC is obligated to endorse the results within 60 days of the election.

Based on the new date for the poll, the EC will have less than 60 days to endorse at least 95% of the poll results. Under the constitution, parliament must convene within 15 days of almost all the results being announced.

After Wednesday's news, the PM's Office issued a statement about when the new House of Representatives and government should be in place.

Deputy Prime Minister Wissanu Krea-ngam, the cabinet's designated legal authority, said Gen Prayut will have until Feb 8 to decide whether to accept an invitation to become a candidate for prime minister on the ticket of any party.

Mr Wissanu said that even though the royal decree for the election has been issued, the government will continue to work as usual.

There are no legal requirements to forbid the government from approving important projects, though the government will need to prioritise them, Mr Wissanu said.

The military has already said it will submit plans to buy 14 more battle tanks from China in mid-March, an expenditure of 2.3 billion baht.

Government spokesman Buddhipongse Punnakanta said the regime will not serve as an interim government for the next two months but would continue with business as usual.

The government maintains full authority to run the country as stipulated by the constitution, he said.