Populist economic policies dominate many campaign pledges, as parties attempt to latch on to the flavour of the month and the remnants of Thaksinomics

Populist economic policies dominate many campaign pledges, as parties attempt to latch on to the flavour of the month and the remnants of Thaksinomics

After a series of false promises on a general election, Thailand is scheduled to hold one on March 24 after more than four years of military rule.

Election commissioners met and agreed on the date after a royal decree calling for the election of a new House of Representatives was published in the Royal Gazette on Jan 23.

With the military-drafted constitution looming over the post-election period, the bread-and-butter economic policies of the political parties are a crucial factor determining who will be in charge of Thailand's future.

"The economic policies of several political parties are geared towards populism to a greater extent," said Somjai Phagaphasvivat, an academic at Thammasat University. "There has been an increase in populism, seen as effective in drawing voters, with policies similar to those of the Thai Rak Thai Party. Populism has both positive and negative connotations. Policies with a negative connotation are those lacking fiscal discipline, incurring losses to the government budget and increasing public debt levels."

Whether one likes or despises Thaksin Shinawatra, the legacy of Thaksinomics still rings a bell with the general populace.

Coming into power in 2001 as Thailand reeled from the 1997 Asian financial crisis, the Thaksin-led Thai Rak Thai Party captured the hearts of the rural poor, who made up the majority of the population, through populist policies such as the 30-baht universal healthcare scheme, Village Funds, the One Tambon One Product programme and a debt moratorium for farmers.

Such policies continue to be heralded 18 years later, demonstrated by how the Pheu Thai Party, a third incarnation of Thai Rak Thai, and other political parties vie for votes using similar policies.

"This is the first time since probably the MR Kukrit Pramoj administration where each political party has concentrated on branding their policies," Mr Somjai said. "Such initiatives indicate that 'outlasting Thaksinomics' persists in their bread-and-butter policies." 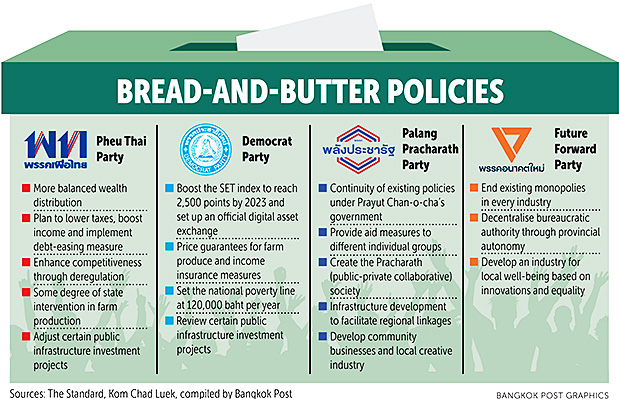 Still, no political party is elaborating mid- to long-term economic policies for sustainable growth, with fiscal discipline a missing piece, he said.

Growing populism is a force to be reckoned with, as such policies have hampered countries in Latin America, Mr Somjai said.

For Duncan McCargo of the University of Leeds, the term populist in the Thai context has become a code for criticising pro-Thaksin parties.

"It is striking that all parties are adopting similar rhetoric and making claims that their policies will benefit the livelihoods of ordinary voters," Prof McCargo said. "Whether anyone believes them depends on what view voters hold of those parties and their leaders, rather than the policies themselves."

The perceived progressive policies of some parties depend on citizens' views, as they are all variations on a theme, but they are not the point of this election, he said.

"This election is in effect a referendum on the 2014 coup," Prof McCargo said.

While populism remains a campaign theme for many political parties, this election is a fight between those advocating democracy and the disbelievers, said Nipon Poapongsakorn, distinguished fellow at the Thailand Development Research Institute.

Since taking power in a bloodless coup four years ago, the Prayut Chan-o-cha government claims to have secured the nation's stability and improved economic growth.

But this stability came at the cost of banning political gatherings, arresting and detaining politicians and anti-coup activists, and imposing internet censorship on sensitive issues.

The new constitution ensures a central role for the military and gives elected politicians little room to manoeuvre. Democracy has been absent in Thailand the past five years, and it remains to be seen whether democratic values and mechanisms can stage a comeback at some point in the next decade or so, Prof McCargo said.

"Above all, it is really important that this election be fought on the central issue of the day: do people want to continue National Council for Peace and Order rule under another guise, or do they want a genuine civilian-led government," he said.

While the election may not be an exit strategy to solve Thailand's political conflicts, holding a general election will lessen the political pressure that has been in place for years, Mr Somjai said.

"It's like opening a water valve to release mounting pressure," he said.

The next government will face difficulties in managing Southeast Asia's second-largest economy, as it must steer the country through slower global economic growth and perceived instability among different political factions, Mr Somjai said.

This year's economic growth outlook is bleak, blunted by the Sino-US trade disputes, with the World Bank anticipating a further global economic slowdown, she said.

"If we get a government that does not specialise in economics, people's suffering will increase even more," Khunying Sudarat said. "It is up to the people whether they will choose a government with strength in the military or one that specialises in solving economic problems." 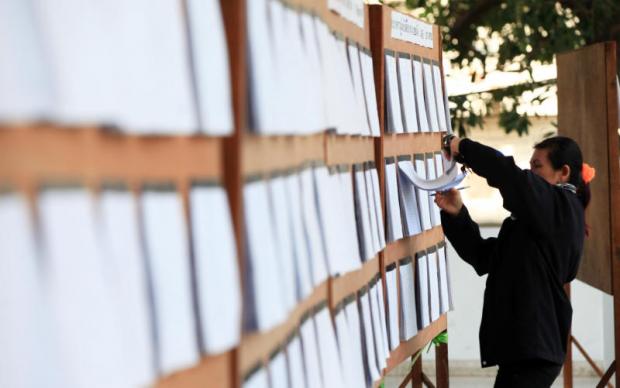 A voter checks her name at a polling station in Bangkok’s Laksi district. (Photo by Kitja Apichonrojarek)

Although Thailand faces severe problems, the Pheu Thai Party will not take long to solve economic woes because it is not difficult for the party to accelerate income generation, she said.

The party has a five-pronged economic platform to improve Thais' standard of living.

First, farmers will be empowered to determine crop prices by themselves. The party aims to build a strong Thai brand and market Made in Thailand labelling.

Second, small and medium-sized enterprises (SMEs) will be urged to use technology to expand into the global market.

Third, export volume will be improved by negotiating free-trade agreements.

Fourth, tourism revenue will be increased in all provinces without having to wait for infrastructure projects to be completed.

Fifth, the party wants to encourage a new generation of small businesses across the country to drive people's purchasing power.

As the oldest political party in Thailand, the Democrat Party aims to implement a sweeping series of reforms to shore up votes and address the country's protracted problems.

Insurance covering the cost of farm production will also be supported.

If elected, the Democrats plan to allow farmers to negotiate on prices and market access by integrating small agricultural cooperatives into a major cooperative categorised by types of crops, Mr Korn said.

Farmers will be encouraged to create their own niche markets through developing premium organic produce, he said.

Another policy addressing poverty is to set the national poverty line at 120,000 baht a year, Mr Korn said. Anyone living below that line will receive cash compensation from the government, with this measure replacing the existing daily minimum wage.

The party also wants to see the Stock Exchange of Thailand index reach 2,500 points by 2023 to reflect the country's growing economy, while creating a digital asset exchange to improve digital competitiveness.

According to party leader Abhisit Vejjajiva, the party will support local communities having joint ownership of land. The party plans to accelerate issuance of title deeds for landholders to replace inferior documents.

The party also wants to revise the China-Thailand high-speed rail project because Thailand would incur hefty losses if the Thai government is the sole project investor, Mr Korn said, citing a study on how the project's first phase linking Bangkok to Nakhon Ratchasima will not be beneficial, with gains offset by a motorway and dual-rail track connecting the two regions.

The party aims to develop a motorway in the southern region, reaching the Malaysia border, as well as a dual-track rail running from Bangkok to Padang Besar, he said.

The party's economic policies are largely based on the existing policies of Gen Prayut's government.

Party leader Uttama Savanayana said the policies came from the ideas of ordinary people the party met, along with brainstorms from party members.

The party wants to continue the existing welfare smartcards and provide low-income earners with more training to upgrade their occupations.

More measures to ease debt shouldered by workers, farmers, civil servants, SMEs, teachers and students will be introduced, he said.

Agricultural restructuring also needs to be continued to help farmers generate more income, with a focus on alternative crops, innovation and production, as well as cost reduction, Mr Suvit said.

The party will support the development of community businesses and community tourism, building facilities and infrastructure to access tourism destinations, he said.

The Northeastern Economic Corridor and Lanna Economic Corridor in the North are expected to link Cambodia, Laos, Myanmar and Vietnam, positioning Thailand as the hub of CLMV countries and Asean as a whole, he said.

For newcomer Future Forward Party, its economic policies are based on a paradigm of universal equality because Thailand's economic structure is chiefly driven by those sitting in the upper tier, not the grassroots segment.

For example, the country is reliant on export growth, and 40% of annual export value comes from fewer than 50 local companies, indicating an extreme economic concentration, said Sirikanya Tansakul, policy director of Future Forward.

"Thailand is dependent on a few groups of companies to mobilise the economy, while roughly 1,000 large companies pay 70-80% of total corporate tax," Ms Sirikanya said. "In addition, Bangkok is the economic hub, but the country has not decentralised into major provincial cities."

The party will emphasise economic efficiency through a bottom-up approach via three mechanisms: decentralisation, basic infrastructure improvement and development of agricultural tourism.

Ms Sirikanya said decentralisation means injecting capital stimulus directly into all provinces, allowing each to design its own method to improve the local economy.

Improvement of basic infrastructure is an agenda item for public transport nationwide, she said.

For agricultural tourism, the policy aims to reduce congestion in major tourism spots and develop targeted industries in each province.

"Thailand should not be a follower, running behind others," Ms Sirikanya said. "We need to improve with new industries that have fewer players, like artificial intelligence and automation."

The country must have many reform programmes, such as state welfare covering all ages, and tax reform by imposing land and property taxes and cutting Board of Investment (BoI) incentives in less efficient industries, she said.

Revoking personal income tax deductions for high-income earners and implementing education reform to upgrade skilled labourers are other initiatives for the party. Another goal is increasing people's long-term income.

While some policies of past governments can be continued if they match the party's development paradigm, such as the regulatory guillotine, the party aims to revise the EEC scheme because it's the wrong approach to attract new investment flows, Ms Sirikanya said.

"The BoI received double the investment applications recently, mainly for the EEC," she said. "But if you take a look at the bigger picture, total applications have not increased significantly. This means investment flows are concentrated in a group of provinces, not the whole country, while the concession for a high-speed railway linking three airports near the capital has not been transparent."

BURI RAM: A woman was killed by lightning in Prakhon Chai district of this northeastern province on Saturday afternoon. Her husband, their son and daughter and another woman sheltering under the same tree were unhurt.