Candidates fill the Bangkok Youth Centre in Din Daeng district hoping for their preferred ballot paper number on the first day of registration for the March 24 general election. (Photo by Chanat Katanyu)

Hopeful candidates flocked to designated registration centres across the kingdom on Monday, day one of the registration period for the March 24 general election.

The busiest centres were in Bangkok, which has most constituency seats on offer, Nakhon Ratchasima -- the second largest number of electorates -- and the southern region, where the Democrat Party is up against the party set up by its former secretary-general and political influencer Suthep Thaugsuban.

In Bangkok, 446 candidates of various parties gathered at the Bangkok Youth Centre in Din Daeng district in the morning,  all with the same goal -- to get the number they wanted. The Election Commission office in Bangkok had to draw the numbers.

Deputy City Clerk Silapasuay Raweesaengsoon said the application process in Bangkok went smoothly throughout the morning, with no hassles.

Unlike previous polls, in this general election political parties will not have the same number in every constituency. In another change, voters will cast a ballot for a constituency MP and a party-list MP.

The EC has set candidacy registration to end on Feb 8.

In Nakhon Ratchasima, Suriya Juangroongruangkit, a former key figure of Pheu Thai, led Palang Pracharath candidates to register. Pheu Thai countered by sending a candidate for the prime ministership, Chadchart Sittipunt, to lead the party parade to the registration centre at Chatchai Hall in Muang district.

Pheu Thai, Chartpattana and Bhumjaithai all claim they will win the contest for seats in Nakhon Ratchasima. The province is a strong base of the Chartpattana Party led by former leader Suwat Liptapanlop. (continues below) 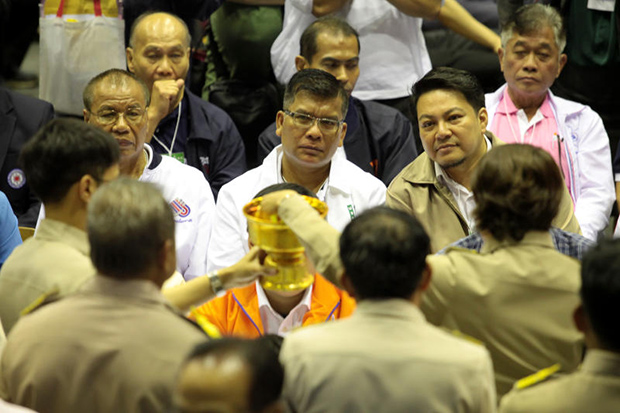 Election officials at the Bangkok Youth Centre draw ballot numbers for MP hopefuls in Bangkok after they registered. (Photo by Chanat Katanyu)

One of the most watched regions will be in the South, where the Democrats must defend a former stronghold against a challenge by the Action Coalition for Thailand (ACT) Party of Bangkok Shutdown street protest leader Suthep.

Mr Suthep's younger brother, Thani, and other relatives are running for seats in all constituencies in Surat Thani, a province dominated by the Democrats when Mr Suthep was the party playmaker.

The two parties have taken opposing positions. The country's oldest party will not support an outsider as prime minister, while Mr Suthep's banner was set up especially to help coup leader Gen Prayut Chan-o-cha remain in power.

Former Democrat leader Chuan Leekpai said in Trang he was confident the party still had the trust of voters in the southern provinces.