'Pai' likely to be released soon

Jatupat 'Pai Dao Din' Boonpattararaksa (centre) is greeted by his parents at the Khon Kaen military court on Monday. (Photo by Chakkrapan Natanri)

KHON KAEN: Activist Jatupat “ Pai Dao Din” Boonpattararaksa may be released from prison soon after a military court dropped two illegal assembly cases against him and six other activists.

The court decision came after the junta abolished its 2014 announcement criminalising political assembly of more than five people on Dec 11 last year ahead of the general election.

Jatupat, who is doing time for lese majeste and computer crime offences in Khon Kaen, was brought from the provincial prison to hear the court order at noon on Monday. The other six defendants in the two cases, including pro-democracy activist Rangsiman Rome, joined him at the Khon Kaen military court.

One of the cases that were dropped involves a symbolic protest in May 2015 at the Democracy Monument to mark the first anniversary of the military coup, Anon Nampa, their lawyer, said.

The other case involves the organisation of a forum on “Speak up for Rights and Freedom” at Khon Kaen University in late July 2016 ahead of the constitution referendum, he said.

“The court order today ends all political cases against the Dao Din group. Pai, however, is doing time for lese majeste for which he was sentenced to two years and six months in jail. He will fully serve in June.

“Since Pai only has four months to serve in that case, we’ve already submitted an application for a penalty suspension to the Justice Ministry,” Mr Anon said. (continued below) 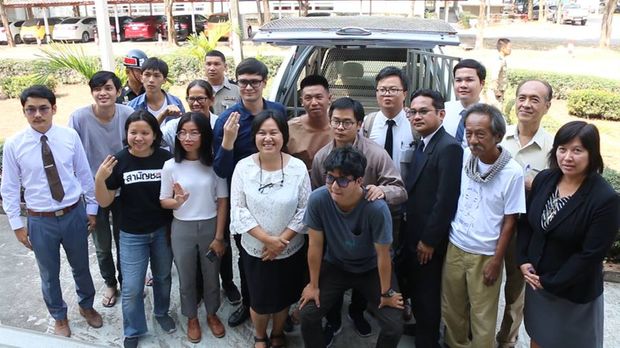 Jatupat 'Pai Dao Din' Boonpattararaksa, six other activists, their families, lawyers and supporters pose for a photo at the Khon Kaen military court on Monday. (Photo by Chkkarapan Natanri)

The law allows for a penalty suspension if the remaining time is not more than one third to one fifth, depending on a prisoner’s behaviour.

Jatupat was charged with lese majeste and violating computer crime law for sharing a BBC Thai Facebook post on His Majesty the King's biography which 2,600 others had also shared.

He was arrested in December 2016 and his 11 bail requests were denied. He confessed unexpectedly in August 2017 and the court sentenced him to 2½ years in jail.

Jatupat, now 28, is widely known as Pai Dao Din, his nickname and the name of the activist group to which he belongs. Dao Din, based in the Northeast, has helped villagers campaign and fight to protect their land and natural resources.

In April 2017, Jatupat was awarded the 2017 Gwangju Prize for Human Rights from the South Korea-based May 18 Memorial Foundation while still in prison, the second Thai to be honoured after Angkhana Neelaphaijit, a human rights commissioner and wife of disappeared human rights lawyer Somchai Neelaphaijit.

LIMA - Protesters who have brought parts of Peru to a standstill for weeks closed in on Lima's international airport Tuesday as lawmakers mulled bringing elections forward in a bid to end the deadly mobilization.