Khunying Sudarat Keyuraphan of Pheu Thai Party and Pol Gen Seripisuth Temiyavej of the Thai Liberal Party shake hands as they meet at the Election Commission's office to submit their party lists on Tuesday. (Photo by Kitja Apichonrojarek)

Some 6,800 aspiring candidates from 61 parties applied to contest in 350 constituencies in the March 24 election in the first two days of the application, according to the Election Commission.

EC secretary-general Charoongvit Poomma said on Tuesday evening 883 people applied on Tuesday, bringing the total to 6,828, a jump from 2,422 in the 2011 poll.

“The upbeat political sentiment and a different election system have fuelled the interest since constituency votes will be counted as party votes,” he said.

The all-votes-count to be used in the upcoming election has driven parties to field as many candidates as possible, even in constituencies they have little hope of winning because MP votes will also be counted as party votes. (see chart)

In previous elections, the first-past-the-post approach was used. Voters were given two ballots -- one for constituency MPs and the other for their favourite parties, which were not necessarily the same as the parties of their MPs. The winner in each constituency would then become MPs while the votes for the runners-up were for nothing. 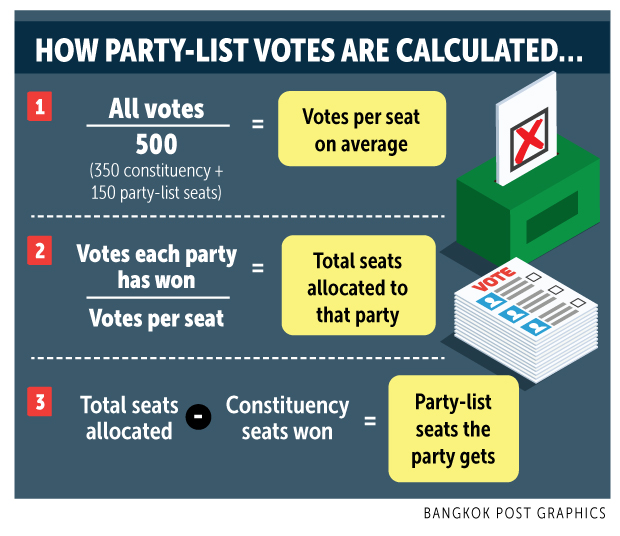