Chadchart may run for Bangkok governor if Pheu Thai loses

Chadchart Suttipunt of Pheu Thai has several ways to help the party if it comes up short in the election, including a run for Bangkok governor. (Photo by Wichan Charoenkiatpakul)

Chadchart Sittipunt has a backup plan if the Pheu Thai Party ends up on the opposition bench in the general election.

Mr Chadchart on Wednesday confirmed his interest in running for Bangkok governor as one of his options if Pheu Thai loses the upcoming poll on March 24, denying him the chance of a cabinet position.

Mr Chadchart was one of the most popular cabinet ministers in the Pheu Thai-led government under then-prime minister Yingluck Shinawatra. As transport minister, he is remembered for his push for Thailand to build high-speed trains -- which he said would redistribute wealth from Bangkok to other provinces along the routes.

Pheu Thai has chosen him as one of its three prime ministerial candidates, along with Khunying Sudarat Keyuraphan and Chaikasem Nitsiri. But his decision to withhold his name from Pheu Thai's party-list candidate roster has raised eyebrows, as it means he will not become an MP.

The Pheu Thai member said on Tuesday that he had informed the party board that he was not inclined to take up lawmaking duties, but was interested in participating in the Bangkok gubernatorial election.

On Wednesday, Mr Chadchart confirmed the plan. "There are many ways I can help the party. I can be a consultant, helping to formulate our platform, and I could contest the Bangkok governorship," he said. "But that is in the future."

Pheu Thai was confident it would win the Bangkok gubernatorial election in 2013 with Pol Gen Pongsapat Pongcharoen as its candidate -- but the party lost to its rival, the Democrat Party, whose incumbent governor MR Sukhumbhand Paribatra successfully defended his position. 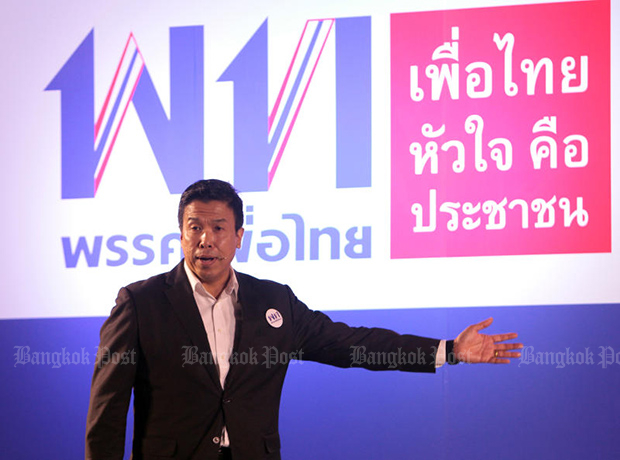 Chadchart Suttipunt talks to Pheu Thai members on Dec 21, 2018 as the party began to prepare for the election. (Photo by Tawatchai Kemgumnerd)

In the 2011 election, Pheu Thai won a majority in the House, with 265 out of 500 seats. This time it will compete against its old rival, the Democrat Party, along with the new Palang Pracharath Party, which has nominated Gen Prayut Chan-o-cha as a candidate for the premiership.

Suriya Juangroongruangkit, who is directing political strategy for Palang Pracharath in the northeastern region, on Monday boasted his party would win at least 150 of the 500 seats up for grabs in the election.

Mr Chadchart of Pheu Thai, however, thought otherwise. "I do not think we will lose," he said on Wednesday.