Nataphol top of list 'due to trust'
Thailand
General

Denies being rewarded for PDRC leadership

Nataphol Teepsuwan speaks for the Palang Pracharath Party (PPRP). He was a leading organiser of the 2013-14 Bangkok Shutdown movement but insists his current position is not a reward for those days. (Photo FB/NatapholBKK)

Palang Pracharath Party (PPRP) deputy leader Nataphol Teepsuwan has denied he was given top spot on the PPRP's party list as a "reward" for being a co-leader of the now-defunct People's Democratic Reform Committee (PDRC).

He was speaking after the PPRP delivered the names of 120 party-list candidates to the Election Commission on Thursday.

Mr Nathapol said he was placed first on his party's list because he has the trust of party leader Uttama Savanayana, a former industry minister, and party secretary-general Sontirat Sontijirawong, a former commerce minister.

Mr Nataphol said Mr Uttama and Mr Sontirat are not eligible to stand as poll candidates due to a rule stating that all candidates must have quit political positions 90 days prior to applying for candidacy, which began on Monday.

Mr Nataphol said that while he was proud to be part of the PDRC, he now has to focus on being an MP candidate.

The PDRC spearheaded the anti-government mass demonstrations against the Pheu Thai-led administration in late 2013 that culminated in the May 2014 military coup.

Mr Nataphol also brushed aside reports that some party members were unhappy about their party-list placements. The party's poll candidate selection committee did its best to allocate party-list spots based on their experience, he said.

According to political pundits, those placed high on a party list will be the usual bigwigs who are believed to have been allocated cabinet seats, provided their party helps form a coalition government. 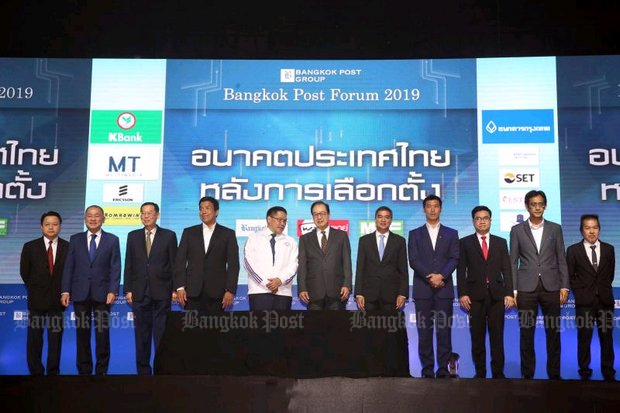 Mr Suriya, a former transport minister, is part of the so-called Sam Mitr (Three Allies) political group, which is widely known to be the driving force behind the mass defections by high-profile politicians from the Pheu Thai Party to the PPRP.

The third spot is occupied by Buddhipongse Punnakanta, who resigned as a government spokesman on Tuesday to become a PPRP party-list candidate, and fourth on the list is former industry minister Somsak Thepsuthin, also from Sam Mitr, who is now in charge of the PPRP's election campaign.