The nomination of Princess Ubolratana as a candidate for prime minister under the Thai Raksa Chart Party banner has sparked questions over its legality with academics calling for clarity over the princess' current royal status.

However, the princess, 67, posted a message on her "nichax" Instagram account yesterday saying that she wanted to make it clear that she had relinquished her royal titles and is now an ordinary person.

"I want to exercise my rights and freedom as a commoner under the constitution, and I have given the Thai Raksa Chart Party consent to nominate me as its candidate for prime minister.

"My decision to allow the Thai Raksa Chart to register my name as a candidate for prime minister demonstrates my freedom and rights, with no privileges over other people, as stated in the constitution," she wrote.

She asked for the opportunity to bring prosperity to the country and thanked all Thais for their love and support. "I am deeply touched," she said.

Her message was posted hours after Thai Raksa Chart officially registered her name as its prime ministerial nomination with the Election Commission (EC).

Princess Ubolratana is the eldest child of King Bhumibol Adulyadej, Rama IX, and Queen Sirikit. She is the elder sister of His Majesty the King. She relinquished her royal titles in 1972.

The announcement was a profound and unprecedented development that had created a "political earthquake", said Thitinan Pongsudhirak, director of the Institute of Security and International Studies at Chulalongkorn University.

Noted scholar Kaewsan Athibodhi on Friday posted an article on Thai Post Online saying that it is necessary for all involved to clarify the princess' current status within the royal institution.

"A clear line must be drawn because this is very significant under the constitution," Mr Kaewsan wrote. "The royal institution is a major pillar of the nation and it is supposed to be above politics," he said.

Mr Kaewsan said that if a member of the royal family becomes part of the government, that person must be ready to be held accountable as a public office holder and be ready to face impeachment and criticism. 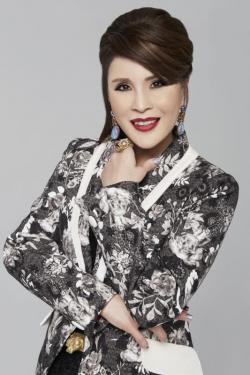 "In light of this, for the sake of protecting and safeguarding the monarchy, it is necessary to make clear that the princess is distancing herself from the royal institution completely," Mr Kaewsan said.

The pro-regime People Reform Party on Friday asked the Election Commission (EC) to rule if the Thai Raksa Chart Party has violated the election law in putting forward Princess Ubolratana.

Party leader Paiboon Nititawan submitted a letter to the EC asking that it order Thai Raksa Chart to suspend the nomination.

"Although Princess Ubolratana relinquished her royal titles, she is still part of the royal family," Mr Paiboon said.

He said he had quoted the Constitutional Court as saying the King, the Queen and members of the royal family from the rank of Mom Chao up were part of the royal institution and, as such, above politics and required to stay neutral.

EC secretary-general Jarungvith Phumma asked all parties not to use pictures of their prime ministerial candidates for election campaigns until the EC officially announces the names of the candidates by Feb 15.

Thai Raksa Chart secretary-general Wim Rungwattanachinda said the party would not use pictures of the princess or her name for campaigning.

"I assure you that the party will neither post images of the princess anywhere nor use them for campaigning,'' he said.

Also on Friday, Prime Minister Prayut Chan-o-cha formally accepted an invitation to stand as a candidate for prime minister under the Palang Pracharath Party's banner.

Gen Prayut, head of the National Council for Peace and Order (NCPO), announced his decision in a message to the Thai people on Friday.

In the announcement, he said violent political conflict and disunity had plagued the country, stalled national development and affected people's lives, democracy-based law enforcement and the exercise of administrative, legislative and judicial power for over a decade before the NCPO took over the national administration.

There had been an unprecedented and critical deadlock in the country and no way out could be foreseen at that time, he said.

The NCPO and his government had solved the situation, restored peace and national order and brought economic development and political stability. 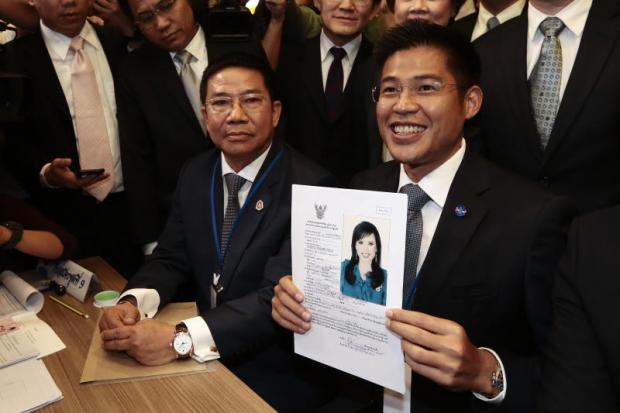 Thai Raksa Chart leader Preechaphol Pongpanich shows a document nominating Princess Ubolratana as the party's PM candidate at the Office of the Election Commission in Bangkok on Friday. Photos by Patipat Janthong