Colourful floats took aim at politics, pollution and persecution at the annual Thammasat-Chula football match on Saturday afternoon at the National Stadium in Bangkok.

Few topics were off-limits for the students, who nonetheless had to run the usual gauntlet of humour-challenged authorities who showed up to keep a close watch on proceedings.

A favourite theme was the banquet hosted by Palang Pracharath in mid-December, when the pro-regime party claimed to have raised 650 million baht from 200 tables.

The CU team showed off a banquet table with a map of Thailand on it. The map was divided into pieces for rich people to feast on.  A banner on the CU side of the stadium said: “Banquet catering for hire. Starting at 650 million baht.”

After much speculation, Palang Pracharath disclosed, as required by law, banquet proceeds of 90 million baht, far short of the previous boast, raising the question how much it had really raised. The Election Commission is looking into the case.

Another card stunt, also on the CU side read: “Banquet, anyone?”

Chula students also presented a float featuring a ballot box, with a man in green and a very long nose with a placard reading “Oust me if you can” — a reference to Gen Prayut Chan-o-cha’s recent angry outburst when asked if he should resign if he became a prime ministerial candidate. 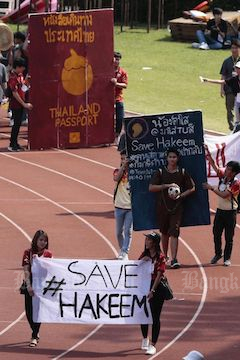 The case of refugee footballer Hakeem al-Araibi was on the minds of the Thammasat marchers. (Photo by Patipat Janthong)

Next came a giant ATM with 500-baht banknotes streaming from its slot, referring to the 500-baht cash handout to low-income earners from the military government in the run-up to the election.

Thammasat marchers entered the stadium with “Game of Trade”, reflecting the tensions between the US and China. A captain with a Twitter-logo shield, representing Donald Trump, was partially surrounded by a border wall. Behind the Great Wall was Winnie the Pooh. References to the lovable bear are censored in China as people have been using images of the Pooh character when they want to mock leader-for-life Xi Jinping.

Another TU float showed what looked like a vacuum cleaner with Gen Prayut’s face, a reference to the way veteran MPs from other parties were sucked up to form a new party. The device was also propped up by men with different party logos indicating parties pledging their allegiance to Gen Prayut.

Another election float aimed to convey the view that the March 24 poll does not reflect the will of the people but is rather a tool to perpetuate power.

The fourth TU float showed a monument with a “Section 44” banner.

A highlight from TU was a float featuring Hakeem al-Araibi, the Bahraini footballer now detained in Thai prison despite his refugee status in Australia. It showed a handcuffed man holding the ball and wearing prisoner’s garb.

Another banner — “Taxpayers’ money = campaign funds” — touched on the reluctance of four ministers to resign for several months after they joined PPRP.

The students also made sure that a scandal starting to fade from the headlines will not be forgotten. Their banner read: “Por Por Chor [National Anti-Corruption Commission]… National ‘Pok Pong Pom’ [Protecting ‘Pom’]”, a reference to the nickname of Deputy Prime Minister Prawit Wongsuwan, who was in the hot seat over more than 20 very expensive watches he claimed to have borrowed from a now-deceased friend. He was later cleared by the NACC.

By the way, Chulalongkorn University won the football match 2-1. Of the 73 matches played since 1934, Thammasat has won 24 matches and Chula 17, with 32 draws. 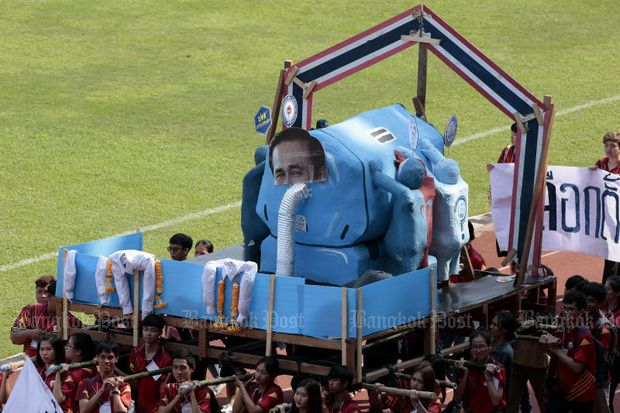 A Prayut vacuum cleaner sucking up veteran politicians for inorganic growth of a new political party. (Photo by Patipat Janthong) 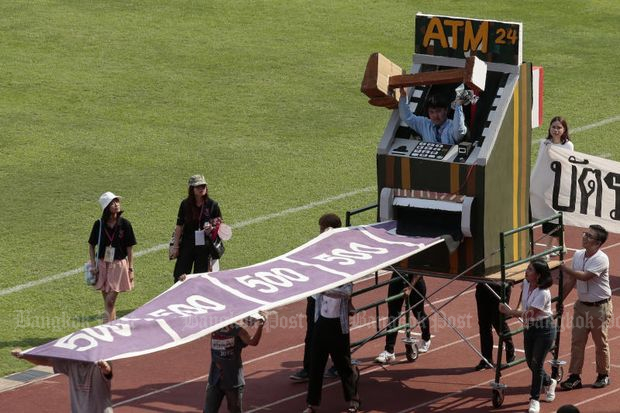 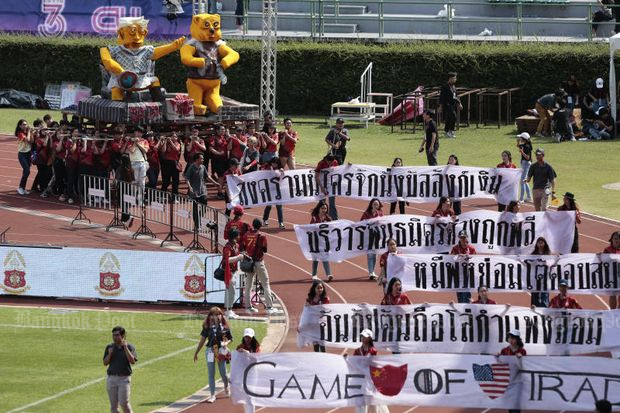 A Donald Trump-Xi Jinping reference to the trade war. (Photo by Patipat Janthong) 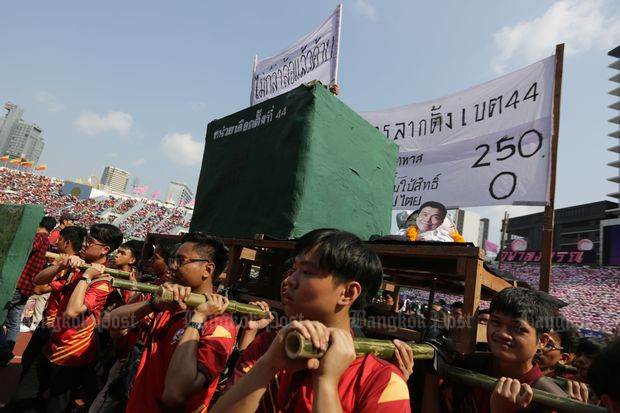 A ballot box and the result of votes at a polling station. (Photo by Wichan Charoenkiartpakun) 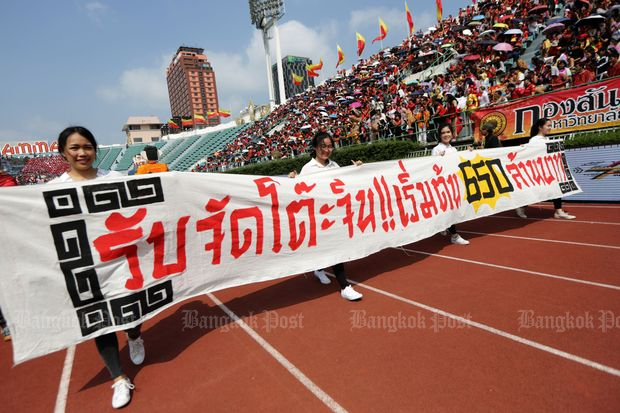