The Supreme Court has upheld the sentencing of six former leaders of the yellow-shirt People's Alliance for Democracy to eight months in jail each for breaking into Government House in 2008.

Public prosecutors earlier arraigned them on charges of breaking into Government House and damaging property there during the protests they led against the Samak Sundaravej government from May to December 2008.

Demonstrators forced their way into Government House on Aug 26, 2008. During their occupancy they caused damage to lawns, decorative plants, sprinklers, lighting and surveillance cameras put at nearly 7 million baht.

In 2015 the Criminal Court sentenced the six to two years' jail each, commuted from three years due to their useful testimony. The Appeal Court reduced their sentences to eight months in jail, commuted from one year.

Pending the outcome of their appeal to the Supreme Court the defendants had been released on bail, except for Sondhi, who is serving a sentence for securities commission crime.

The Supreme Court ruled that their demonstration was not peaceful, as they claimed, because their supporters broke into Government House.

The court also dismissed their request for the suspension of imprisonment, saying Government House was the centre of national administration and demonstrators had damaged a lot of government property.

All were taken to Bangkok Remand Prison after the ruling was read out. 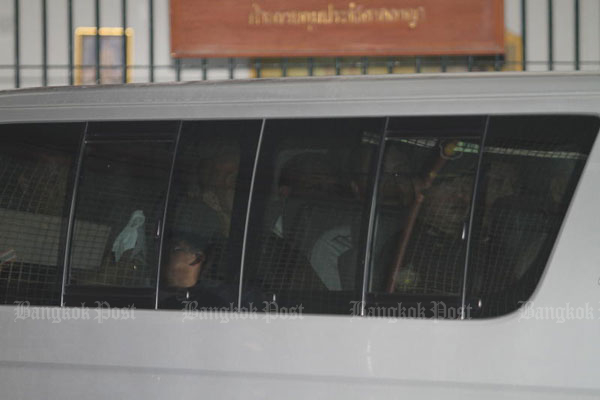 A Corrections van takes the yellow-shirt leaders from the Criminal Court to Bangkok Remand Prison after the Supreme Court judgement was read out on Wednesday. (Photo by Apichart Jinakul)