Party members to convene on Monday

The Constitutional Court on Thursday accepted an Election Commission (EC) request for a hearing to dissolve the Thai Raksa Chart Party (TRC) for nominating Princess Ubolratana as its candidate for prime minister.

After considering the EC’s request for more than an hour, the court announced the judges had unanimously agreed to accept the case for trial.

The TRC is required to submit its defence within seven days of receiving its copy of the EC’s complaint. The court has scheduled the next hearing for Feb 27, though a ruling would not be announced that day.

The court did not order the TRC to cease election campaigning, or any other political activity.

Chaowana Traimas, sec­-retary-general of the Office of the Constitutional Court, said the court would set a date for a ruling when it is finished examining the case.

Shortly afterwards, Mitti Tiyapairat, the TRC’s secretary-general, received a copy of the EC’s complaint, which was delivered by the court’s staff to the party’s headquarters on Chaeng Watthana Road in Laksi district.

Phichit Chuenban, the TRC’s legal adviser, said the legal team will spend the weekend preparing the party’s defence, and the party’s executive board is expected to convene on Monday to discuss the matter further. 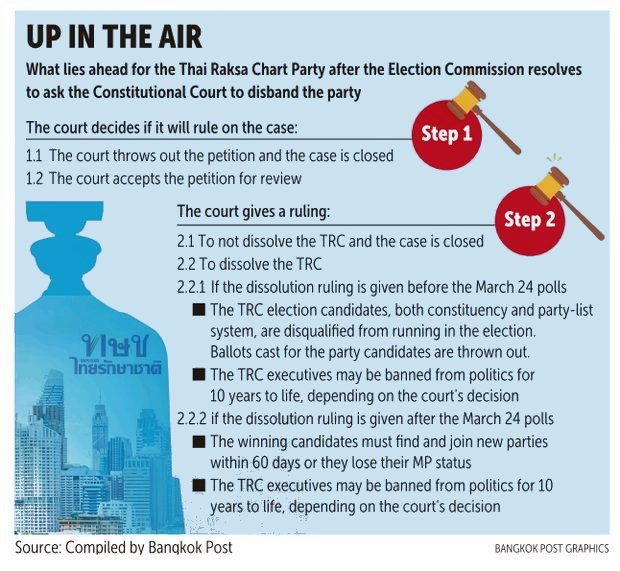 The EC had recommended the court disband the party for violating the spirit of the constitutional monarchy and the 2017 Political Parties Act by nominating Princess Ubolratana as its prime ministerial candidate last Friday.

The recommendation, according to the EC, is based on Section 92 (2) of the 2017 organic law on political parties, which allows the EC to propose the dissolution of a party to the court if it has obtained enough evidence that the party committed an act deemed hostile to the monarchy.

On Feb 8, His Majesty the King issued remarks that ended Princess Ubolratana’s nomination - saying that although she had relinquished her royal titles, the princess is still a member of the royal family and as such, must remain outside of politics, and that the attempt to get the princess involved in politics was highly inappropriate.

Subsequently last Monday, the EC rejected Princess Ubolratana’s nomination, and on Wednesday asked the court to dissolve the party.

Some parties have exploited the episode to demand TRC’s dissolution among other punishments. Some reports suggest its executives may also face a life-time ban from politics.

Mr Ruengkrai accused the EC of dereliction of duty for failing to hear the party’s explanation before seeking its dissolution.

Meanwhile, a group of activists who calls itself “People Who Want Elections” gathered outside the court to oppose the EC’s recommendation.

In light of the action being taken, TRC’s key election strategists and campaigners have decided to stop campaigning, leaving constituency candidates to canvass for votes alone.

Nattawut Saikuar, TRC’s chief campaigner, said the party’s candidates in about 100 constituencies would continue meeting voters, but the campaign teams from the party’s headquarters would suspend their field activities until the court reaches a decision.

“The issue is sensitive. Making speeches before crowds of people would not go down well,” said Mr Chaturon. “We should focus on the preparation of our defence at the court ... We will not make any explanations to people pending the hearing.”

He said the absence of key party figures would not seriously affect candidates’ election campaigns. When asked if his and Mr Nattawut’s absence from the party since Feb 8 was indicative of a rift within the TRC, Mr Chaturon said there was no split, and that he is ready to support the party through the hearings until a decision is reached.