Hashtags on the hustings
Thailand
Politics

Hashtags on the hustings

Political rookies in Thailand are embracing hashtag campaigns to make their way to the House.

Finally, the spirit of democracy seems to have returned to Thailand. Since the end of last month, electoral banners have returned to pavements, causing mixed feelings -- excitement from voters and complaints from footpath users.

Politicians held back by the junta government for over four years have returned to their communities, giving hope and promising to make voters' lives better.

These scenes are like re-runs of a TV series with the same scripts and familiar characters.

Amid such familiar and occasionally jaded encounters between the public and candidates, social media campaigns have made a big splash, helping to enliven the March 24 election.

One hashtag campaign which has taken off in past weeks is #fahrakpor (Fah Loves Dad). The creator is anonymous but the hashtag is associated with an image of Thanathorn Juangroongruangkit, the leader and founder of the Future Forward Party.

Mr Thanathorn is a political rookie and a billionaire, an heir to Sammitr Group, his family business.

The tag #fahrakpor made him instantly popular with the masses and elevated his status to net idol. The image of Mr Thanathorn went viral after he visited the annual traditional football match between Chulalongkorn University and Thammasat University on Feb 9.

Many young teenage girls have joined his fan club, admiring his muscular build and spiky hair.

The hashtag climbed to the top of the Thai Twittersphere, followed by a hashtag named after his party.

This slogan does not contain any messages about political policies that the party supports. The "fah rak por" phrase comes from a line in a TV soap opera eight years ago.

The popularity of this campaign has inspired other politicians to follow in Mr Thanathorn's footsteps.

Among them is Kanawat Chantaralawan, a 29-year-old MP candidate from the Democrat Party.

Relatively unknown, Dr Kanawat created his own hashtag by borrowing a word from the other tag to introduce himself.

Some politicians such as Parit Wacharasindhu, a novice politician from the Democrat Party, are also using a social media campaign to promote the party's activities.

Mr Parit, nephew of the party's leader Abhisit Vejjajiva and a contender in this election, uses a hashtag offering people the chance to hug Democrat Party politicians as a symbol of unity and peace.

This is the first time that hashtag campaigns have been exploited in a Thai national election, according to Warat Karuchit, deputy dean of Graduate School of Communication Arts and Management Innovation at National Institute of Development Administration (Nida).

Social media campaigns are common in Western countries for both politics and activism. The tag is often a message and short slogan related to the core message of the campaign. 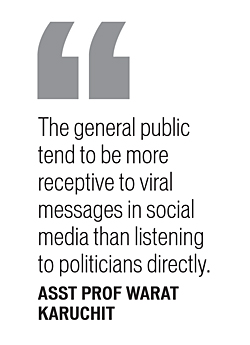 "A hashtag is an efficient way to create new trends and cause a sensation," Asst Prof Warat said.

"It is a cheap marketing communication tool because it just uses the Twitter platform to circulate the content.

"It can create more acceptance because the hashtag slogan is repeated and shared by a mass audience.

"The general public tend to be more receptive to viral messages in social media than listening to politicians directly."

The method is ideal for relatively unknown candidates, especially those with limited budgets.

The idea is to catch people's attention by using a catchphrase.

Campaigners might use a slogan that links to the party's philosophy. But most successful viral hashtags must be something fresh, new and attention-grabbing.

The phrase or slogan does not have to be related to the core of a political campaign. "Some words such as 'welfare state' or 'development' are too dull to create a hashtag sensation, while some slogans that are funny or entertaining might go viral easily," Asst Prof Warat said.

The strategy works with new people and politicians, not veterans or older people who have been in the public sphere for long period of time.

A good example at point is Sereepisuth Temiyavej, a retiree and founder of Seeree Ruam Thai Party.

Pol Gen Sereepisuth has tried to exploit the success of the fahrakpor hashtag by inventing his own variant.

The cheap and sure bet to create a sensation by campaigning on social media is not without its downsides. Viral campaigns are known to be short-lived -- sometimes just a few weeks. Flashy slogans without a core message can lose momentum in a week.

"So, political campaign strategists must always find a new story or tactic to make the candidate interesting, " Asst Prof Waruat said. "This method is like a marketing campaign that companies must use to offer new things to wow consumers."

Another downside of this campaign method is that the slogans might be fabricated. A hashtag without an attributed source might be sponsored by political parties. Politicians must also be beware that viral campaigns can be used for mudslinging or counter attacking. While campaigns can create popularity they are also an effective way to destroy a party's popularity too, Asst Prof Warut warns.

Exciting and fresh, viral hashtag strategies are perfect to attract young people. Many communication experts and political pundits are aware that hashtags are being used in this election campaign to woo first-time voters.

First-time voters -- about one seventh of the total eligible 51 million voters -- have been coveted by many parties. "They are inexperienced and have never voted for any parties before. So, no surprise if parties want to introduce themselves and candidates to this group," Asst Prof Warat said.

Mana Trirayaphiwat, the dean of the School of Communication Arts, University of the Thai Chamber of Commerce, said first-time voters can be a game changer. "Politicians are using catchy words in their campaigns and hire people skilled at digital marketing as well as 'influencers' to spread the word," Mr Mana told the Bangkok Post.