Leading TRC members on Thursday announced they would quit canvassing for votes after the Constitutional Court accepted a petition from the Election Commission (EC) to dissolve the party. 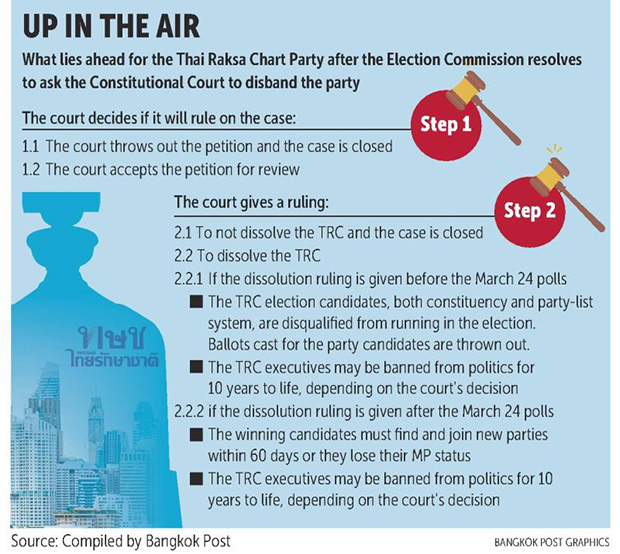 In a U-turn on Tuesday, chief campaign strategist Chaturon Chaisaeng announced the party would heed calls from party members and candidates to resume campaigning for the March 24 election.

Canvassing started immediately after the announcement in Bang Na district of Bangkok. Mr Chaturon indicated that major rallies could be held -- but executive members of the party would not join them as they were preparing for a court fight.

The court has set Feb 27 for the case to start.

The future of TRC hangs in the balance after the court took up the EC petition on Thursday. The poll overseers claimed the party had violated the Political Parties Act by nominating Princess Ubolratana on Feb 8 to be its prime ministerial candidate. 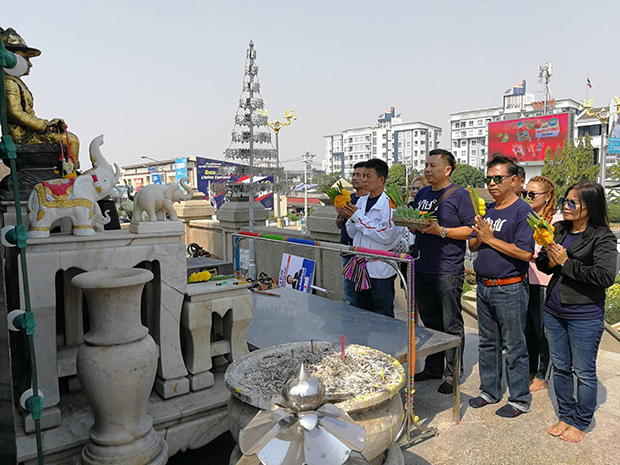 Pol Lt Col Kittirit Poonsawad, contesting constituency 1 in Buri Ram for Thai Raksa Chart, and his staff make a wish to save the party at the King Rama I statute in Muang district on Thursday. (Photo by Pikool Kaewhawong)

TRC key members have kept a low profile since the nomination day but the party's candidates running for MP seats have continued their campaigns. One of them, Pol Lt Col Kittirit Poonsawad, contesting constituency 1 in Buri Ram, even made a wish that the party would be saved at the King Rama I statute in Muang district on Thursday.

"I wish for the party to endure the crisis, but I will accept the ruling of the court," he said.

Vorasuda Sucarom, the candidate for constituency 1 in Kanchanaburi, said on her Facebook page on Feb 12 that she was continuing her campaign because she couldn't stand still, waiting for the ruling to be handed down.

"I am determined to move forward. I will go the distance and I will not give up," she wrote.