The Defence Ministry has leapt to the defence of military conscription, insisting there would be a shortfall of troops if only voluntary recruitment is adopted.

The remark comes as various party election campaigns have been calling for the abolition of compulsory conscription.

He said only 46% of eligible young men volunteer for service.

Moreover, just under a third of all drafted men request to have their military service postponed, leaving 70,000 in service, said Lt Gen Khongcheep.

After two years in service, around 1,800 apply to continue serving as soldiers, he noted.

"We want to see as many people as possible to volunteer. But the number is not that high," Lt Gen Khongcheep said. (Story continues below) 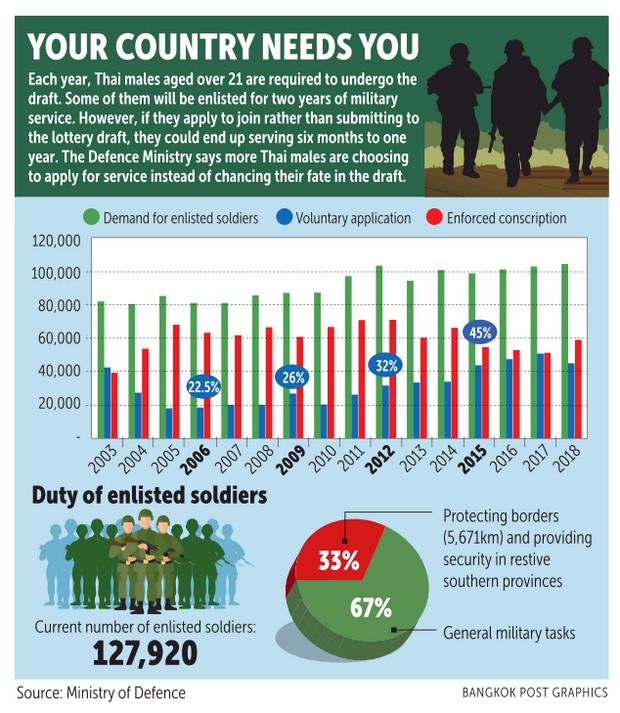 Around 33% of conscripts are deployed to border areas including the deep South near Malaysia, while the rest handle other tasks.

Of those 70,000 conscripts, some are on duty for just six months or a year, based on their education level, he said.

"Although we have people who volunteer to serve, it is not enough," Lt Gen Khongcheep said. "This is the reason why we have to use both volunteers and conscripts."

He said those who have undergone the territorial defence programme, known as Ror Dor, could also be exempt from conscription.

They are put on the reserve list and would be called up during a crisis.

Students who are at Grade 10-12, or Matthayom 4-6, have the right to apply to do the three-year Ror Dor programme.

Lt Gen Khongcheep said 39 European countries and superpowers still have a military draft, while another 29 countries, including Romania, France, Italy and Germany, are considering resuming conscription.

Responding to public concerns about the misuse of conscripts, including forcing them to serve as servants for their superiors at their homes, Lt Gen Khongcheep stressed that only a few such cases have come to light.

"We are taking into account human dignity, and refraining from using conscripts in an inappropriate way," he said.

"Soldiers being made to wash [their superior's] clothes, as shown in the TV drama Phu Kong Yod Rak -- we don't see that any more. Now we have washing machines do the job," said Lt Gen Khongcheep.

Several parties, including Pheu Thai, the Future Forward Party (FFP) and the Seri Ruam Thai Party, have made it clear they want an end to conscription and have been calling for this in their election campaigns.

Such calls have apparently not gone down well with army chief, Gen Apirat Kongsompong.

When asked last week about Pheu Thai's proposal to slash the defence budget and abolish conscription, Gen Apirat urged critics to listen to Nak Phandin, a Thai song which loosely translates as "worthless" or "burden on the land".

Lt Gen Khongcheep said parties should not exploit the issue to canvass for votes.

He added that defence officials are ready to listen to all opinions on the issue but said it was important to ensure such proposals "have no bearing on security tasks".

The spokesman nevertheless noted the military is ready to comply with the wishes of the government, which stands firm on the issue of scaling back the number of servicemen.

Touching on the issue of conscripts being beaten in their barracks, he said the military has a clear policy of barring seniors or superiors from physically abusing them, adding that offenders would face dismissal.

A referendum may be needed if it is to be scrapped given its importance to national security and the nation's welfare, he said.