The board of the state-owned broadcaster MCOT Plc has removed a host from a programme that she designed and hosted after it allowed students present in the studio to vote on certain political questions during a live debate. 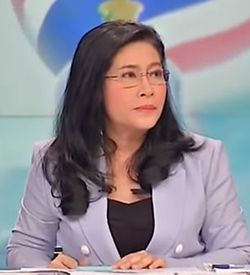 Orawan Choodee wrote on Facebook on Friday that she had received an order “relieving me of my duties as a subordinate” after the programme aired on Thursday.

The debate in question invited 10 first-time MP candidates and then asked the students in attendance four questions:

“My deepest respect to the innocent power of all 100 students from 16 institutions from Bangkok, the North, central region, the Northeast and the South, who expressed their opinions about the political situation during the debate on Channel 9 last night, together with 10 first-time MP candidates from 10 parties,” Ms Orawan wrote.

The students didn’t know the content of the questions beforehand. They only received lunch boxes and transport to join the programme, according to the veteran journalist.

“But the 100 voices of these first-time voters are scaring the powers-that-be, so much so that they view it as a pretext to attack the government, even though they are the issues all Thais have the right to express opinions on as they affect our future,” she wrote.

“As a host and the person who came up with this format for the debate, I respectfully accept the decision of MCOT’s board and executives.

“But as a member of the media for almost 30 years, I won’t accept being branded 'impartial' in performing duties and would like to thank the audiences for the positive feedback on the debate last night.”

While the post was no longer present on her Facebook on Saturday, a screenshot of it has gone viral online.

The Thai Broadcast Journalists Association issued a statement on Saturday saying Ms Orawan’s actions were not sufficient proof that she tried to create a pretext for an attack on the government. It urged the MCOT board to reconsider the order.

According to Stock Exchange of Thailand data, Gen Chatchalerm Chalermsuk, a member of the junta-appointed National Legislative Assembly, is the chairman of the MCOT board. The other 12 directors are civilians.

Myanmar’s ruling junta has moved to restrict political parties from meeting foreigners or international organisations ahead of an election expected next year.

Police have arrested six people accused of being part of an online gambling network and seized cash and other assets worth about 46 million baht.

JAKARTA: Indonesian Defence Minister Prabowo Subianto has declared his entry into the country’s presidential race in 2024, his third bid for the top job in the country.