Suriyasai Katasila and other jailed leaders of the former People's Alliance for Democracy, arrive at the Criminal Court in Bangkok on Monday to hear the judgement on the yellow-shirt protest outside parliament in Oct 5-7, 2008. (Photo by Patipat Janthong)

The Criminal Court on Monday acquitted 21 leaders of the former yellow-shirt People's Alliance for Democracy of violently laying siege to parliament during a protest against the Somchai Wongsawat government in 2008, ruling it was a peaceful rally.

Public prosecutors filed the case in 2012, accusing the PAD's leaders of instigating a violent rally on Oct 5-7, 2008 to prevent the Somchai government entering the parliament to deliver its policy statement.

The court ruled that the leaders of the rally briefed followers on the extent of then-government's corruption and mentioned attempts to amend the constitution in favour of former prime minister Thaksin Shinawatra,  who was facing corruption investigations.

The court ruled it was a peaceful rally supported by the 2007 constitution, and that the blocking of traffic was a natural effect of a demonstration.

The violence on the morning of Oct 7 occurred when police fired tear gas at demonstrators to clear the way for Mr Somchai to enter the parliament. The demonstrators responded with force, but they were not acting at the behest of the PAD leaders, who were not at the scene.

Two people were killed and 381 others injured in the clash. In 2017, the Supreme Court acquitted Mr Somchai and other executives of any wrongdoing in the clash with PAD demonstrators. 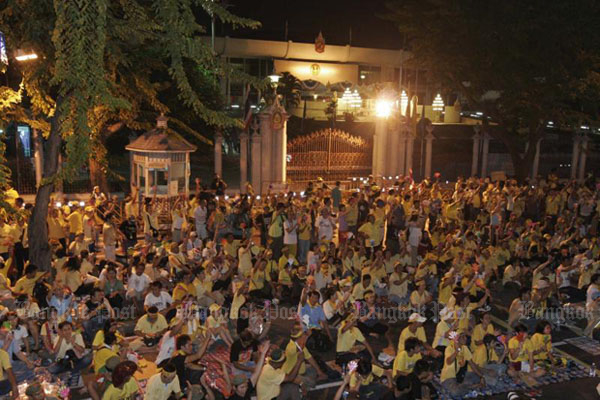 About 5,000 People’s Alliance for Democracy supporters move out of Government House and rally in front of the parliament building on Oct 6, 2008. (File photo)