He said even though the controversial poll was described as an "internal" affair, it could spark public criticism as being biased and he has instructed the Chiang Mai provincial police office to end the survey immediately.

He said no investigation was ordered into the controversy and he verbally reprimanded the Chiang Mai police chief over the opinion poll. However, it was not necessary to issue a written order on the matter, he said.

"I think a reprimand is enough to deter other police units from conducting such opinion polls," he said.

Pol Gen Srivara, who is in charge of the Royal Thai Police's security and legal issues related to the March 24 election, said he would consult the Election Commission over the police poll to see if it has violated the law on elections of MPs.

However, he said he believed the Chiang Mai police's act was not a criminal offence because the survey in question did not mislead the public or sway their voting decisions.

Section 72 of the laws governing the election of MPs bars opinion polls that mislead the public or influence their decisions while Section 157 prohibits the release of findings in the seven days leading up to the ballot and says violators are subject to a jail sentence of up to three months and/or a fine of 6,000 baht.

Pol Gen Srivara emphasised that police officers at all levels were required to maintain political impartiality and not to get involved in politics or with politicians. 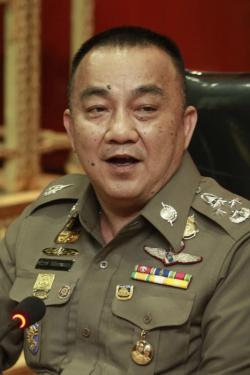 The controversial poll came to the public's attention on Monday when members of a Line app group called "191Chiangmai" were asked their opinions about the upcoming general election by the Chiang Mai provincial police.

The respondents were also asked to pick three issues they wanted the new government to address and to list three qualifications they believed the prime minister should possess.

It was reported there are about 39,000 members in the group.