KHON KAEN: After failing to bring Thaksin Shinawatra home, red-shirt supporters are being told to use their votes to send Prime Minister Prayut Chan-o-cha back home instead.

United Front for Democracy against Dictatorship (UDD) leader Jatuporn Prompan on Wednesday launched a "send Prayut home" campaign, calling on followers to vote for the Peua Chat Party in the March 24 general election.

"So far we have not achieved that. UDD members now have to exercise their power again in an operation to send Prayut home," he told 3,000 members and supporters of Puea Chat in Chum Phae district.

"The easiest way to do that is to go out to vote for Puea Chat candidates on March 17 if voting in advance and on March 24, election day," he added.

Mr Jatuporn is the chief campaigner for Puea Chart, an offshoot party of Pheu Thai backed by Thaksin. 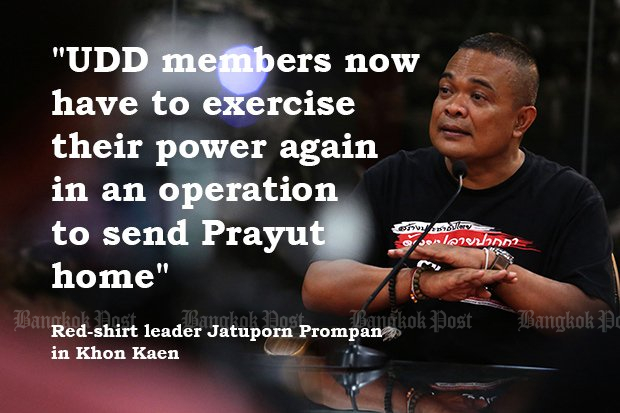 Thaksin fled the country in 2008, ahead of the Supreme Court Criminal Division for Holders of Political Positions' sentencing him in absentia to two years in jail for abuse of authority while prime minister in the sale of state land in the Ratchadaphisek area to his then wife.

Pheu Thai and its predecessors have campaigned vigorously for him to be able to return safely to the country, but the former prime minister remains a fugitive in self-exile.

Gen Prayut has challenged him to return home and fight for justice if he believes he was innocent.