Prayut set for tour of provinces

Prime Minister Prayut Chan-o-cha will visit the areas where the Palang Pracharath Party will hold its election campaign rallies. (Photo by Tawatchai Kemgumnerd)

Prime Minister Prayut Chan-o-cha is scheduled to visit four provinces to follow up on government work over the next two weeks, a move that appears to follow the trail of Palang Pracharath Party (PPRP) election campaign rallies which will be held prior to Gen Prayut's visits.

A political source said the premier is set to descend on provincial areas to follow up government work and meet the people after spending more than a week resting after having treatment for an eye problem.

It is noted that his schedule is set for provinces where the PPRP, which nominated him as its sole prime ministerial candidate, will hold major election rallies.

The prime minister said earlier he must tread carefully and might have to adjust his methods or approaches as a prime ministerial candidate.

According to his schedule, he will visit Khon Kaen and Nakhon Ratchasima to inspect transport projects on Wednesday. These events come three days after the PPRP holds rallies to drum up support in the two northeastern provinces.

On that morning, Gen Prayut will preside over the opening of the new Khon Kaen railway station and follow up on the development of the double-track railway project between Thanon Jira in Nakhon Ratchasima and Khon Kaen. A trial run of the service will also take place that day.

In the afternoon, the prime minister will inspect construction work on a highway linking Bang Pa-in district of Ayutthaya with Nakhon Ratchasima.

On Monday, the PPRP plans to hold a rally in Chiang Rai, while the prime minister will visit the northern province on March 16.

The PPRP is also to stage campaign activities in Nakhon Si Thammarat on Tuesday. with the premier scheduled to visit the southern province on March 20.

The PPRP appears to be wary about the legal consequences of Gen Prayut making an appearance at these rallies. What Gen Prayut could say at the rallies could risk flouting the election law. 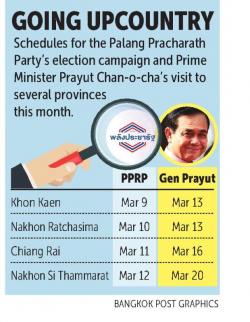 He is also facing a legal petition over whether he is a state official, a position that should prohibit him from accepting a prime ministerial candidacy.

Referring to campaigning ahead of the March 24 election, PPRP leader Uttama Savanayana said the party needs to review its plans

Regarding the run-up to the poll, the party will express its readiness to run the country with a presentation of policies and individuals, Mr Uttama said. "I believe these policies will answer the people's needs since they are pragmatic and can be undertaken right away," the party leader said.

He remained coy about how Gen Prayut would be brought in to help the party with the election campaign, saying there has been no decision regarding the matter.

Responding to scepticism about his trips which appear to target the very provinces where the PPRP is holding election rallies, Mr Uttama said Gen Prayut's visits have nothing to do with the party.

The former industry minister said he did not think Gen Prayut's refusal to take part in political debates or address crowds would have an impact on the party since various other methods of electioneering can be pursued.

However, Mr Uttama stressed there would be a surprise in store from the party just before the poll. "Please wait and see," he said.

Yuttaporn Issarachai, a political scientist from Sukhothai Thammathirat Open University, said the premier's visits to the provinces cannot be deemed as campaigning, but his actions will undeniably have an influence on the popularity of the PPRP, thereby undermining its legitimacy in the event the pro-junta party wins the election.

The PPRP is also facing a petition in which the Election Commission has been asked to look into irregularities regarding the party's lavish banquet held to raise funds in December.