Anger as PPRP let off hook

Critics say EC did not probe all 'offences'

The Dec 19 banquet thrown by Palang Pracharath Party (PPRP) at Impact Muang Thong had a cost of 3 million baht (minimum) for each Chinese table. (Photos by Patipat Janthong)

The Election Commission (EC) has come under fire after it cleared the pro-regime Palang Pracharath Party (PPRP) on one count of alleged wrongdoing which might have led to its dissolution in connection with the party's fundraising banquet in December.

There are, however, other issues related to the banquet to be investigated.

EC secretary-general Jarungvith Phumma, in his capacity as party registrar, said Tuesday that as no foreign party was among the 40 juristic entities and 84 individuals who gave donations at the banquet, the party did nothing that would justify its dissolution, he said.

This finding would be forwarded to the EC members later, he said. According to Mr Jarungvith, the EC is duty-bound to make sure donations to political parties must not be given by foreign entities, something which carries a maximum penalty of party dissolution.

There are still other petitions against the PPRP, but this issue was the first to have been examined and concluded, he said. The others, he said, include abuse of authority which was alleged to have been committed by former cabinet ministers who serve as executive members of the PPRP.

"These issues have a lot of details and the investigation is still ongoing," said Mr Jarungvith.

The PPRP held its fund-raising banquet at the Impact convention and exhibition complex at Muang Thong Thani n Nonthaburi province on Dec 19. It was reported the party raised about 650 million baht from the event, where each of the 200 tables cost three million baht. 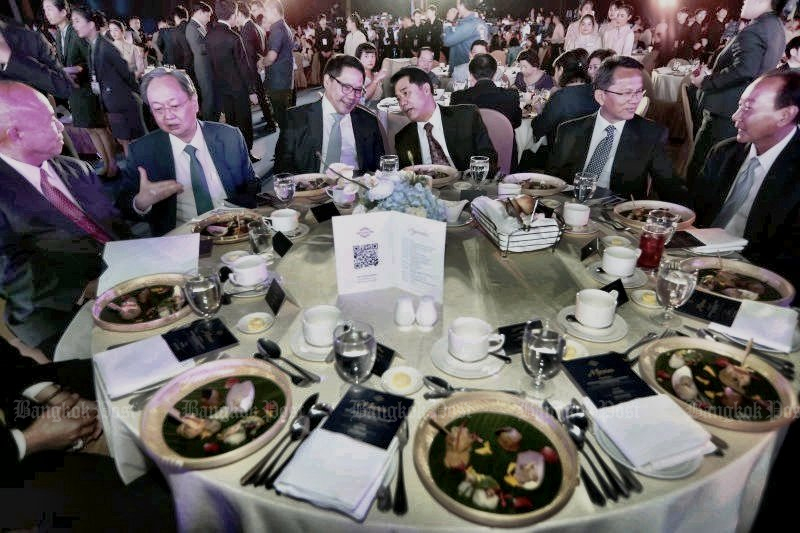 Members of the Palang Pracharath Party attending the costly dinner included party leader Uttama Savanayana, third from left. The banquet raised 600 million baht, although most attendees were paying more for their political influence than for the smoked salmon, prawn ravioli soup and cod braised in soy sauce. (Photos by Patipat Janthong)

He said the EC only investigated alleged offences in connection with Section 74 of the organic law on political parties, which prohibits parties from receiving donations or benefits from foreigners, foreign juristic entities or locally registered entities with a foreign major shareholder.

Mr Srisuwan said his association petitioned the EC to investigate whether civil servants or state agencies gave donations to the party, violating Section 76 of the law. The association also questioned why some juristic entities were still able to donate as their businesses had always run at a loss, he noted.

This could be the subject of wrongdoing in connection with sections 72 and 29 of the act, according to Mr Srisuwan. The former prohibits parties from receiving donations when they are aware that these donations came from illegal means, while the latter bans party outsiders from influencing party affairs.

He said his association had also petitioned the EC to investigate whether state officials, including those from the Bangkok Metropolitan Administration and Tourism Authority of Thailand, had given donations, since both agencies were on the list of banquet participants.

If the PPRP's practices are found to have violated the law, the EC could recommend that the Constitutional Court dissolve the party, he said.