With 11 days to the general election, and only three days until advance voting on March 17, six key parties have vowed to narrow the income gap and curb corruption. 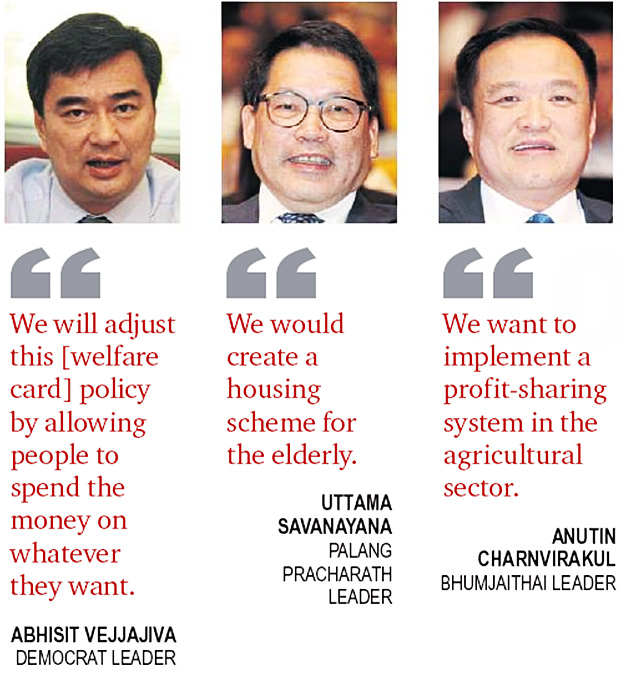 Speaking at a debate held by the Thai Chamber of Commerce and Board of Trade yesterday, representatives from the Democrat, Palang Pracharath (PPRP), Bhumjaithai, Chartpattana, Pheu Thai and Future Forward (FFP) parties vowed to adopt economic policies aimed at reducing inequality if elected.

Mr Abhisit cited state-issued welfare cards as an example. At present they can only be used at Thong Fah (Blue Flag) supermarkets. Critics claim all this has done is draw low-income earners away from other stores.

"If elected, we will adjust this [welfare card] policy by allowing people to spend the money on whatever they want, so more people would benefit," he said, adding that certain income levels should also be guaranteed.

Bhokin Bhalakula, a member of Pheu Thai's strategic committee, said his party would end economic hardship through empowering policies with an eye on farmers, SMEs, exports, tourism and young entrepreneurs. 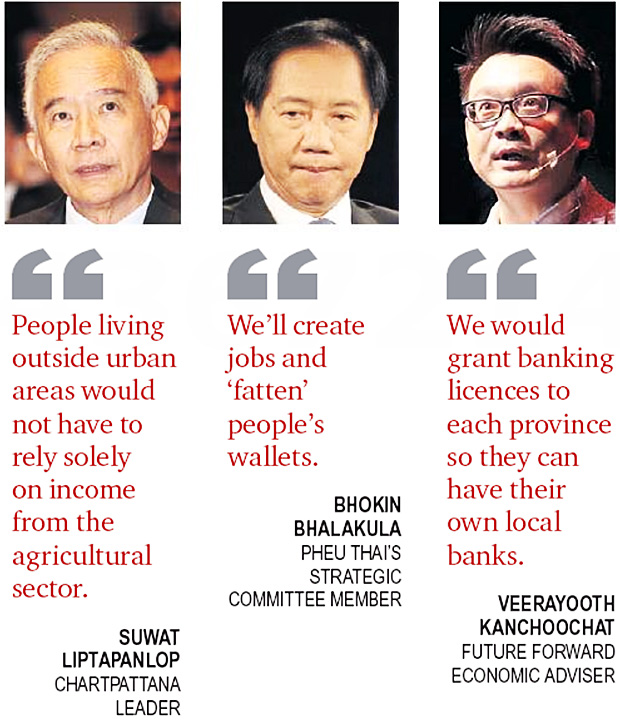 They would in turn be expected to increase purchasing power and drive growth.

Mr Bhokin said Pheu Thai's policies would narrow the gap between three types of medical welfare funds, and give schools more freedom to manage and design their own curricula.

"We are confident we have what it takes to end economic hardship quickly. We'll create jobs and 'fatten' people's wallets," Mr Bhokin said.

PPRP leader Uttama Savanayana said the welfare card project for the poor and the one million-unit housing project would be continued. Moreover, beneficiaries would be extended to, potentially, the elderly, people with disabilities, pregnant women and low-wage workers.

"The grey [elderly] population in Thailand is growing fast so we would create a housing scheme for the elderly," he said.

Veerayooth Kanchoochat, economic adviser to the FFP, said his party saw a need to put an end to industrial monopolies and increase access to financial resources.

"We would grant banking licences to each province so they can have their own local banks as alternative sources of funds to the big banks based in Bangkok," he said.

Bhumjaithai Party leader Anutin Charnvirakul said his party wanted to use the profit-sharing system between sugar millers and cane growers as a role model to help farmers. The party also views marijuana as a potential cash crop.

"We want to implement a profit-sharing system in the agricultural sector, so the small fish can survive and work with the big fish," he said.

Suwat Liptapanlop, chief adviser of the Chartpattana Party, said his party would promote Thailand as a tourism hub in Asean and draw more visitors to secondary cities to reduce inequality.

"People living outside urban areas would not have to rely solely on income from the agricultural sector, but could also earn from the service sector in their own home," he said.