Prohibitions while voting. Violators are subject to ranges of penalties including up to 10 years in prison, up to a 200,000 baht fine and a revocation of the right to vote for up to 20 years.

A high voter turnout is expected on Sunday when millions of eligible voters head to the polls for the country's first election since the 2014 coup, as the Election Commission dismisses claims of technical fraud.

Election authorities in several provinces including Bangkok have predicted an 80% turnout due to increased public interest, and the voter turnout for the March 17 advance vote which saw 87% of 2.6 million registered voters cast their ballots.

Train and bus terminals in Bangkok were yesterday crowded with travellers who were apparently returning to their home provinces to vote.

Based on reports from Transport Co which operates inter-provincial bus services, about 120,000 people left Mor Chit 2 bus terminal on Friday and the agency on Saturday prepared its fleet to accommodate another 120,000 passengers.

In the southern province of Songkhla, a large number of people on Saturday flocked to renew their identification cards at Damrongdhama service centres to make sure they have valid ID cards for the big day.

Over 51 million people are eligible to vote on Sunday including 7.3 million first-time voters. Polling stations will be open from 8am to 5pm and a vote count will be conducted at polling stations after the polls close.

"The result of this election will indicate the direction of [Thai] democracy," he said, adding that rapid teams are ready to spot election law violations, especially vote buying. Some instances of vote buying have already been reported.

Pol Col Jarungvith Phumma, secretary-general of the EC, gave assurances on Saturday the 2,000 election officials and almost 800,000 staff working at polling stations across the country are 100% ready for the general election. 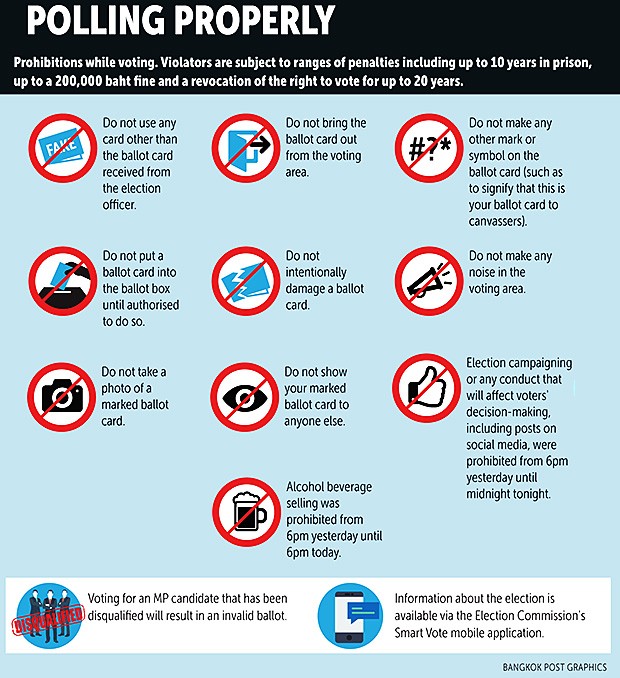 Election officials at all constituencies were given voting-related equipment and materials including ballot papers, ballot boxes and pens to mark the ballots with Sunday.

Dismissing rumours of a "disappearing ink trick" as untrue, Pol Col Jarungvith said the EC's Office has instructed election officials and staff at polling stations to examine and test the pens.

The instruction is in response to a message circulated in social media that says pens with a special kind of ink that disappears within 15 minutes will be used at polling stations. EC deputy secretary-general Nat Laosisawakul said on Saturday the disappearing ink rumour is a hoax.

Pol Col Jarungvith also urged the public to help act as the eyes and ears of the EC and keep the general election transparent.

The EC has set up 35 sub-committees comprising 175 members to review election-related complaints.

Political parties and election candidates on Saturday spent the last day asking for support before the campaigning ended at 6pm in line with the election law, which also bans liquor sales until 6pm on Sunday.

Provincial election officials on Saturday assured they are fully prepared for Sunday's voting and sent rapid teams to monitor activities and prevent "howling night" -- a reference to alleged vote buying on the eve of the election when the sight of vote-buyers in the neighbourhood sets off dogs howling.

He said the provincial election office has informed the EC of alleged vote buying in Constituency 10 and officials are investigating the allegations.

Mr Sirichai also expressed concerns about weather conditions after a warning about freak storms in several provinces in the upper part of the country between March 23 and 27.

He said preparations have been made in case of rain but even so it may cause inconveniences to voters in some areas.