Warong Dechgitvigrom of the Democrat Party suffered a humiliating loss to newcomer Padipat Santipada of the Future Forward Party in Phitsanulok on Sunday. (Photo by Chinnawat Singha)

Voters turned against quite a few prominent former members of parliament on Sunday, instead voting for candidates of the Palang Pracharath (PPRP) or Future Forward (FFP) parties.

Unofficial results showed unexpected defeats in many constituencies for candidates running under the Democrat or Pheu Thai banners.

The most lopsided loss was in Phitsanulok, where Democrat candidate Warong Dechgitvigrom trailed newcomer Padipat Santipada of FFP by more than 5,000 votes.

Pheu Thai was in the same boat in Bangkok's constituency 28, with Watana Muangsook well behind the PPRP candidate, also by about 5,000 votes.

Mr Watana is well known for his anti-coup stance, and is one of Pheu Thai's key figures.

"The ship named Democrat under his captaincy made a huge mistake," he wrote, without mentioning Mr Abhisit by name.

"The ship was poorly guided. We did not fight the old enemy and instead opened a new front, fighting a new enemy," he said.

Dr Warong appeared to refer to the action of his former boss in announcing, before election day, his personal opposition to Prime Minister Prayut Chan-o-cha holding on to power. Mr Abhisit resigned on Sunday after learning of the party's resounding losses. (continues below) 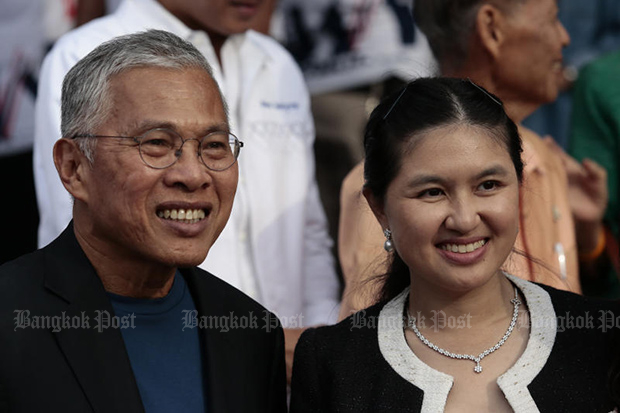 Watana Muangsook and Sunisa Divakorndamrong of Pheu Thai both lost their bids for seats in Bangkok. (Photo by Patipat Janthong)

Mr Wattana's Facbook account has remained quiet. His last message was on Saturday, calling on voters to exercise their power and put an end to the junta's regime.

Mr Atthawit and Mr Ekkanat joined Suthep Thaugsuban in the street rallies against Ms Yingluck and Pheu Thai under the now defunct People's Democrat Reform Committee. Mr Apimongkol is a son of MR Chatumongol, a former Bank of Thailand governor and now leader of the Action Coalition for Thailand Party supported by Mr Suthep.

"Although I lost at the election, my heart is still 100%," Lt Sunisa posted on her Facebook account, telling her supporters that she will not bow out of politics. "Thank you for all the votes for Jeab and the Pheu Thai Party," she added, using her nickname.

Another veteran politician to bite the dust was five-times Trat MP Theera Salakphet of the Democrats, who ended his run in second place, losing to Sakdinai Numnoo of FFP.

Mr Theera called the winner to congratulate him on Sunday night.