While Pheu Thai and Palang Pracharath (PPRP) jostle hard to try and gain the upper hand in forming a coalition government, the Bhumjaithai Party is emerging as a potential "kingmaker" in the post-election power struggle -- the result of which is still too early to call.

As of late Monday afternoon, the Election Commission (EC) announced that the unofficial tally of seats bagged by Pheu Thai stood at 137, compared to the PPRP's 97.

Although the PPRP has come second to Pheu Thai when it comes to the total number of constituency seats won, the PPRP has more popular support with 7.9 million votes to Pheu Thai's 7.4 million. As such, the PPRP is expected to bag 116 seats in total -- 19 of which will be seats won under the party-list system.

Because of this, Pheu Thai needs the support of other parties for it to achieve the simple majority it needs to form a coalition government. 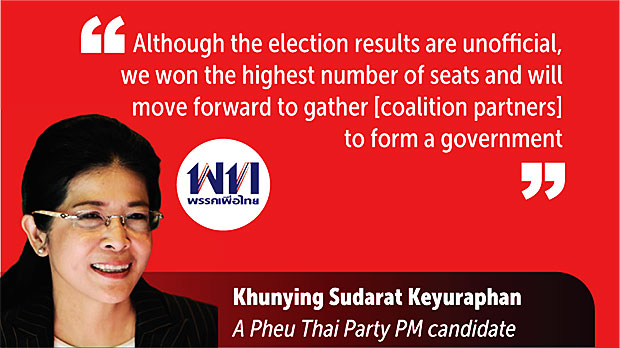 So far, only the Future Forward Party (FFP) has explicitly said that it shares Pheu Thai's aim to oust the regime.

However, with preliminary results indicating that the FFP would only have 80 seats under its belt -- consisting of 29 constituency seats and 51 party-list seats -- Pheu Thai cannot count its chickens yet, and needs to court other parties to reach its target.

The Bhumjaithai Party, which is expected to win 51 seats, consisting of 39 constituency seats and an estimated 12 party-list seats, is quickly turning into a "kingmaker", as the party has yet to commit itself to supporting either Pheu Thai or the PPRP.

Recently, a Pheu Thai source said that key party figures were willing to negotiate and make compromises with other parties, if they agree to put their weight behind Pheu Thai's bid to lead a coalition government.

Two surprising concessions that the source revealed, was that the party was willing to abandon its bid for the premiership and would agree to cede control over "A-list" ministries in exchange for their support so their bloc can secure the more than 300 seats in the House needed to prevent Prime Minister Prayut Chan-o-cha from returning to power. 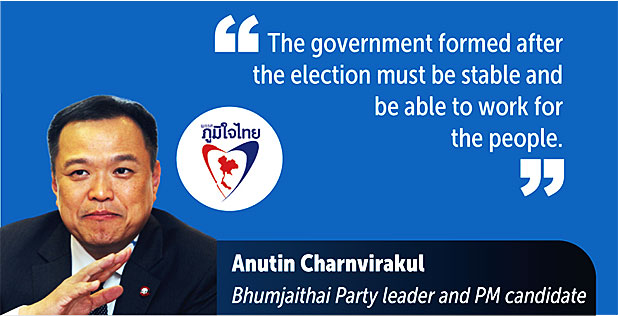 Pheu Thai key figures, including Khunying Sudarat Keyuraphan, the party's prime ministerial candidate, have said that based on the unofficial results, Pheu Thai should be given the right to form a government.

Khunying Sudarat said the party will begin to approach other parties who also oppose extending the regime's rule.

Pheu Thai secretary-general Phumtham Wechayachai concurred with Khunying Sudarat, before adding that the 250 appointed senators must respect the will of the people.

Similarly, PPRP leader Uttama Savanayana said on Monday that the PPRP will also begin approaching other parties for coalition talks, before adding that he is confident that its bid will be successful.

He said that by virtue of winning 7.9 million votes, the party has won a mandate and the legitimacy to set up a government. 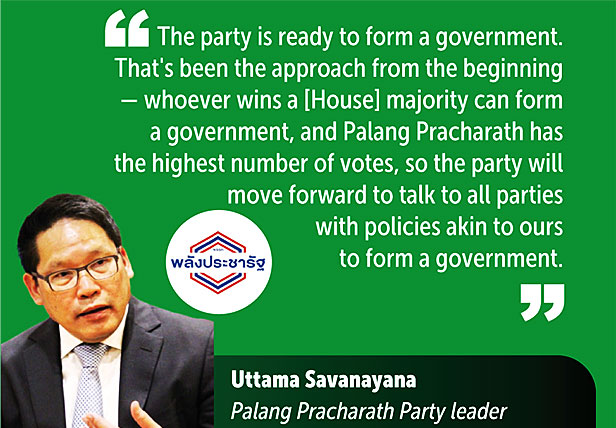 PPRP secretary-general Sontirat Sontijirawong, agreed with Mr Uttama and said that since the PPRP won the popular vote, it should be allowed to form a government, before also adding that the PPRP has already begun talking to other parties about forming a coalition government.

In this election, the votes cast for losing constituency candidates are used to calculate the number of party-list seats for a party, rather than being thrown away under the old first-past-the-post system.

Under the new system, while candidates who win the most votes in each constituency automatically become members of parliament, parties who backed unsuccessful candidates under the constituency system still have the chance of seats in parliament under the party-list system.

The Action Coalition for Thailand, formed by former street protest leader Suthep Thaugsuban, has openly backed Gen Prayut's bid to stay in power, but his party only has five seats in the bag. 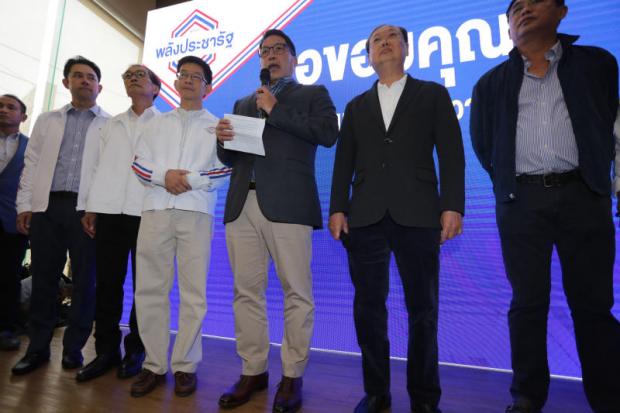 Democrat Party leader Abhisit Vejjajiva said after announcing his resignation on Sunday night that the future direction of the party will be decided by the executive board.

Mr Abhisit has made it clear on several occasions that the Democrats will never join hands with Pheu Thai, and that the party will not form a coalition with parties that have no experience in running an "honest democracy".

However, Thaworn Senneam, a Democrat candidate for Songkhla, on Monday hinted at the possibility that the party may join the PPRP-led coalition.

He said that the possibility is now there as Gen Prayut followed the democratic process in Sunday's election, which is in line with the Democrat's manifesto, and that the party will hold a meeting "soon" to decide its position regarding the next government.