Key representatives of Pheu Thai and its allied parties at their press conference to announce their formation of a prospective coalition government, in Bangkok on Wednesday. (Photo by Somchai Poomlard)

The Pheu Thai Party on Wednesday announced the formation of a seven-party coalition government with 255 MPs, vowing to stop the National Council for Peace and Order returning to power.

Khunying Sudarat Keyuraphan, a candidate for prime minister, said Pheu Thai and its six allies stood firm in their determination to prevent Gen Prayut Chan-o-cha remaining in power. The pro-democracy parties had the mandate to form a coalition government, she stressed

Also present at the news announcement at the Lancaster Hotel, opposite Pheu Thai Party headquarters on Phetchaburi Road, were representatives of the Future Forward, Thai Liberal (Seri Ruam Thai), Prachachat, Puea Chart and Thai People Power parties, not any from the New Economics Party.

Only the leaders of six parties were present to sign the agreement.

Khunying Sudarat admitted the March 24 general election was an uphill battle for the pro-democracy parties, with alleged misuse of state mechanisms, vote buying and irregularities in vote counting.

She said they were still actively seeking more allies.

Future Forward leader Thanathorn Juangroongruangkit echoed Khunying Sudarat on their intention to remove the NCPO from power. He also said any attempt to form a minority government in the House would lead only to chaos and deadlock.

He also urged the Election Commission (EC) to ensure transparency in electoral results.

Prachachat Party leader Wan Muhamad Nor Matha said the formation of a government with a minority of seats in the House would be in disrespect of the people's voice. It would not be stable and would affect the national economy.

He said there was no sound reason for the EC to delay its announcement of electoral results, only an attempt to side with a particular party.

New Economics Party leader Mingkwan Sangsuwan did not show up at the news conference.

However, Pheu Thai secretary-general Phumtham Wechayachai said the New Economics Party was in the coalition. Mr Mingkwan had confirmed its participation to him on Tuesday night.

Mr Mingkwan posted a message on his Facebook page around 7pm on Tuesday: “I am a person who keeps my word and political stand.’’

The party has six seats by unofficial count. 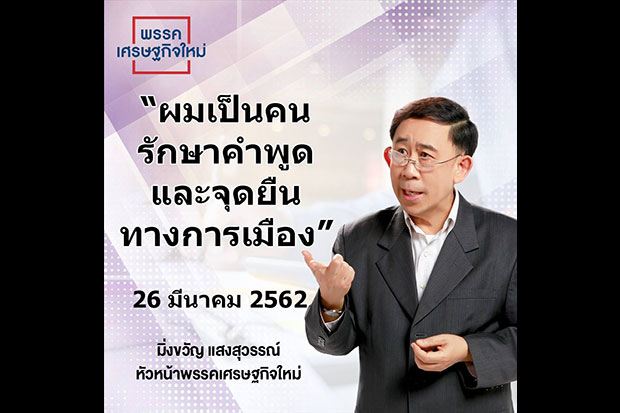 New Economics Party leader Mingkwan Sangsuwan posted this message on his Facebook page around 7pm on March 26,  “I am a person who keeps my word and political stand.’’ (Photo from @MINGKWANSANGSUWAN9 Facebook page)