Pheu Thai prime ministerial candidate Khunying Sudarat Keyuraphan leads executives from six other parties to form a 'democratic front' against any move by the incumbent regime to extend its grip on power. Somchai Poomlard

It is premature for the Pheu Thai-led alliance to claim it can successfully form a government despite it saying it can secure 255 MPs out of 500.

Another key hindrance is that it needs at least 376 votes out of 750 in parliament to win a prime ministerial vote.

Under the constitution, 250 regime-appointed senators would join 500 MPs to select a prime minister. Accordingly, more than half of them need to be won over to choose a premier.

It is believed the senators will vote in unison for Gen Prayut Chan-o-cha to make a return as prime minister.

The situation would enter deadlock if a Pheu Thai-led alliance formed a government with a slight majority but failed to win the prime ministerial vote.

The alliance rushed to hold a press conference on Wednesday to announce it had secured then backing of 255 MPs even though the Election Commission has yet to announce the number of votes for each party, which is the key element in calculating the number of party-lists MPs.

The EC said on Wednesday it will announce the number of votes for 95% of the count tomorrow. 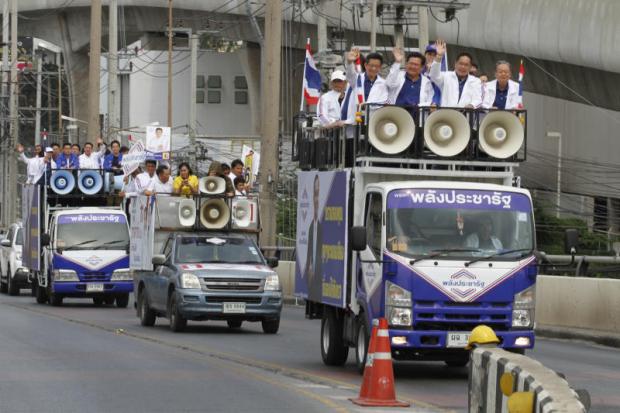 Palang Pracharath Party leader Uttama Savanayana, second right, leads party members in a caravan to thank the people of Bangkok for their votes on Sunday. The party's jaunt through the capital took place on Wednesday morning. Pornprom Satrabhaya

The alliance consists of 137 MPs from Pheu Thai, 88 from the Future Forward Party (FFP), 12 from Seri Ruam Thai, seven from the New Economics Party, seven from Prachachat, five from Puea Chat and one from the Thai People Power Party.

Their leaders, except New Economics Party leader Mingkwan Sangsuwan, agreed to form a government together. Mr Mingkwan, who was not present when the other party leaders met, sparked speculation that the alliance may collapse. Still, in the evening Mr Mingkwan came out to confirm that his party would join the alliance.

Pheu Thai's chief competitor, the Palang Pracharath Party (PPRP), is tipped to gain 119 MPs, and is also gearing up its efforts to court other parties to form a coalition government.

The Democrat Party, which is expected to have 52 MPs and the Bhumjaithai Party with 51, are believed to be the key parties that will join the PPRP despite the fact that they have yet to announce this.

Pheu Thai acknowledges the situation. The party demanded its potential MPs sign a resignation letter in advance to guarantee there would be no betrayals.

The Pheu Thai-led group is also trying to court the Bhumjaithai Party. Its leader Anutin Charnvirakul said his party will not announce a decision until the EC announces 100% of the count, scheduled for May 9.

A highly placed source in the Democrats said the party is likely to enter the opposition ranks and would not align itself with any factions. This would put an end to the possibility of the Pheu Thai-led alliance being able to win the Democrats over to its camp.

Another key challenge for the Pheu Thai faction lies with the EC's endorsement of the poll results.

The remaining 5% of the vote count has yet to be revealed and it is unknown whether this will have any major bearing on the seats currently held by parties. 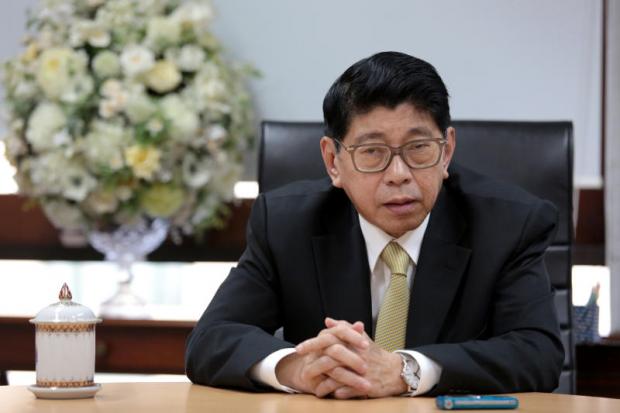 Meanwhile, Deputy Prime Minister Wissanu Krea-ngam said the official election results would be announced on May 9 and the list of senators would be forwarded for royal endorsement three days later.

The new parliament is likely to call a meeting to choose a prime minister between late May and early June, he said.

He said the formation of a government depends on negotiations. "Someone may vote for a prime minister, but when they are disappointed on finding out which position they will get, they may decide to switch sides," Mr Wissanu said.

Referring to the Pheu Thai-led alliance's push to form a government at its news conference on Wednesday, Mr Wissanu said this was a psychological ploy since only 95% of the vote count has been announced.

Future Forward leader Thanathorn Juangroongruangkit said the most appropriate prime ministerial candidate is Pheu Thai's Khunying Sudarat Keyuraphan as she is a key figure in the party that won the most MPs.

"Efforts to form a minority government will bring society to a dead end," Mr Thanathorn said.

Ousted premier Thaksin Shinawatra on Wednesday tweeted he was happy for Thailand as the "democratic side" has more than half the MPs.

"I have been outside Thailand for more than 10 years. I would like to ask all sides not to use my name as a political tool anymore," Thaksin said.