Human side of Abhisit
Thailand
Politics

Human side of Abhisit

Then Democrat leader Abhisit Vejjajiva in a cheerful pre-polls moment, during the party's last major campaign rally, at Lan Khon Muang, outside City Hall, on March 22. (Photo by Chanat Katanyu)

Abhisit Vejjajiva is out, but he remains in forever for Democrat Party candidate Rachada Dhnadirek.

The former Bangkok MP for the Democrats commended Mr Abhisit on her Facebook account for his sincerity and attention to members while guiding the party.

She recalled the day 11 years ago when she told Mr Abhisit of her intention to enter politics under the party's banner.

"The party is ready to support you but we don't have money. Can you take care of yourself?" he told her.

"If you want to contest a constituency with the chance of losing, I would not do it. I do not want you to get hurt."

What Mr Abhisit said showed his sincerity, she added.

The former Mahidol lecturer was finally fielded in constituency 12 - covering Bangkok Noi, Taling Chan, Bang Phlad and Thawi Watthana districts - in 2007 and entered parliament as an MP for the first time. She returned to parliament again in the 2011 general election.

She praised the former party leader for his attention to party members, citing an occasion when she was reluctantly kept waiting for her turn to speak in a House debate, as the clock ticked past midnight. After she finally had her turn and then sat down, there was an SMS from him reading: "Good job."

On another occasion, while in opposition, she was overwhelmed by cabinet members countering her argument on the rice-pledging scheme. Mr Abhisit turned to her and asked whether she needed help. (continues below) 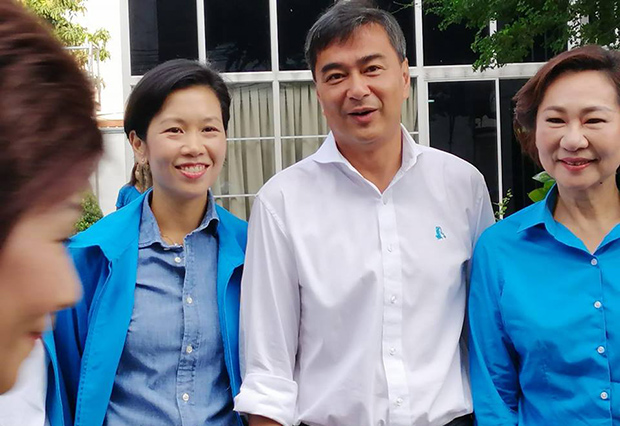 Ms Rachada said Mr Abhisit worked hard and never stopped seeking new knowledge. "There is a huge pile of books in his working office, and also sweets," she wrote.

Mr Abhisit resigned as the Democrat leader on Sunday night as results came in, taking responsibility for the party's poor showing in the polls - including the shocking sweep of Bangkok constituencies by the Palang Pracharath, Future Forward and Pheu Thai parties. The city was previously a Democrat stronghold.

"I apologise to my fellow members who share our ideals, both former MPs and newcomers, for their failure to enter the House. I must take responsibility. Therefore, I resign as party leader, effective now," he  said.