The LGBT advocate set to be an MP
Thailand
Politics

The LGBT advocate set to be an MP

Tanwarin Sukkhapisit, a party-list MP-elect from the Future Forward Party, aims to amend the Civil and Commercial Code for same-sex marriage and the Film and Video Act for freedom of expression. (Photo by Somchai Poomlard)

She has been unwavering in her journey from filmmaking to politics and her campaign for gender equality in Thailand.

At 45, Ms Tanwarin is known for her contribution to the Thai entertainment industry. However, her venture into politics became an overnight sensation.

"I am the first transgender person to register an MP application and publicly declare that I will be the first katoey MP in the House. After I came out of the closet, other transgender candidates hit the campaign trail," the former president of the Thai Film Directors Association told the Bangkok Post.

Amendments to the Civil and Commercial Code, Section 1448, for same-sex marriage and the Film and Video Act for freedom of expression are among her gender equality political goals, not just for the LGBT community but everyone in society, something she never experienced when she was young. 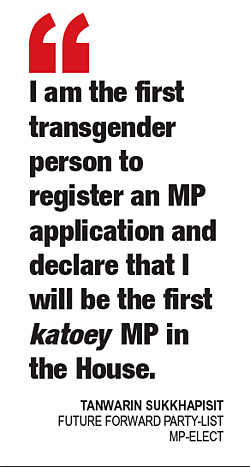 Ms Tanwarin remembered that she did not want to be a man, but being a woman seemed to be the only option available. "I played with dolls, put on a wig, and cross-dressed to fulfil my fantasy of becoming a girl," she said.

At that time, Ms Tanwarin said strong bias against transgender people meant she suffered years of mistreatment from her classmates. "Male students often bullied me for no reason. They slapped my head and set fire to my vegetable plot. They did this unashamedly because I was born a katoey," she said.

According to Ms Tanwarin, transgender people were perceived as clowns in Thai society. Without any inspiring role models to follow, they were under pressure and had to double their effort in school and life to gain recognition for their capabilities.

"When I was in Mathayom 5, I asked my teacher to produce a play called Wanthong. I was a director, playwright, and a leading actress. I wore a wig with long hair and a pink breast-cloth. I won plaudits and a provincial award for the play," she said.

Like many transgender people from her generation, Ms Tanwarin did not tell her parents about her gender identity although she believed that they knew from their neighbours and her classmates. She remained tight-lipped until her mother visited the school.

"The teacher approached my mum and told her about my award-winning performance. She didn't know about it and asked me to show photos. After she looked at them, she said I should dress more beautifully. It was encouraging. It got the worrying off my chest," she explained.

"It was a turning point in my life. Without anything to hold me back, I followed my passion for filmmaking," she said proudly.

However, Ms Tanwarin's journey into the entertainment industry was not a bed of roses. She produced many plays during her studies at Khon Kaen University, but it was another thing when she graduated and started looking for a job.

"I headed to Bangkok and auditioned for Exact's musical theatre, but I did not sail through the final round because I could not sing along with the piano. I returned home to Nakhon Ratchasima empty-handed and crestfallen," she said.

Ms Tanwarin became a teacher but continued to produce local plays until she eventually managed to feature in soap operas, such as Chai Mai Jing Ying Tae (1998) and Yod Ya Yee (1999). However, she felt uncomfortable because transgender roles were always stereotyped as boisterous clowns.

"One actress said I should not take it seriously because a katoey character is not important," she said.

However, Ms Tanwarin wanted to put the real lives of transgender people on screen, so she entered short film competitions to tell their stories. In Pleuak or "Deep Inside" (2002), Ms Tanwarin's character leads a double life as a day-time teacher and night-time transvestite.

"I was a runner-up and represented Thailand in France's film festival. Afterwards, I quit teaching and became a film director advocating gender diversity," she said.

Ms Tanwarin produced the film Malang Nai Suan Lang Baan or "Insects in the Backyard" (2010), which features a middle-aged transvestite caretaker of his younger brother and sister, to educate the public, but the Ministry of Culture's National Film Board banned the movie on the grounds of moral indecency.

"At first, I was angry because people condemned my film as being immoral and pornographic," she said. "However, I gradually understood that they didn't understand gender diversity because our society didn't promote equality among human beings."

Ms Tanwarin took seven years to win the legal battle and have the ban lifted. Meanwhile, she produced another transgender film Mai Dai Khor Hai Ma Rak or "It Gets Better" (2012), which earned her recognition at the Suphannahong National Film Awards. "We can live together even if we are different. You don't have to love me, but should understand and respect me," she said.

According to Ms Tanwarin, politics and art are inseparable and cultural content can instil certain beliefs and ideologies into people. "While some soap operas continue to propagate patriarchy, textbooks also cause misunderstanding about gender diversity, defining transgender people as sexual deviants," she complained.

Besides being the first transgender MP, Ms Tanwarin is looking forward to heading the Ministry of Culture to advocate LGBT issues among others. "I would like to promote gender diversity and strengthen the production of cultural content in Thailand."

With the FFP's focus on equality and diversity, Ms Tanwarin said Thai politics has seen newcomers in terms of class, gender and ethnicity. "Historically speaking, the House is exclusively for male politicians and businessmen who seek personal gain," she said.

Ms Tanwarin claimed that her party made history in politics by opening doors to capable people regardless of their identities. "We are rookies in politics, but we have experience and achievements in our careers and hope to put them to use. We will speak for ordinary people to create an equal society," she said.