The Thai-Japan Youth Centre in Bangkok’s Din Daeng district is packed with election officials, MP candidates and their supporters as political parties registered their candidates in February. (File photo)

A drafter of the organic law on the election of MPs insisted on Tuesday that small parties which received fewer than 71,000 votes can be awarded party-list seats under the proportional representation system.

Jade Donavanik, who sat on the Constitution Drafting Committee (CDC), said the new electoral system differs from previous polls in that it does not impose a minimum vote requirement.

He also expressed concern about the growing confusion over the calculation method amid criticism from major parties that a dozen small parties capturing between 30,000-50,000 votes will be awarded party-list seats. 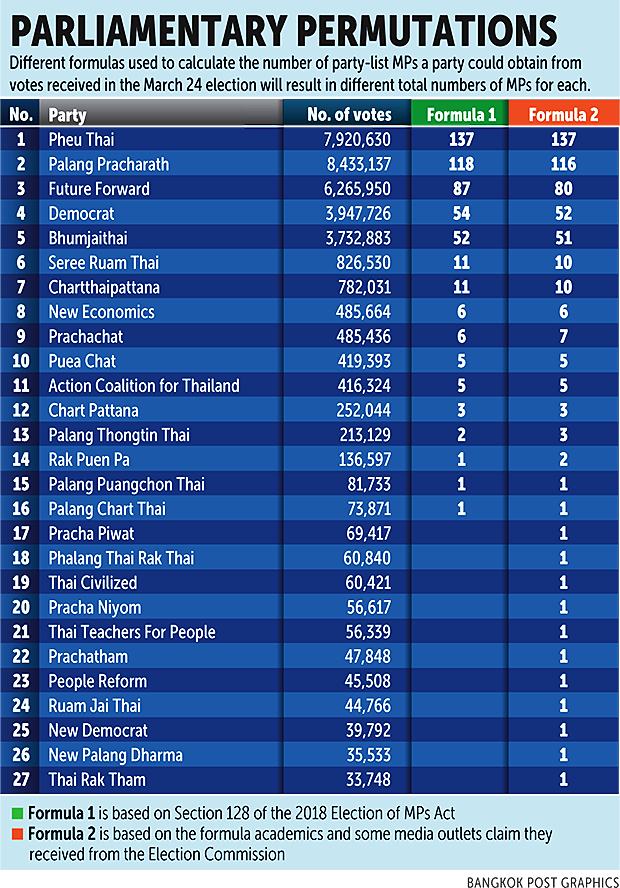 According to Mr Jade, in the case of overhang seats, the number of additional seats will be taken from the other parties' proportional entitlement, meaning some parties will get fewer party-list seats.

Representatives from 12 small parties which say they are eligible for 13 House seats between them on Tuesday lashed out at the Pheu Thai Party for suggesting that the votes cast for them be disregarded.

They were referring to Pheu Thai's claim that only 16 political parties should be allocated party-list seats.

"A total of 1,059,700 people cast their votes for the [small] parties. Don't dismiss their votes. And if you look at votes in the constituency system, the winners from major parties didn't receive so many votes anyway," said Mongkolkit Suksintaranont, leader of the Thai Civilised Party.

EC secretary-general Jarungvith Phumma said the EC has yet to discuss how to apply the formulas for the party-list MP calculation and a decision is expected this week.

Chaikasem Nitisiri, one of Pheu Thai's prime ministerial candidates, said on Tuesday it would be unreasonable to calculate House seats for political parties that obtained just a few votes.

Meanwhile, the EC on Tuesday insisted it has operated in a transparent manner. It also said it took five days to announce the initial result which was similar to past elections.

Commissioner Pakorn Mahannop also said the agency is close to completing its probe into the delayed delivery of ballots from New Zealand to determine who is accountable. The EC has ordered them categorised as "uncounted", not spoiled he said.