Future Forward Party secretary-general Piyabutr Saengkanokkul denies charges against him during a meeting with police at the Technology Computer Crime Suppression Division. (Photo by Varuth Hirunyatheb)

Future Forward Party secretary-general Piyabutr Saengkanokkul has denied computer crime and contempt of court charges stemming from a video clip of him reading a party statement on the Constitutional Court's decision to dissolve the Thai Raksa Chart Party in March.

Mr Piyabutr said after hearing the charges at the Technology Crime Suppression Division on Wednesday that he denied the two allegations and expressed confidence in the fairness of the judicial process in handling his case.

He said his statement included no wording that consituted contempt of court. He also insisted that all constitutions allowed the public to monitor and scrutinise the judicial institution and two other pillars -- the administrative and parliamentary institutions.

Police ordered him to submit a written statement confirming his denial by April 25.

Col Burin Thongprapai, a legal officer for the National Council for Peace and Order (NCPO), filed a complaint against Mr Piyabutr for contempt of court and importing information that may undermine national security or public order into a computer system, which is a violation of the Computer Crimes Act.

Mr Piyabutr read a statement on the disbandment of Thai Raksa Chart on March 7. It said efforts have been made over the past 13 years to use the law as a political tool, raising questions about the independence of government bodies as well as the use of the Constitutional Court for political gain, which often leads to further clashes between conflicting parties. 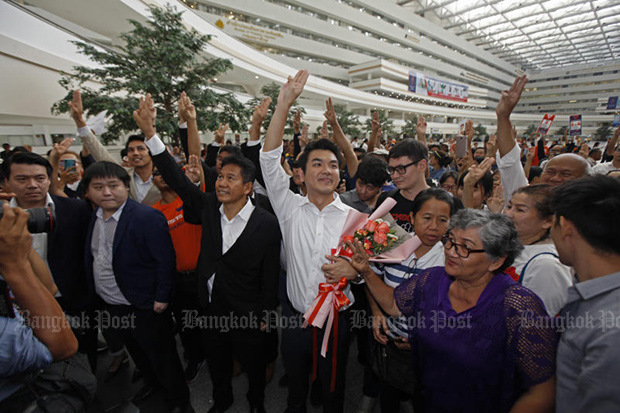 Future Forward Party secretary-general Piyabutr Saengkanokkul (centre) and his supporters flash a three-finger salute after arriving in the Technology Computer Crime Suppression Division on Wednesday to fight charges brought against him by the National Council for Peace and Order. (Photo by Varuth Hirunyatheb)

Angkana Neelapaiji, a member of the National Human Rights Commission, and two representatives of the UN Human Rights office attended the event on Wednesday as observers.

Supporters of Mr Piyabutr and Future Forward flocked to the police office in the Government Complex to show support when he arrived with a lawyer to meet the authorities.

Future Forward emerged as a political surprise in the election on March 24. The one-year-old party won 29 constituencies despite fielding mostly young and new candidates. It is expected to receive about 50 seats under the party-list allocation, although the precise number will vary according to the formula used by the Election Commission.