A new vote will be held in constituency 8 in Chiang Mai after Surapol Kietchaiyakorn of the Pheu Thai Party was stripped of his victory. (Bangkok Post file photo)

The Election Commission (EC) will hold a new election in a Chiang Mai constituency after it ruled the winning Pheu Thai Party candidate violated the election law by giving money to a prominent monk.

The EC order means Surapol Kietchaiyakorn of Pheu Thai will be banned from politics for one year. He was the first successful candidate to be stripped of his seat.

The poll-organising agency on Wednesday resolved to rerun the election in constituency 8 of the northern province after Mr Surapol was disqualified.

The date for the new election has yet to be scheduled. 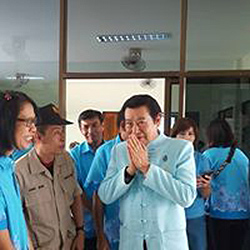 Mr Surapol won the election on March 24 with a comfortable margin of 52,165 votes. Naret Thamrongthippayakul of the Palang Pracharath Party came second with 39,221 votes, followed by Srinual Boonlue of the Future Forward Party with 29,556 votes.

The Pheu Thai candidate cannot contest the seat again as the allegation bars him from politics for one year.

Mr Surapol on Wednesday admitted giving 2,000 baht in cash and a clock to Phra Khruba Sam of Wat Phra That Doi Chao for merit-making during the Thod Phapa ceremony at the temple in Chom Thong district on Feb 14, the day that the electoral laws took effect. But he denied the gifts were aimed at canvassing votes.

"I did it with sincerity," he said and criticised the EC for hastily jumping to conclusions.