Representatives from 11 small parties join hands to show they support Prime Minister Prayut Chan-o-cha’s return as premier and be part of the coalition government being formed by the Palang Pracharath Party (PPRP) during a news conference in Bangkok on Monday. (Photo by Pawat Laopaisarntaksin)

Rumours of infighting within the Palang Pracharath Party (PPRP) gained credence after 13 of its MPs based in the southern region cried foul over speculation that their group might not receive any cabinet seats.

Thawee Surabal, a key member of the group, said it will be unacceptable if they are not represented in the next cabinet while smaller groups which won only 10 House seats each are expected to be allocated one or two spots in the cabinet.

He also claimed the group of 11 small parties which pledged support for the PPRP is likely to be awarded two cabinet places -- one a ministerial post and the other a deputy ministerial post.

"What our group wants is one ministerial post and one deputy slot, in addition to funds for the 14 southern provinces," he said.

He said the group wants Col Suchart Chantarachotikul to represent them in the cabinet as a minister.

Meanwhile, a source in the Sam Mitr (Three Allies) faction said on Tuesday that four key figures in the group, including Somsak Thepsuthin and Suriya Jungrungreangkit, are expected to get cabinet posts if the PPRP succeeds in forming a coalition government.

Mr Somsak is reportedly set for the Agriculture and Cooperatives Ministry or the Natural Resources and Environment Ministry while Mr Suriya may pass in favour of his cousin Pongkawin, who is also a party executive. 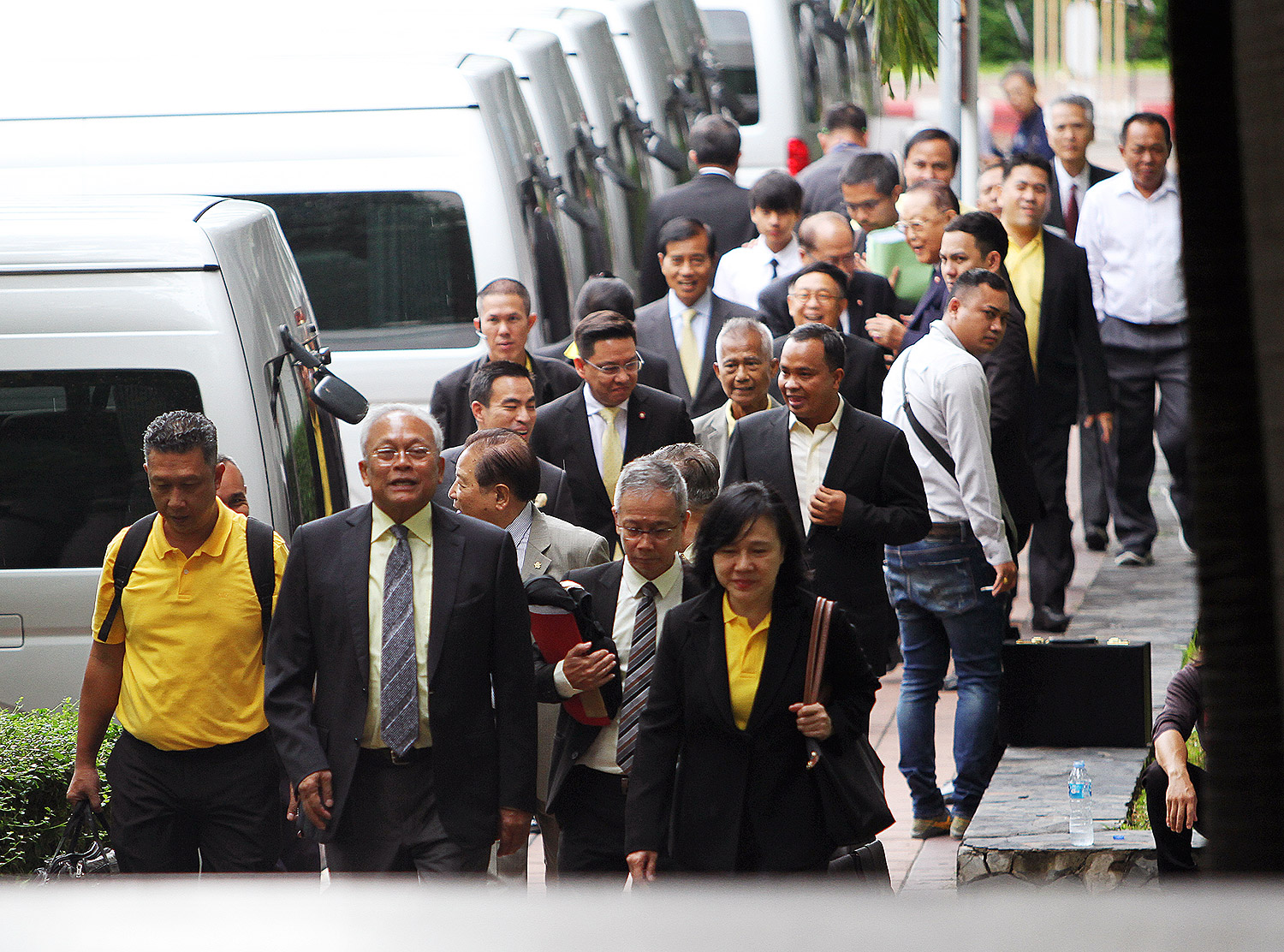 Protest reunion: Former protest leaders of the defunct People’s Democratic Reform Committee, led by the movement’s former leader Suthep Thaugsuban, second from left, arrive at the Criminal Court for a hearing on treason and related charges in connection with the street protests between late 2013 to early 2014 yesterday. Each was released on 600,000-baht bail. (Photo by Tawatchai Kemgumnerd)

According to the source, the group is likely to be allocated jobs in the Commerce Ministry, the Industry Ministry and the Tourism and Sports Ministry.

Mr Somsak, also a PPRP list-MP, admitted on Tuesday that he hopes to be allocated a cabinet post, but said that the division of portfolios is yet to be finalised by party executives.

In related news, Wirat Rattanaseth, a PPRP party list-MP, has played down reports that he is one of two front-runners to become House speaker.

He said it was unclear who would be nominated by the party, but added that he would accept any role which the party deemed him fit for.

On Tuesday at a seminar hosted by his party, PPRP leader Uttama Savanayana gave assurances that party unity remained strong amid reports that support for the two contenders was causing a schism.

He said the party has yet to discuss the matter and noted that there are several qualified MPs for the party to choose from.

He insisted only one PPRP MP would be put forward for the post when the House convenes to make the appointment.