Paiboon: Charter allows Senate to vote alongside House on crucial bills such as budget

As political parties rush to cobble together a coalition with a majority in the House ahead of the vote for prime minister on Wednesday, a senator and an MP are floating the idea of a minority government, which they say is accommodated by the 2017 constitution.

Their basic idea is to get the junta-appointed Senate to vote alongside elected MPs on all key issues to address any obstacle as there are constitutional provisions that allow it, they say.

Paiboon Nitawan, a party-list MP with the People Reform Party, one of the 10 microparties whose popular vote was below the threshold, said on Friday the political situation had not yet reached a deadlock.

Popular belief has it that a government must have more than half of the votes in the House of Reprsentatives, or 251 seats at a minimum, or it can't push through budget bills and survive no-confidence debates. But in Mr Paiboon's view, this is not the case with the 2017 charter.

“For budget-related bills, we can have both the Senate and the House of Representatives vote on them by stipulating Section 270 of the charter,” he said.

The provision allows both houses to decide whether to jointly vote on a reform-related law, the definition of which shall be decided by both houses.

“If the majority of the MPs launch a censure debate that removes the Prayut 2 government, both houses can nominate him back for another term as Prayut 3. In this case, the opposition can’t even launch another censure debate against him again for a year [Section 124 of the charter],” said Mr Paiboon, who previously served several terms as an appointed senator.

The Palang Pracharath Party is still attempting to line up enough MPs for a coalition, which would be headed by Gen Prayut Chan-o-cha, the coup leader who has led the government for the past five years, as prime minister.

His views were shared by Seree Suwannapanont, a senator and former member of the now-defunct National Legislative Assembly.

Mr Seree wrote on Facebook on Friday that a minority government was possible and the constitution even supports it.

A government needs a majority of the votes in the House to help protect itself or its leader during a no-confidence debate, he wrote.

“Despite blatant corruption, he/she could sail through, protected by the majority. The MPs give him/her a vote of confidence even though it runs against public sentiment. This enables a corrupt government to stay on or remain ‘stable’.

“It could be the intention of the 2017 constitution that the election of the prime minister requires more than half the votes of both houses, or 376. This means a government may need fewer than 250 [half of the House]. It may be a minority government in the House of Representatives but that doesn’t mean it is not stable.”

If the government is not corrupt and works efficiently, there is no need for it to have more than half of the MPs to protect it, he said.

As for legislation, the more than 400 laws the junta-appointed NLA had passed over the past five years should be enough for a government to rely on to administer the country, said Mr Seree.

“And if MPs do not agree with any bill, the [minority] government can issue a royal decree instead,” he pointed out.

For bills involving the state budget, Section 143 of the charter requires the House to finish deliberating them in 105 days, or it will be considered finished and sent to the Senate, which will finish considering it within 20 days, he wrote.

In his view, a no-confidence debate is no problem for a minority government either.

“If a prime minister is not corrupt or has not done anything wrong but was bullied by a censure debate and voted out by the House, he could be nominated back and voted by both houses to return,” he continued.

Mr Seree concluded that if parties failed to cooperate in forming a government and the country’s problems needed to be solved, the prime minister might dissolve the House as a last resort.

“There’s always a way out. If necessary, a minority government can be formed and I believe the 2017 charter enables it to survive,” he concluded.

Other political observers have expressed scepticism about the two men’s proposals, suggesting they were only intended to prod reluctant parties to join the Palang Pracharath-led coalition.

As of Saturday, only the Democrat and Chart Pattana parties remained undecided. 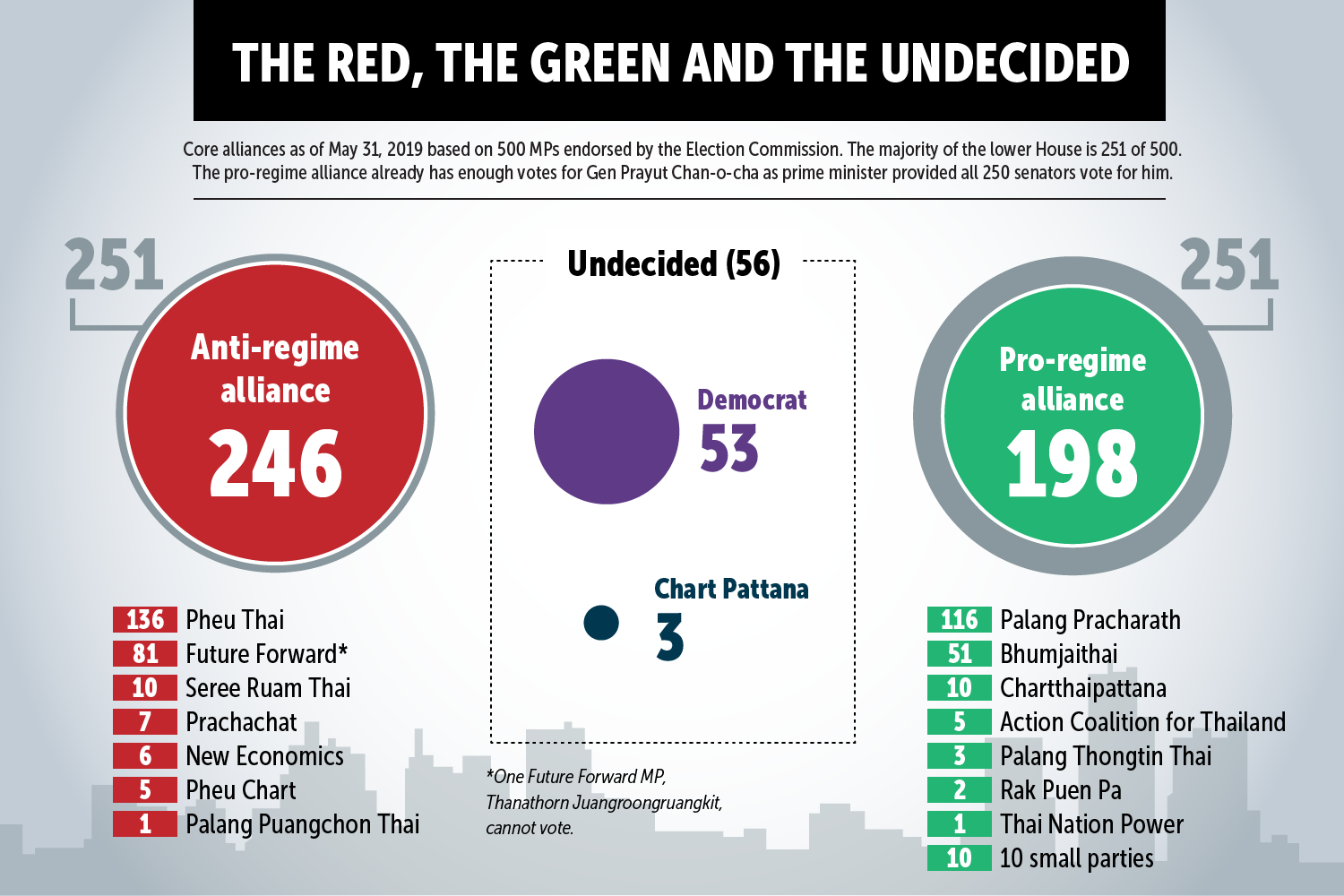