Says he did not confess to charges

Deputy Minister of Agriculture and Cooperatives, Capt Thamanat Prompow, insists he was not jailed in Australia in a drug smuggling case, nor did he confess to any drugs charge as claimed in an Australian newspaper report. 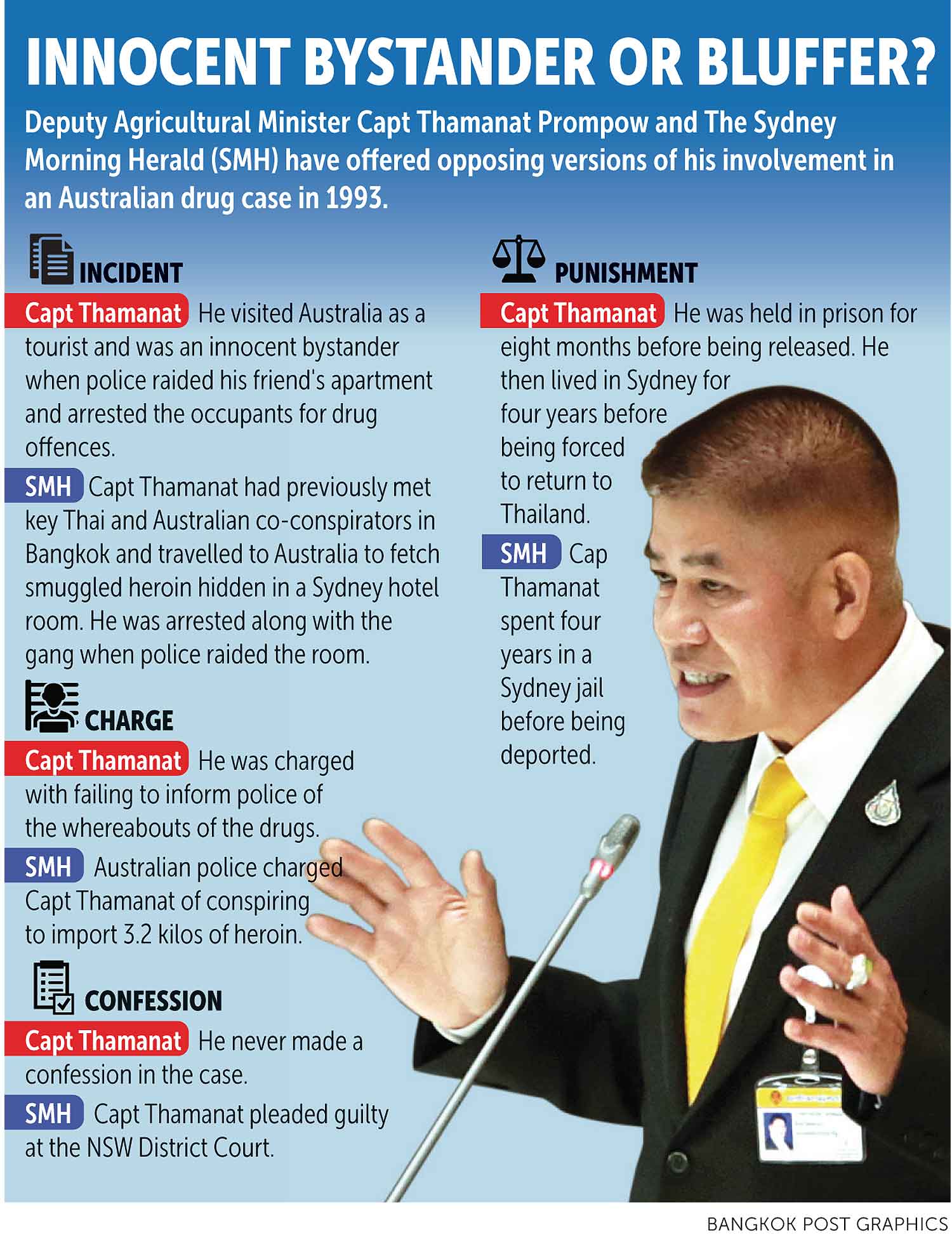 He was responding to a question from Seri Ruam Thai Party MP, Pol Lt Gen Wisanu Muangphraesi, that was intended for Prime Minister Gen Prayut Chan-o-cha during yesterday's House session.

Pol Lt Gen Wisanu wanted to know whether Gen Prayut had checked Capt Thamanat's background when he appointed him as cabinet minister, despite objections being raised about Capt Thamanat's criminal record.

Capt Thamanat said he had spoken to the media several times about the 1993 drug case in Australia, and that he was treated as a witness in connection with a suspect who was later acquitted.

The Australian court suggested that as a witness he stay in Australia until the case was concluded, which took four years, Capt Thamanat said.

This is what he did, he added.

He said anyone who still has questions about his past is always welcome to ask him directly.

The Sydney Morning Herald on Monday published an investigative report saying Capt Thamanat, who went by the name 2nd Lt Manat Bophlom at the time, was a key member of a drug smuggling gang.

He was released and deported immediately after spending four years in jail, according to the report. The report also said he first denied the charges and was sentenced to nine years in jail.

He later confessed and was sentenced to six years.

Seri Ruam Thai Party leader, Pol Gen Sereepisuth Temeeyaves, yesterday claimed he was the one who urged the Australian newspaper to delve deeper into the drug case.

Deputy Prime Minister Wissanu Krea-ngam, meanwhile, said as far as he was concerned the government had run a background check on Capt Thamanat prior to his appointment as a cabinet minister.

Asked if he knew the results of the check, Mr Wissanu said he was only partially informed about them.

Gen Prayut yesterday refused to answer a question whether he would replace Capt Thamanat with a new coalition government coordinator. The PM said he didn't hear the question while covering his ears with his hands.