Future Forward candidate Pairatthachote Chandarakachorn at a campaign rally in Sam Phran district, Nakhon Pathom province, on Sunday, when he called on voters in the by-election to again put their faith in the FFP, as they did at the general election in March. (Photo from @FWPthaiand Twitter account)

The political focus will be on Nakhon Pathom on Wednesday when voters return to the ballot box after the Forward Future MP for constituency 5 stepped down following an accident.

Seven parties are contesting the by-election.

Jumpita Chandarakachorn won the seat for the Future Forward Party (FFP) at the March 24 general election. She resigned on Sept 10 after suffering injuries in an accident that prevent her working.

The party is fielding Ms Jumpita's husband, Pairatthachote, in hope of retaining the seat. Constituency 5 covers most of Sam Phran district, and the FFP is banking on her popularity to again carry the poll on Wednesday.

Ms Jumpita dominated the contest in March with 34,164 votes, almost double the support for her closest rival, Surachai Anutthato of the Democrat Party, who gained 18,970. Voters shocked Phadermchai Sasomsap of the Chartthaipattana Party. The family name has dominated elections in Nakhon Pathom for years, but he managed only fourth place with 12,279 ballots.

"Future Forward needs voters in Sam Phran to show their support for us again," the party posted onTwitter on Monday. Party leader Thanathorn Juangroongruangkit on Sunday told constituents that a vote for the FFP would be a vote of no-confidence in Prime Minister Prayut Chan-o-cha and his government.

Democrat leader Jurin Laksanawisit on Monday hoped it would be second time lucky for his candidate.  A decade of experience in local politics was Mr Surachai's selling point, he said. (continues) 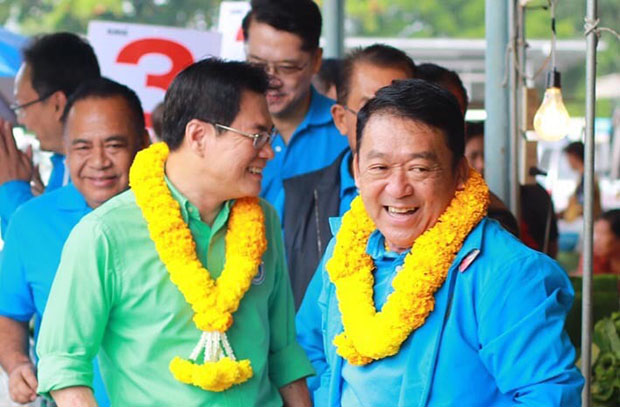 Chartthaipattana front man Varawut Silpa-archa banked on voters once again placing their trust in Mr Phadermchai, who had dominated the constituency until the emergence of Future Forward.

Mr Phadermchai called on voters who support Gen Prayut to cast their ballots for him.

The Democrats and Chartthaipattana are the two main parties in the coalition government contesting the by-election. The prime minister's Palang Pracharath Party, whose candidate Rawang Netphokaew managed only third on March 24, has opted out. The Pheu Thai Party is not in the contest, and supports the Future Forward candidate.