Future Forward Party leader Thanathorn Juangroongruangkit arrives at the Constitutional Court in Bangkok on Wednesday to hear its ruling that disqualifies him as MP. (Photo by Pattarapong Chapattarasill)

The Constitutional Court has ruled 7-2 to disqualify Future Forward Party leader Thanathorn Juangroongruangkit as MP for having shares in a media company when applying to become MP.

Two judges of the court, Panya Utchachon and Worawit Kangsasithiam, took 40 minutes to read the ruling, which began at 2.30pm on Wednesday.

The case was submitted by the Election Commission (EC), which asked it to disqualify Mr Thanathorn for having shares in a media company, a prohibition under the 2017 Constitution. The intention of the clause is to create a level playing field among MPs and having influence in a media company is viewed as an unfair competition.

For the March 24 election, FFP filed the names of its list MP candidates with the EC  on Feb 6, the date Mr Thanathorn was considered to have officially applied.

Mr Thanathorn held 675,000 shares in V-Luck Media Co, which he said was closed on Nov 26 last year. Earlier, he told the court that he sold the shares to his mother Somporn on Jan 8 and his mother paid him 6.75 million baht in cheque dated on the same day.

However, the court said it did not see any official evidence reflecting the change in shareholders which should have been reported to the Business Development Department promptly, especially since Mr Thanathorn's political future depended on it.

The change in the register of shareholders of V-Luck Media was reported to the Department of Business Development (DBD) at the Commerce Ministry on March 21.

The change in the shareholder register is simply an annual update that all companies have to submit to the DBD. For obvious reasons, the law does not require companies to inform the DBD every time a share transaction occurs.

But in the V-Luck case, the court said the company had in the past reported any change of its shareholding structure through electronic means without delay but failed to do so for the latest change.

The court also said that the cheque from Mrs Somporn was cashed after 128 days, or on May 16, the date the Election Commission filed the case with the court.

The court found this unusual given that since 2017 Mr Thanathorn had usually cashed his cheques worth at least 3 million baht each within 42-45 days.

The court dismissed the argument of Mr Thanathorn's wife Rawipan that she had been too busy to cash the cheque because she just had a baby. It viewed the couple could have asked someone to do it for them since it was an account-payee cheque.

The court also dismissed Mrs Rawipan’s claim that the cheque had to be sent to the EC as evidence in the case. It said Mr Thanathorn told it he had sent only a copy of the cheque to the EC and the real cheque could have been cashed right away. 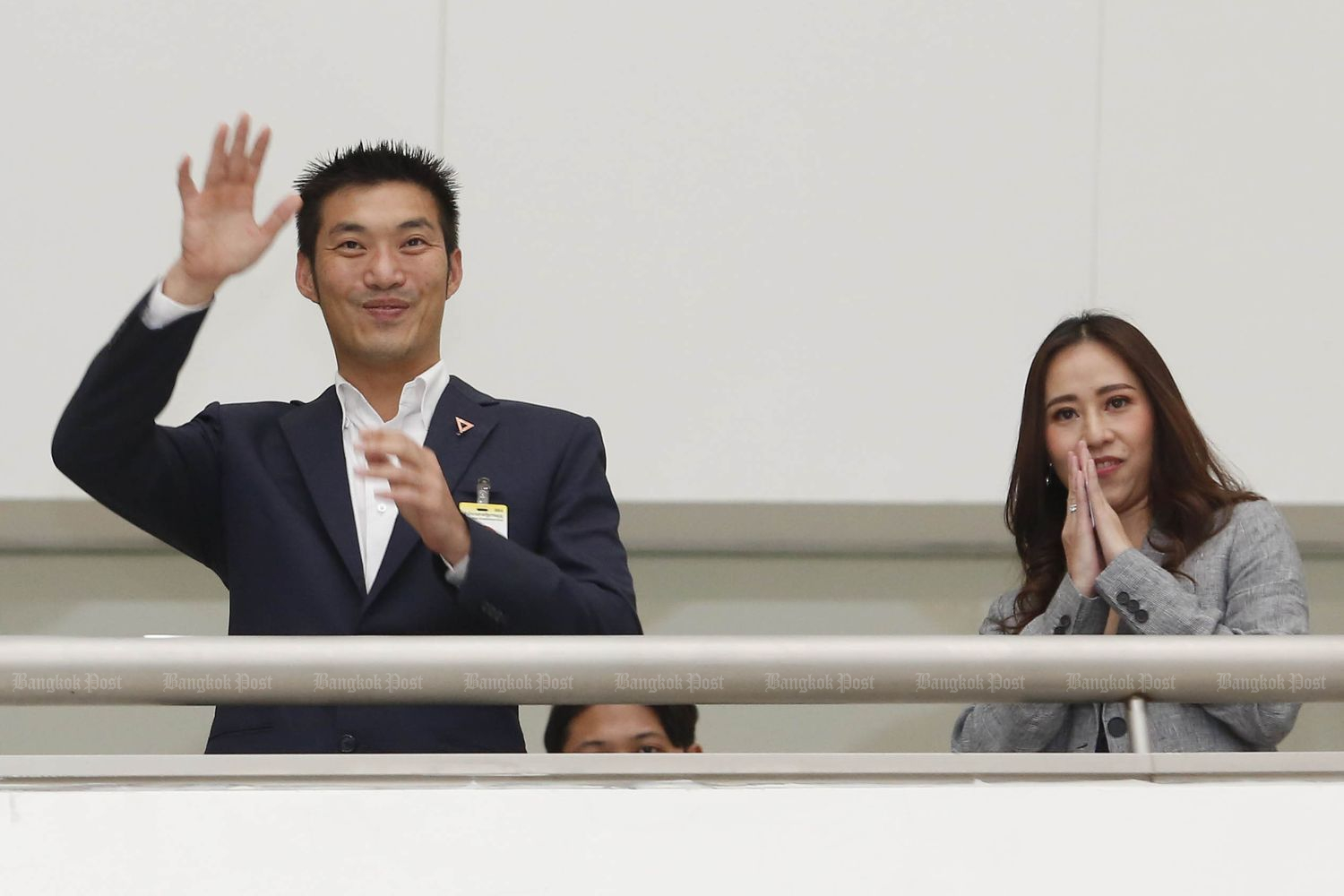 Mr Thanathorn and his wife Rawipan greet supporters before hearing the ruling at the Constitutional Court on Wednesday. (Photo by Pattarapong Chatpattarasill)

There was also no official record of the closure of V-Luck, the court said, and the company could have continued its business that included printed media and publishing any time.

Mr Thanathorn was seen campaigning in Buri Ram province on Jan 8 and he claimed he had driven to his house in Bangkok on the same day to transfer the shares — he had submitted speeding tickets as proof.

To this, the court said the testimony only proved he was in Bangkok on that day but there was no evidence the share transfer could have taken place on the day.

The court dismissed all documents, including those concerning the share transfer, supplied by Mr Thanathorn in his defence. It said they were issued by V-Luck Media, which kept them to itself and none of it was official documents recorded by the Business Development Department to prove the share transfer.

Due to these irregularities, the court ruled he still held shares in the media firm when applying for candidacy and therefore lost his status as the list MP.

Since Mr Thanathorn has already been suspended from duty pending the court’s decision, the effective date for his disqualification dated back to May 23, when he was suspended.

The disqualification will not affect the number of FFP’s 50 list MPs since the MP candidate next on the list will be moved up within seven days.

After the ruling, the EC must take further action against Mr Thanathorn under Section 151 of the election law. The clause says: "Anyone who applied to become an MP knowing he was not qualified...shall face a jail term of 1-10 years, a fine of 20,000 to 200,000 baht and a ban from politics for 20 years". It will have to file a case to the Supreme Court for politicians to make the final decision.

Mr Thanathorn said after the ruling his wife always handled all financial matters of the household and in his opinion, it was entirely up to his family to decide who should cash cheques.

On the court’s concern that V-Luck could continue its business at any time, he said it should take legal action against him if and when it happened.

He pledged to continue his political role outside parliament for constitution amendments and key bills, especially the military service bill of his party which aims to replace conscription with voluntary service.