Says nothing wrong with 'off-budget' tab

The government and the Defence Ministry on Monday came out in defence of off-budget money after it came under close scrutiny from Future Forward Party (FFP) leader Thanathorn Juangroongruangkit.

Deputy Prime Minister Prawit Wongsuwon said off-budget money was used to provide welfare benefits for its troops, low-income state employees and the general public and its disbursement was transparent and under scrutiny at all levels.

Asked if the government would make changes to off-budget spending or return the money to the state coffers, he said there was no need to explain the issue further.

"I'm explaining it right now. What else needs to be explained?" he said.

He insisted the ministry was doing things by the book, noting the fiscal laws make it clear what money must, or must not, be returned to the state.

Gen Prawit questioned the motive behind the criticism of the off-budget spending, saying the move was simply to cause misunderstanding among members of the public.

Mr Thanathorn brought up the issue last Friday as he announced his resignation from an extra-ordinary House committee scrutinising the budget expenditure for the 2020 fiscal year. 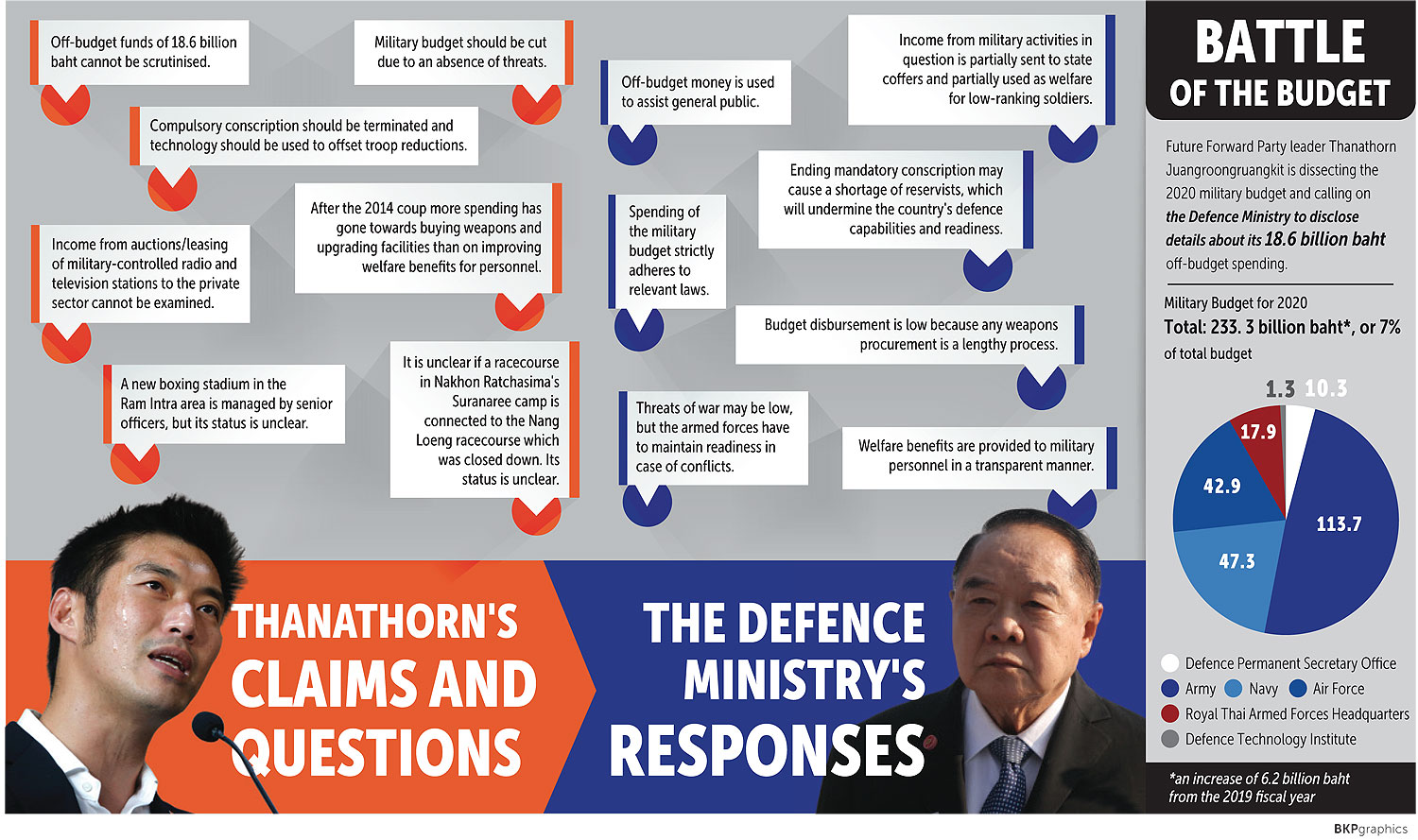 On Sunday he gave a public lecture on the topic and urged the Defence Ministry to disclose details about its off-budget spending for transparency and accountability. He also dissected the 2020 military budget at the lecture and called for the scrapping of compulsory conscription.

Gen Prawit, who is in charge of security affairs, said the FFP leader should abide by the law when leading a campaign drumming up public support for an FFP-sponsored draft bill to terminate mandatory military conscription.

Defence Ministry spokesman Lt Gen Kongcheep Tantravanich welcomed the FFP's proposal on the scrapping of conscription while arguing that it was unlikely to happen soon because there are not enough volunteers signing up for military service.

He said voluntary military service was nothing new and it was, in fact, part of the long-term military reforms which include the development of the reserve forces and defence training systems. He also noted that several countries in Europe were considering adopting military conscription.

"It's too early to scrap conscription. And we have to sit down and consider the impact on national security among other aspects. Increasing pay and welfare benefits [as incentives] is good but it may also cause financial burdens in the long run and may affect pay rises and benefits for state officials," he said.

Lt Gen Kongcheep also expressed concerns about how the use of incomplete information could cause misunderstanding and confusion among the public.

Natcha Boonchai-insawat, FFP deputy spokesman, on Monday played down a recent poll which suggested that the majority of people still agreed with military conscription.

According to Super Poll, 61.4% of the respondents agreed that conscription remained necessary for Thailand, against 18.4% who disagreed. The survey was conducted on 3,084 people on social media platforms and 1,250 people in traditional interviews during Nov 15-30.

Mr Natcha said the party saw the poll result as surprisingly positive because the issue was complicated and the party thought only 20% would agree with voluntary military service.

He said the FFP's campaign for the scrapping of conscription was at a very early stage and the party was encouraging all parties to share their views.

He said the party-sponsored draft bill did not just seek to abolish conscription, but it also provided incentives for voluntary military service as well as proposals on how to increase the capabilities of the armed forces.

"I insist the party's policy will ensure that the number of troops is maintained. There are a lot of details in the draft bill, and we'll campaign again this weekend so that the people understand this first step of our military reforms," he said.

Prime Minister Prayut Chan-o-cha, on Monday suggested that people should study history, saying that they would find an answer for themselves why wars started and why the country must be prepared.