Thousands of people rallied on Saturday in central Bangkok for the biggest protest since before the 2014 coup, as Future Forward Party leader Thanathorn Juangroongruangkit declared it was “just the beginning” of a movement against anti-democratic forces.

Mr Thanathorn called the protest on Friday after moves to ban his party, which has emerged as the most vocal challenger to the government of former military ruler Prayut Chan-o-cha.

“Today is a show of strength so that in future others may join us,” Mr Thanathorn told the crowd on the skywalk linking the National Stadium and Siam BTS stations. “We’re just here today as a test run. Prayut, don’t be afraid yet. The real thing is next month.”

Several protesters chanted: “Prayut out!” while many held placards showing how they felt. (continued below) The one-hour rally ended shortly after 6pm and the party thanked supporters on Facebook for their “powerful expression”.

“We’ll meet again in the future,” read the post, adding “the same roll of film is being rerun but the end won’t be the same. … Today is just a taste”.

Mr Thanathorn went live on Facebook on Friday calling for a peaceful protest in the face of a possible ban on his party.

He urged people to stage a flash mob under the theme “When the voice we chose for Parliament is worthless, it’s time for people to make their voice heard.”

Participants were asked to write sticky notes expressing their feelings. The purpose was to attract young people to the “reality world” instead of being politically active only online.

“We reject all kinds of violence, be it from the demonstrators or be it from government officials,” Mr Thanathorn told reporters ahead of the protest.

“We believe that it’s time for the people who will not tolerate any more the NCPO regime to show themselves, to show their willingness to participate in politics,” he said, using the name of the former junta, the National Council for Peace and Order.

In Chiang Mai, a group of students called the Liberal Assembly of Chiang Mai University for Democracy urged people to gather at Tha Pae Gate at 5pm on Saturday to show solidarity. (continued below)

A demonstration at Chiang Mai's Ta Pae Gate around 17.00, under the slogan "when our vote in Parliament means nothing, it's time for the people to make their voice heard."

Mr Thanathorn’s call for supporters to mobilise has revived memories of the spasms of protest over the past two decades of turbulent politics that were interrupted by coups in 2006 and 2014.

But he said he did not want to revive those disturbances or to see violence similar to what has been taking place in Hong Kong this year. (continued below)

Police in Pathumwan district said they had not received a request for a gathering in line with the law on public gatherings, but they made no apparent attempt to block Saturday’s rally.

Prime Minister Prayut complained earlier that it was inappropriate to organise a demonstration towards the end of the year when people were in a celebratory mood.

Earlier on Saturday, Mr Thanathorn signed an agreement with six parties in an opposition alliance to push for changes to the constitution that was drawn up by the junta before the March 24 election.

The Election Commission (EC) said this week that it would ask the Constitutional Court to disband the Future Forward Party (FFP) on the grounds it had accepted money or other benefits from “an illegitimate source” under Section 72 of the Political Parties Act. It did not elaborate.

Mr Thanathorn lent 191 million baht to the party. Critics question whether this is against Section 66 of the Act, which prohibits a donation of more than 10 million baht to a party by any individual in any one-year period.

Supporters of the EC’s decision say Mr Thanathorn shot himself in the foot by making the loan when no other parties engaged in similar practices. They claimed it could have given the FFP an edge over other parties in the March election.

While they admit that a loan is not the same as a donation, a party is required by law to spend its income only for very specific purposes, and loan repayment is not one of them. Future Forward is therefore not in a position to repay the money even if it can afford to do so, meaning the loan could be construed as the same as a donation in this case. (continued below) 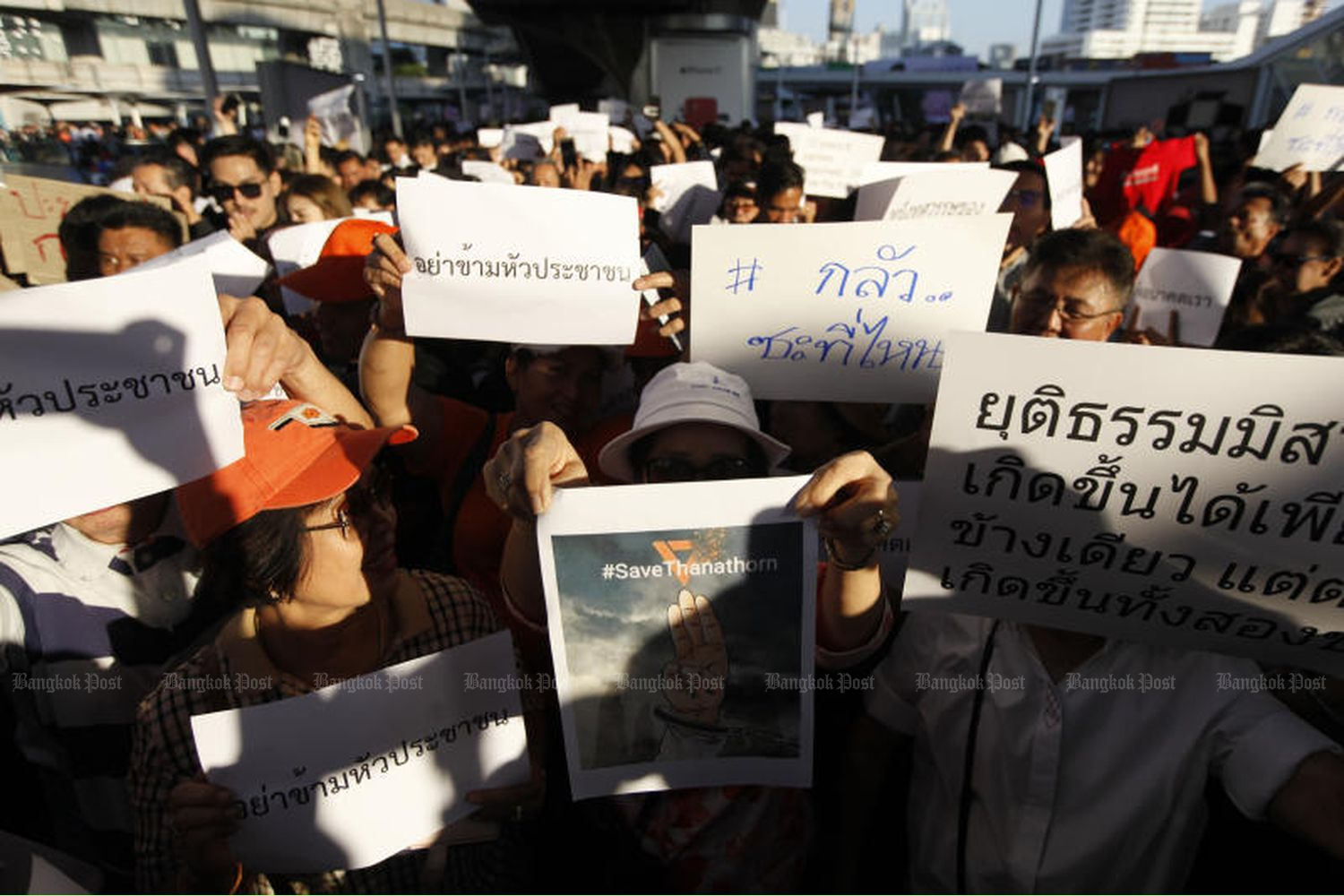 Some of the placards held by the demonstrators. One of them reads: "Don't disrespect people" while another shows a viral hastag: "who's afraid?". (Photo by Wichan Charoenkiatpakul)

The party executives and supporters beg to differ.

They argue that the loan is not a donation and the party had already paid some of it back. Even if Mr Thanathorn’s lending is interpreted as a donation, that would merely violate Section 62 of the same law, for which the penalty is only a ban from politics of party executives but no party dissolution.

Section 72 of the law was cited for the purpose of disbanding the party, they say, since the intent of the section is to prevent politicians from receiving money from illegitimate sources linked to criminal activities. Unless it can be proven that Mr Thanathorn’s money was acquired from criminal sources, there are no grounds to apply the section to dissolve the party, they maintain.

They believe the EC declined to use Section 66 on donations against Mr Thanathorn because the penalty does not include dissolution of the party.

Future Forward secretary-general Piyabutr Saengkanokkul has coined the word “law-fare” to describe the legal challenges the party is now facing.

The issue of “illegal money” in Section 72 is not the amount, he said, but refers to money gained from illegal activities like gambling, weapons trading and sale of untaxed products. In short, Mr Piyabutr said, the law does not want to see political parties supported by “grey money”. 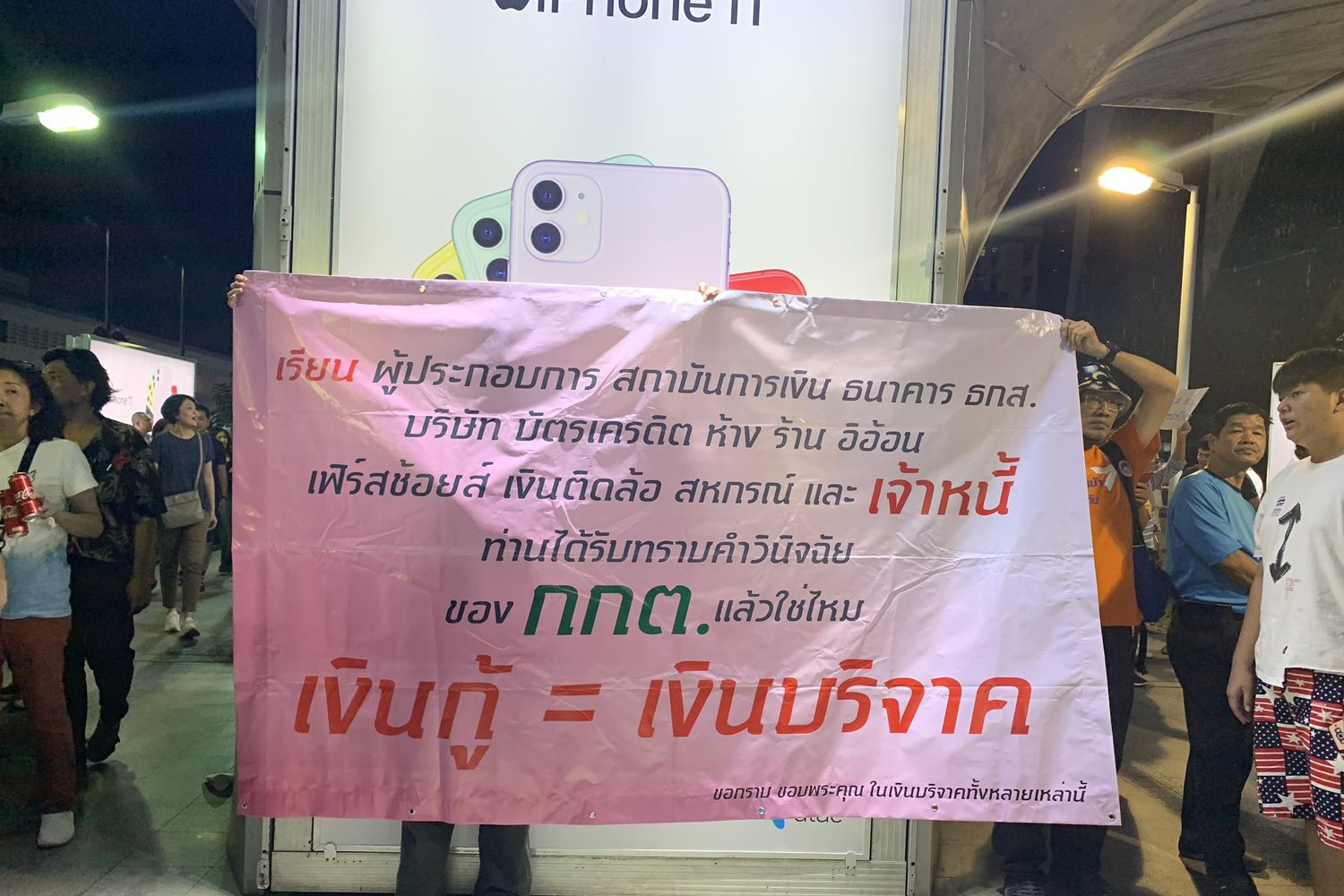 A man shows a poster which reads: "To operators, financial institutions, credit-card issuers, shops, Aeon, First Choice, Ngern Tid Lor, cooperatives and creditors, you heard the EC, didn't you? Loans = donations" Thank you very much for your donations. (iLaw photo)