Abhisit Vejjajiva, then the Democrat Party leader, hits the campaign trail in the Sutthisan, Din Daeng and Huai Khwang areas of Bangkok on Feb 19 last year, camapaigning ahead of the March general election. (File photo)

Thailand was the biggest mover in The Economist Intelligence Unit's 2019 Democracy Index, rising 38 places in the global rankings to become a "flawed democracy" rather than a "hybrid regime".

"The biggest score change in Asia occurred in Thailand, which finally held an election in March 2019, the first since the military coup in May 2014. Voters had a wide array of parties and candidates from which to choose, and this helped to restore some public confidence in the electoral process and the political system," the EIU said.

"The election led to improvements in the scores across all five categories of the Democracy Index, but the sharpest increase was recorded for electoral process and pluralism."

In rankings revealed on Wednesday, Thailand was ranked 68th out of 167 countries with an overall score of 6.32 out of 10. The country was awarded 7.42 points for electoral process and pluralism, 5.36 for functioning of government, 6.11 for political participation, 6.25 for political culture and 6.47 for civil liberties.

According to the report, 2019 was a testing year for democracy in Asia. Hong Kong slipped a further three places in 2019, from 73rd to joint 75th, amid a deterioration in political stability.

Meanwhile, India dropped 10 places, to 51st. The primary cause given for the democratic slide was an erosion of civil liberties in the country.

Asia's average regional score stalled at 5.67, in another illustration of the difficulties in establishing and consolidating democracy in many developing countries.

Among the 167 countries ranked, 22 were categorised as full democracies, encompassing 5.7% of the world population. 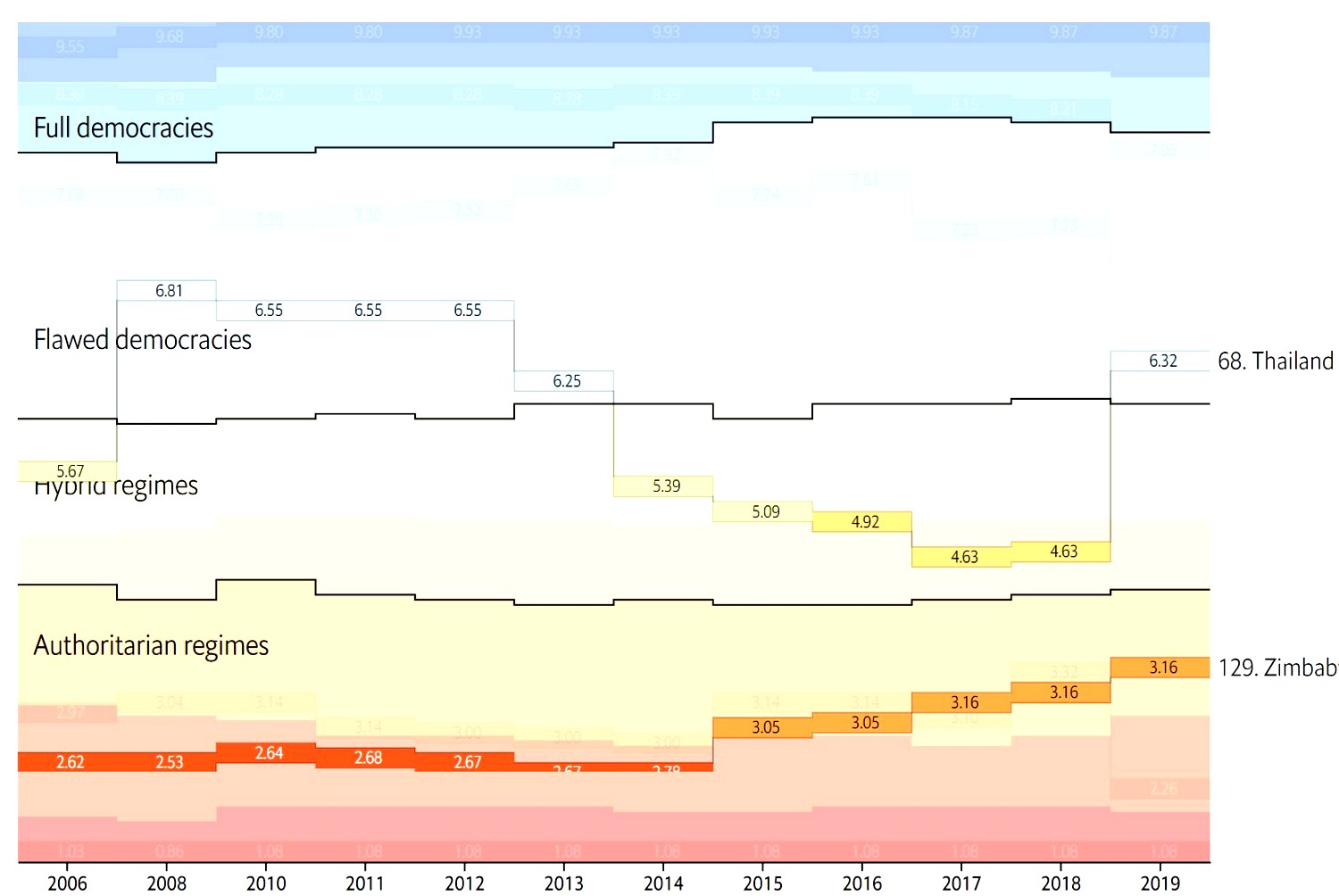 Asia's top-scoring country was New Zealand (9.26), which retained its 4th position in the global ranking, while persistent laggard North Korea (1.08) was bottom in 167th place. Australia and New Zealand are the region's only two “full democracies”. South Korea and Japan are very close to attaining "full democracy" status, but remained “flawed democracies” in 2019.

While China fell to 153rd position, Singapore’s ranking dropped from 66th to joint 75th. The introduction of a "fake news” law in Singapore led to a deterioration in the score for civil liberties in the city-state, the EIU said.

Since 2006 when the EIU began producing the Democracy Index, the Asia and Australasia region has made the biggest advances of any region in the global rankings. However, it continues to lag behind North America (8.59), western Europe (8.35) and Latin America (6.13). The region made rapid progress in the decade up to 2016 and its average score peaked at 5.74 that year. However, the average regional score declined significantly in 2017 and remained unchanged in 2018-19.