Students raise their mobile phones during a protest at Srinakharinwirot University in Bangkok on Wednesday. (AFP photo)

A group of students from the school (#สวที่อยู่ข้างประชาธิปไตย), wearing casual clothes, assembled in the afternoon at the Democracy Monument across the street from their school, showing pro-democracy posters.

According to unconfirmed reports, the school management did not allow them to stage a rally inside the compound, citing the need to remain neutral and forcing the students to move to the Democracy Monument. 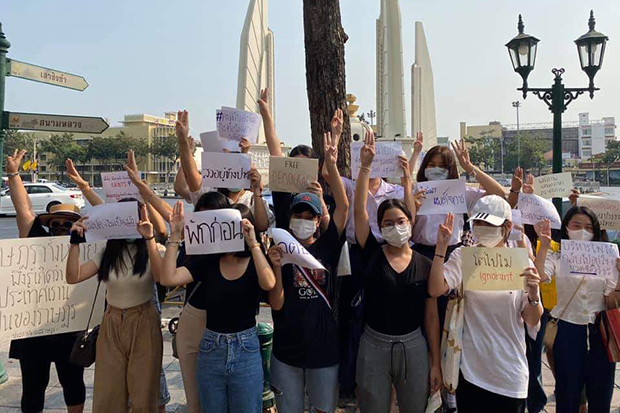 Students from Satriwithaya School assemble at the Democracy Monument on Ratchadamnoen Avenue in Bangkok on Wednesday afternoon. (Twitter@AmaratJeab)

“We came today not on behalf of the school but as members of a new generation who don’t want the monument to be just a place where vehicles make U-turn,” one of them told Matichon Online.

She was referring to the Democracy Monument at the centre of the roundabout in front of her school. Built in 1940, the place is a symbol of the transition to constitutional monarchy and has been used as protest venues.

She said her group had chosen to stand for democracy geographically and ideologically.

“We insist we do not chang chart [hate the nation]. What we hate is a dictatorship,” she added, referring to the term frequently used by pro-military people.

To make the point, the group subsequently sang the national anthem.

Another demonstrator admitted she felt fear. “It’s not that we’re not afraid. But we have to come out. If we fail to do it today, we don’t know when a more appropriate time will be. After all, the 'fire of democracy' has been lit.”

According to their schedule, they will move to join the rally by Silpakorn University Tha Phra on Wednesday evening.

Some students from Triam Udom Suksa School (#เกียมอุดมไม่ก้มหัวให้เผด็จการ) also planned to assemble at 8.30am on Thursday.

Bodindecha (Sing Singhaseni) School in Bangkok’s Wang Thong Lang district  joined the trend by asking people to share its hashtag #ลูกบดินทรไม่อินเผด็จการ, but did not set a date for a rally.

Meanwhile, university students continued to hold rallies in their campuses on Wednesday evening. They were: