Prawit: Needs time to 'think about it'.

All eyes are on Deputy Prime Minister Prawit Wongsuwon who is expected to be nominated to become the new leader of the ruling Palang Pracharath Party (PPRP) following the resignation of 18 members of the party's executive committee amid speculation of ongoing internal conflict among factions within the party.

The resignations have triggered the need for the party to elect a new leader and executive committee within 45 days.

The outgoing committee is to remain on duty, pending the election of the new executive committee.

Asked whether Gen Prawit, the party's chief strategist, could be elected as leader, Mr Paiboon did not reply directly to the question, saying only that Gen Prawit is already the main pillar of the PPRP. 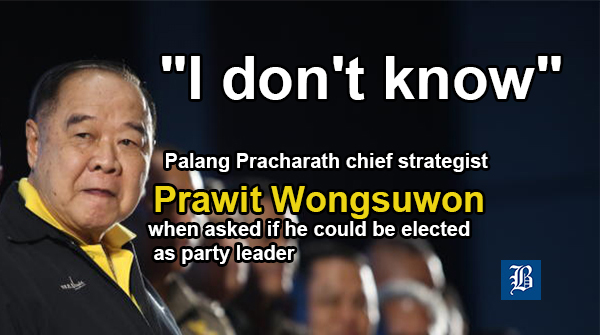 PPRP MP for Bangkok Sira Jenjaka told reporters on Monday that when the nomination process takes places, he will nominate Gen Prawit for leader, and Anucha Nakhasai, a Chai Nat MP, as new secretary-general.

Mr Anucha is a key member of the Sam Mitr (Three Allies) group -- a faction that was credited for much of the PPRP's success in last year's general election that swept it to power.

Mr Sira said that from now on, current party leader and Finance Minister Uttama Savanayana, and secretary-general Sontirat Sontijirawong, who is also the Energy Minister, will no longer have the power to run the party's affairs.

Asked what was behind "the changing of the guard", Mr Sira said that this was a deal when the party was formed that the current executive committee members were given one year to work, and their performance would then be assessed.

"They now must admit that it is time for a change," Mr Sira said.

Asked by reporters about the prospects for a cabinet reshuffle, Mr Sira said that a shake-up is imminent after the three decrees worth 1.97 trillion baht in total to tackle the impact of the coronavirus outbreak sailed through parliament on Sunday.

However, Mr Uttama told reporters that any change in the party's leadership should be decided by party MPs rather than party executives.

"Personally, I don't think it is time to talk about individuals. It is time to work for the sake of the country ... The party is duty-bound to support the prime minister and move the country forward rather than playing political games," he said.

Mr Uttama has lately been caught up in alleged party infighting with factions reportedly plotting to replace him with Gen Prawit, who is the PPRP chief strategist.

Mr Sontirat said that he disagreed with any change in the party's leadership while he concurred that the opinions of party MPs must be taken into account.

"I disagree with the change. I don't want to see political rifts or the old-fashioned style of politics. We must think of the people more than ourselves."

Meanwhile, Gen Prawit said that all PPRP MPs remain unified and must work with him regardless of which faction they belong to. Asked about the prospects of him becoming the new leader, Gen Prawit said: "Let me think about it first because I had no intention to enter politics from the beginning."

Prime Minister Prayut Chan-o-cha said that he did not want any involvement with the resignation of the PPRP executives or any change in the party's leadership because he is not a party member.

He also reiterated that there will be no cabinet reshuffle anytime soon, adding that he would rather focus his attention on efforts to battle the Covid-19 pandemic and ease its economic impact on the public.

It has been speculated that after the crisis eases, some cabinet seats in the may be put up for "rotation" and offered to PPRP executives from its various factions who have not yet served.