A demonstrator waves the national flag as the pro-government Archeewa Chuay Chart (Vocational Students Helping the Nation) stages a rally at the Democracy Monument on Ratchadamnoen Avenue. (Photo by Nutthawat Wicheanbut)

Pro- and anti-government groups separately gathered in Bangkok on Thursday with no incident.

The pro-government group who calls itself the Archeewa Chuay Chart (Vocational Students Helping the Nation) met at the Democracy Monument on Ratchadamnoen Avenue. The rally, which began at 2pm, drew about 500 demonstrators.

Thara Thongkhamdee, a co-leader, insisted the group was not politically motivated, nor was it backed by individuals to counter anti-government movements.

He lashed out at recent rallies for allegedly insulting the royal institution, both directly and indirectly.  His group carried a large Thai flag and a banner with a message “Stop insulting the (royal) institution.’’

The group believed some people might be behind the rallies by the Free Youth and the Student Union of Thailand, said the pro-government group leader.

Thotsaphol Manunyarat, another co-leader, read a statement criticising the Free Youth and the Student Union of Thailand for allegedly disseminating fake information to create misunderstanding among the public about the royal institution.

He said his group was loyal to the nation, religion and monarchy and worried about recent political rallies.

After the statement, pro-government supporters raised three fingers which they described as the three institutions before chanting “Love Live the King’’ and singing the royal anthem. They then dispersed.

The rally was held less than an hour amid tight security by police in both uniforms and plainclothes. 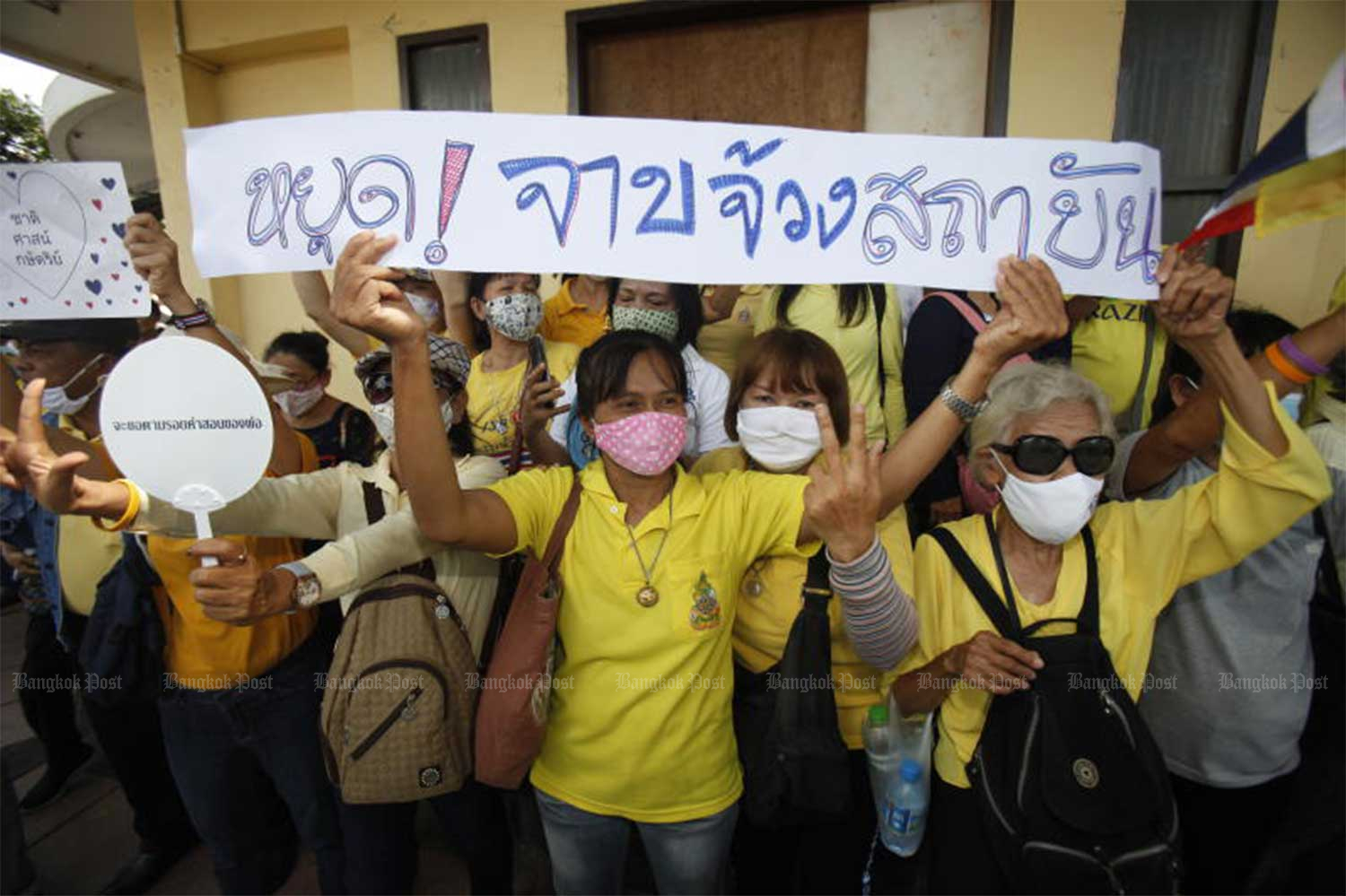 Supporters of the government, wearing yellow T-shirts, hold a placard with a message "Stop insulting the (royal) institute'' as they join the Archeewa Chuay Chart group's rally on Thursday. (Photo by Nutthawat Wicheanbut)

Also on Thursday, demonstrators from the June 24 Democracy Movement gathered in front of Government House to hold activities to oust the government and get rid of dictatorship.

The group also wanted a fresh investigation into the hit-and-run case against Red Bull scion Vorayuth Yoovidhya after public prosecutors dropped all charges against him.

They demanded the government investigate prosecutors and police investigators involved in the case for alleged negligence of duty and malfeasance. Sompas Nilphan, adviser to the Office of the Permanent Secretary, Prime Minister's Office, showed up to received the group’s letter of demands.

The group brought three dishes that need to be washed as a symbolic gesture against the government. The first dish referred to Mr Vorayuth’s case, the second was budgets to buy weapons and the third was the lack of money to help people and new graduates affected by the Covid-19 pandemic.

The group then brought the fourth dish with the image of Prime Minister Gen Prayut Chan-o-cha. Representatives of the group then shouted “Every problem originates from Gen Prayut himself. If this dish cannot be washed, let’s break it.’’

Another anti-government rally was held at King Mongkut's University of Technology North Bangkok on Thursday. Many university students joined it.

Meanwhile, chief opposition whip Suthin Khlangsaeng warned that the confrontation of pro-government and anti-government groups would lead to losses of life and seizure of the ruling power.

The Pheu Thai MP for Maha Sarakham said the opposition would raise a motion to ask the government about security measures, giveen the rising number of gatherings nationwide.

Whenever an anti-government rally is held, another group supporting the government often follows, said the chief opposition.

Earlier, the anti-government rally, led by the Free Youth, attracted thousands of people on July 18.  The rally demanded the government dissolve parliament, stop using oppressive laws against political opponents and rewrite the constitution. Students from King Mongkut's University North Bangkok flash three fingers during their rally at the campus on Thursday. (Photo by Pattarapong Chatpattarasill)