Activists could face life for incident

Protesters fill the road at the Ratchaprasong intersection, where they converged in defiance of the state of emergency put into effect early Thursday. They address the crowd for the first time after protest leaders were arrested by police. (Photo by Arnun Chonmahatrakool)

The Criminal Court on Thursday issued arrest warrants for two political activists suspected of intending to harm Her Majesty the Queen's liberty during a rally on Wednesday.

According to Section 110 of the Penal Code, if found guilty, the pair could be jailed for 16 years to life. The imprisonment would be more severe compared with Section 112, or the lèse majesté law, which carries a term of up to 15 years if found guilty.

The warrants identified the two as Ekkachai Hongkangwan and Bunkueanun Paothon, political activists present at the rally.

The court granted the warrants following a request by Dusit police over an incident about 5.30pm on Wednesday on Phitsanulok Road. 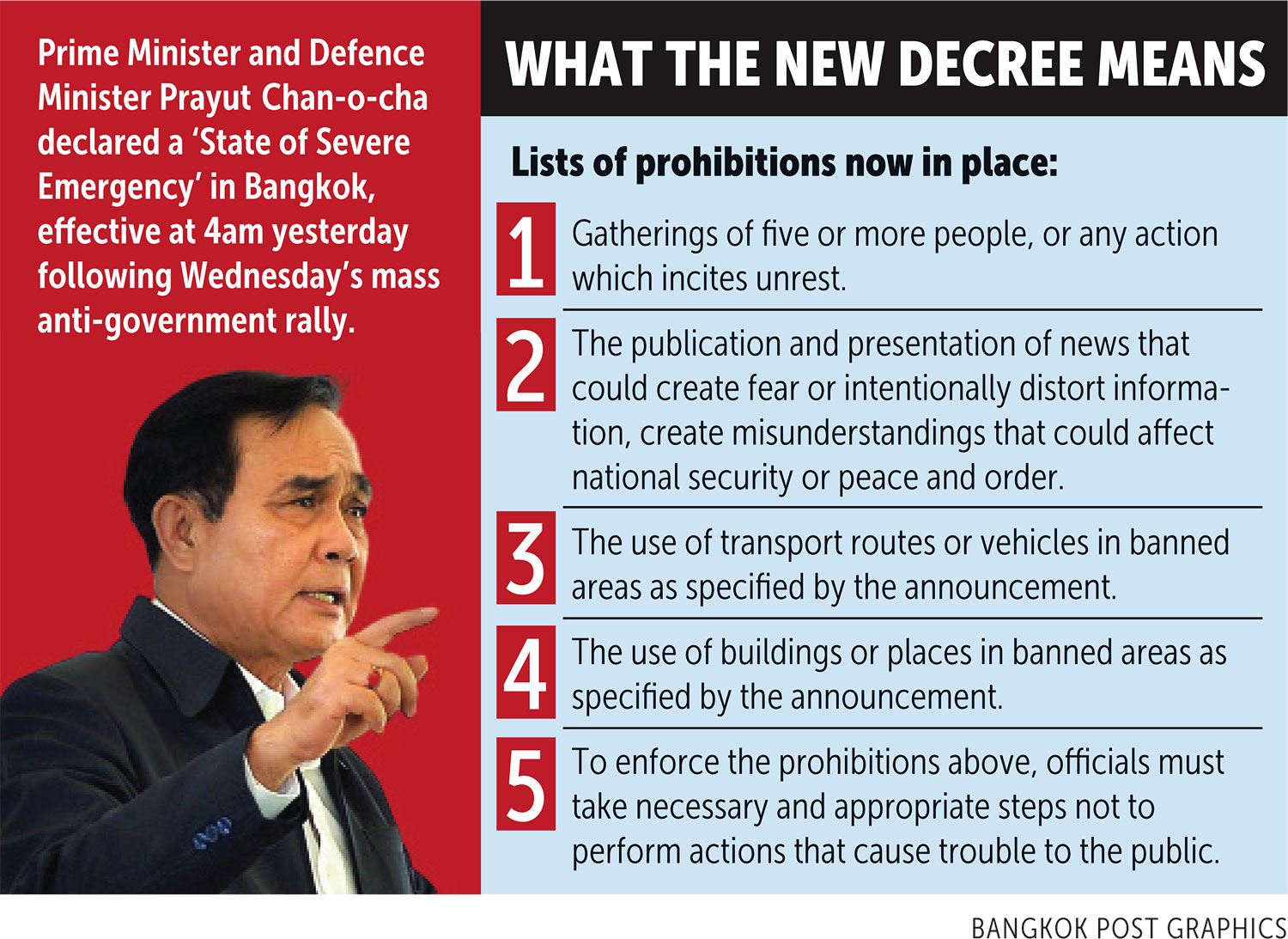 On that day, the royal motorcade of Her Majesty the Queen passed along the road, which was cordoned off by security officers to stop protesters.

However, many protesters got through, and many were seen flashing the three-finger salute as her motorcade passed.

Her Majesty, representing His Majesty the King, was accompanied by His Royal Highness Prince Dipangkorn Rasmijoti.

She was to offer robes to monks as part of a kathin ceremony at Wat Arun Ratchawararam and Wat Ratcha Orasaram.

The rally ended at Government House Thursday morning, but it re-emerged Thursday afternoon, and about 15,000 protesters descended upon the Ratchaprasong intersection in Bangkok.

Prime Minister Prayut Chan-o-cha declared a state of emergency after the motorcade incident. It took effect at 4am Thursday. 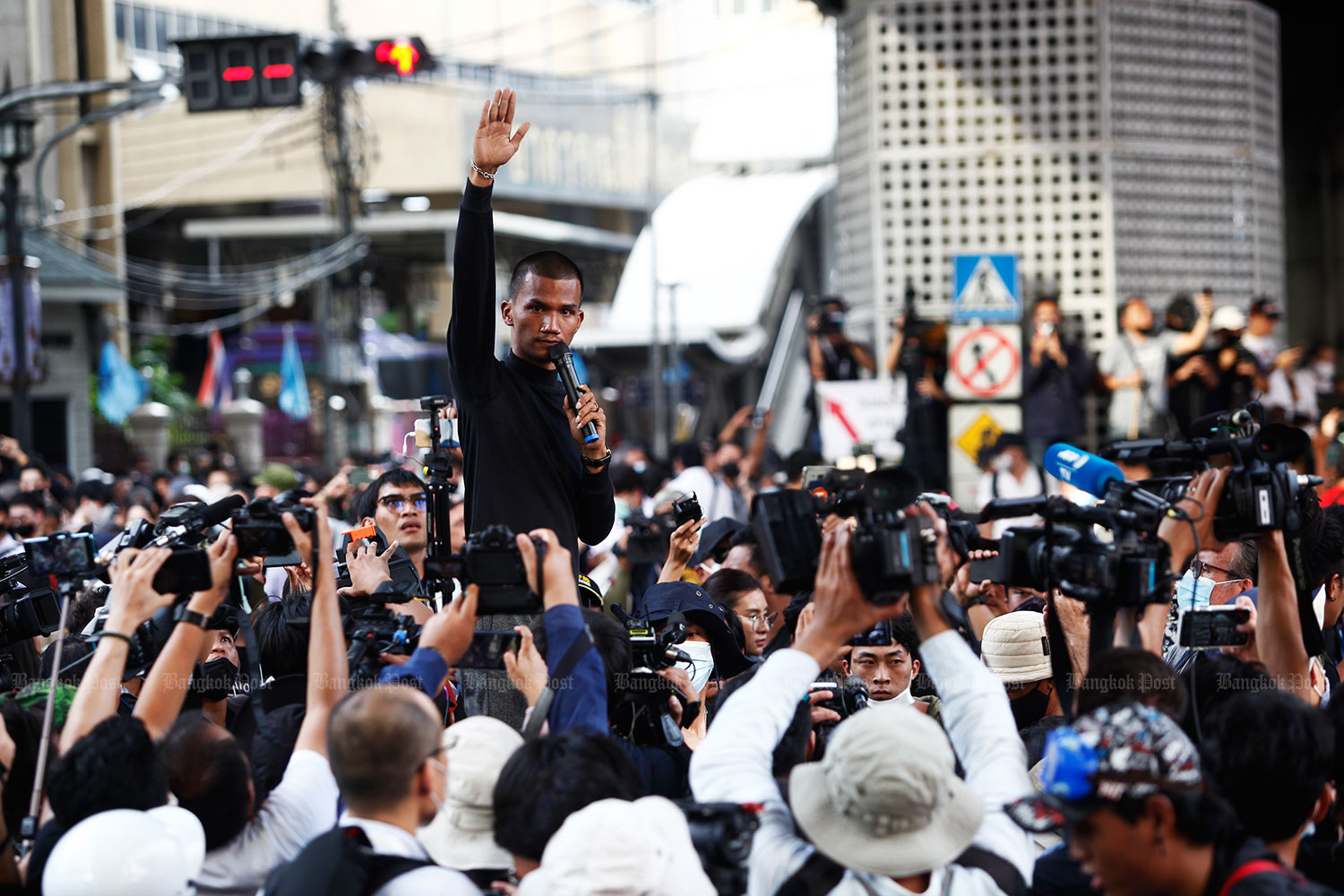 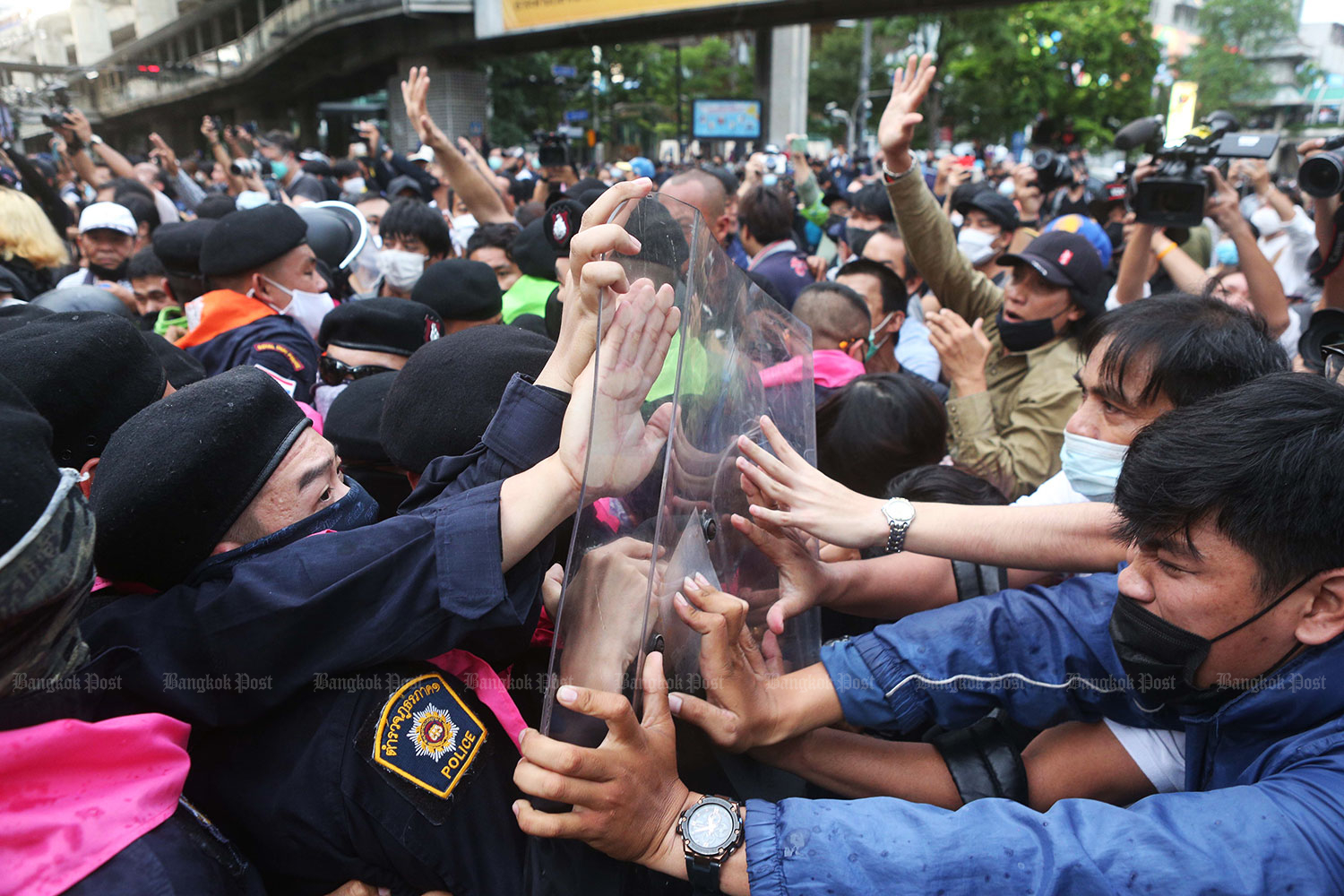 Police and protesters push one another at the Ratchaprasong intersection yesterday. The protesters, who defied a state of emergency declared earlier yesterday, finally gained access to the intersection where rally speakers addressed them amid a heavy presence of security officers. (Photo by Pattarapong Chatpattarasill)

Protesters at Government House were dispersed by police, and they arrested five protest leaders, including Parit Chiwarak, Panusaya Sithijirawattanakul and Nutchanon Pairoj.

Meanwhile, protest leaders Arnon Nampa and Prasit Khrutharoj were arrested in Bangkok and sent to Chiang Mai, where the provincial court issued arrest warrants for them.

A total of 23 protesters have been arrested. Protest leaders among them are facing charges of violating the emergency decree and organising illegal demonstrations.

Before he was arrested, Mr Arnon accused the police of using questionable tactics by leading the Queen's motorcade into the protest area. He said police wanted to paint protesters as users of violence.

Although the allegations were unclear, three senior police were abruptly transferred pending a probe into alleged negligence.

As for the Ratchaprasong intersection rally, Panupong Jadnok, aka Mike Rayong, another protest leader, posted a message on his social media page inviting supporters to gather there at 4pm Thursday.

Mr Panupong showed up, but formerly student Chonthicha Chaengrew said the rally at Ratchaprasong had no particular leader. 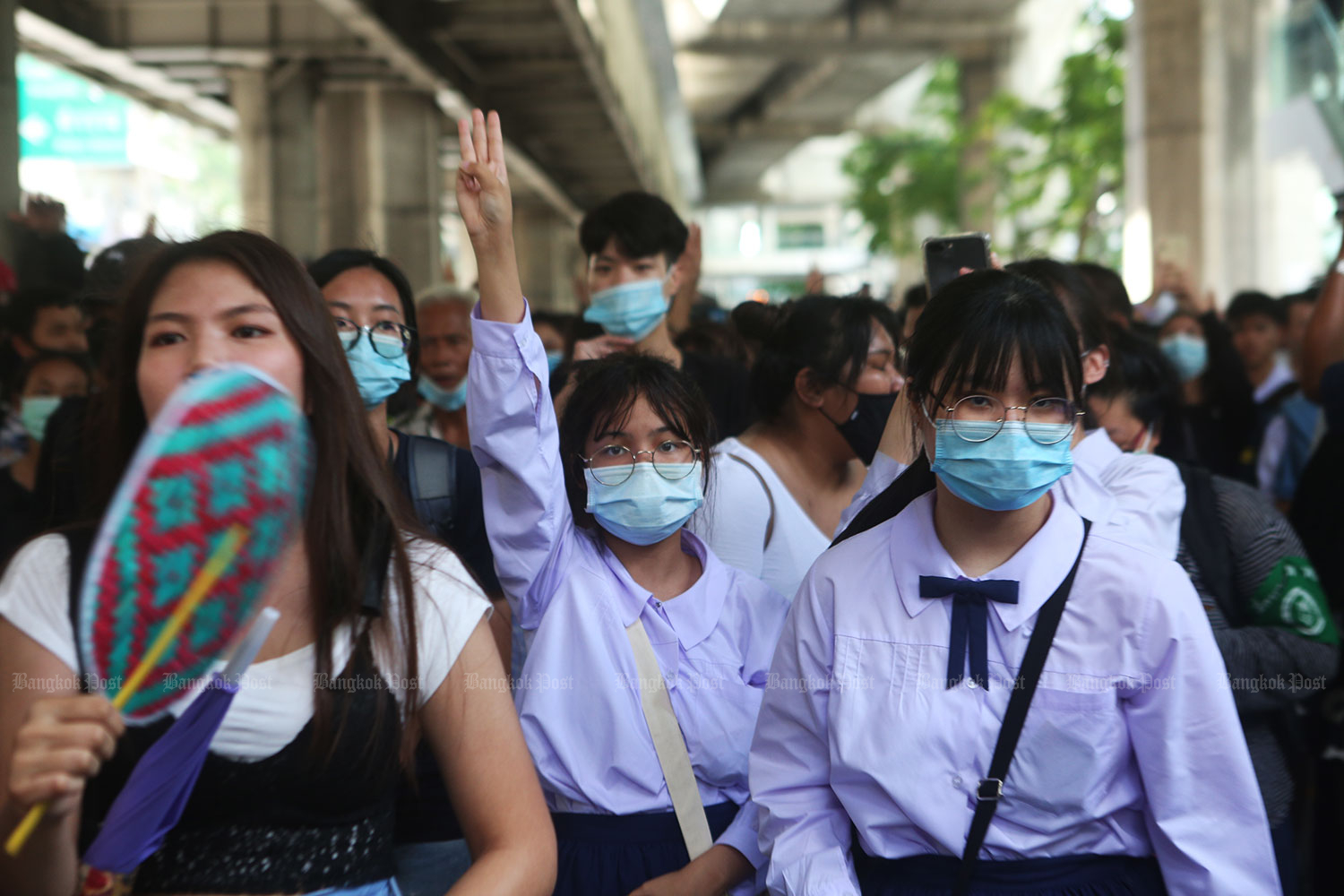 A high school girl flashes a three-finger salute, a hallmark protest gesture, as she and her friend arrive at the Ratchaprasong intersection. (Photo by Pattarapong chatpattarasill) 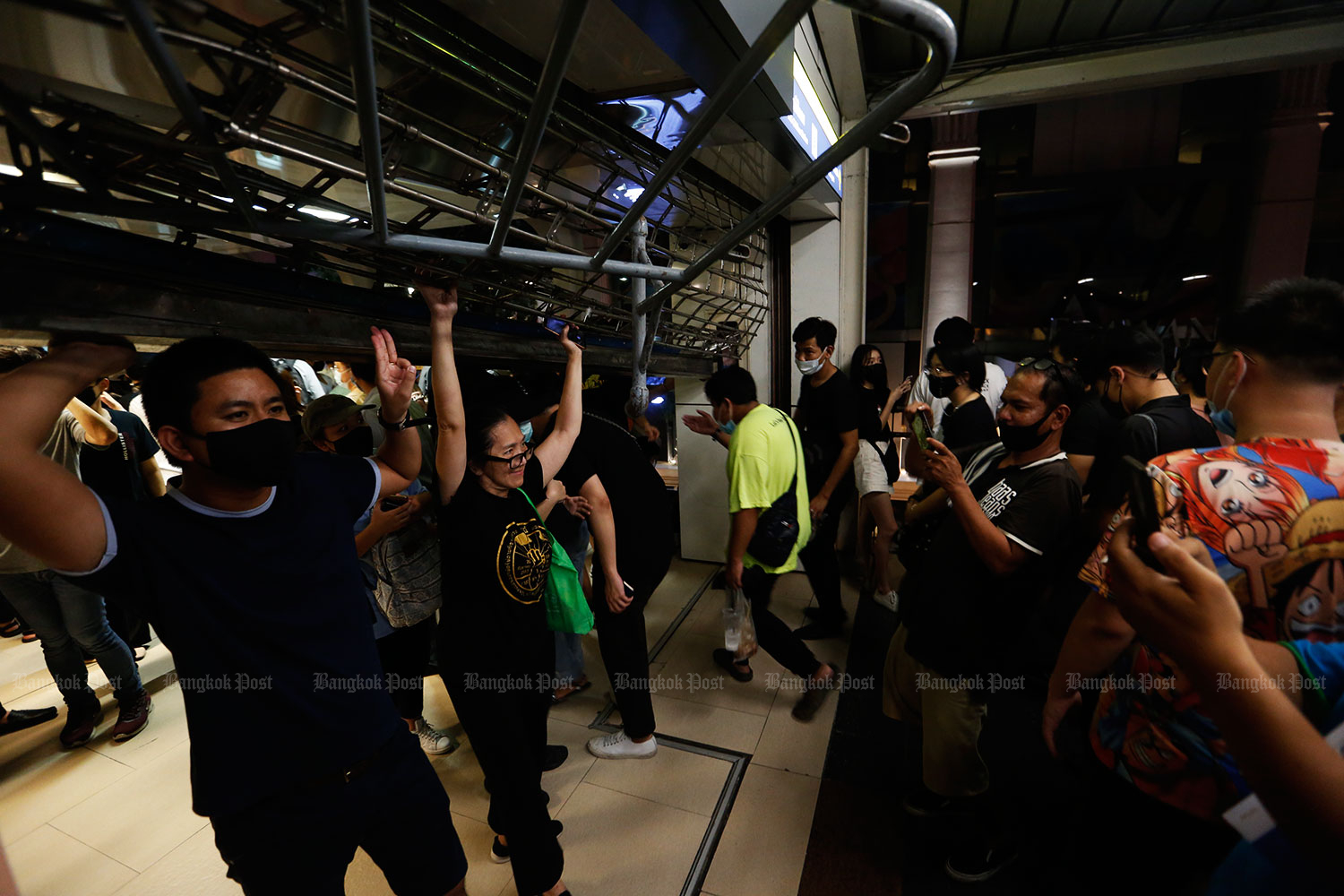 Protesters roll up the shutter to allow others to enter the skywalk overlooking the Ratchaprasong intersection yesterday evening. The protesters seized the skywalk after police declared it off-limits earlier in the day. (Photo by Arnun Chonmahatrakool)

"Down with dictatorship... Get out... Release our friends," demonstrators were heard shouting in front of a shopping complex at the intersection.

Ms Chonthicha said demonstrators will stand by their demands for the resignation of Gen Prayut, the reform of the royal institution and that His Majesty the King refrain from endorsing any future coup d'etat by the military.

Police earlier kept protesters away from a skywalk at the intersection. However, later Thursday evening, many demonstrators flocked onto the skywalk amid concerns about how much weight the structure could support.

The protesters dispersed about 10pm, vowing to return at 5pm today.

Government spokesman, Anucha Burapachaisri, said the state of emergency is needed in Bangkok to prevent a confrontation between people with differing political views, including those who oppose any disrespect towards the monarchy.

The government wanted the protesters to respect the rights and freedom of others, said the spokesman.

The cabinet is scheduled to meet today to acknowledge Gen Prayut's state of emergency declaration in the capital.

Krit Khamtawee, from the Thai Lawyers for Human Rights group, said he has sought bail for the five protesters arrested in Bangkok. 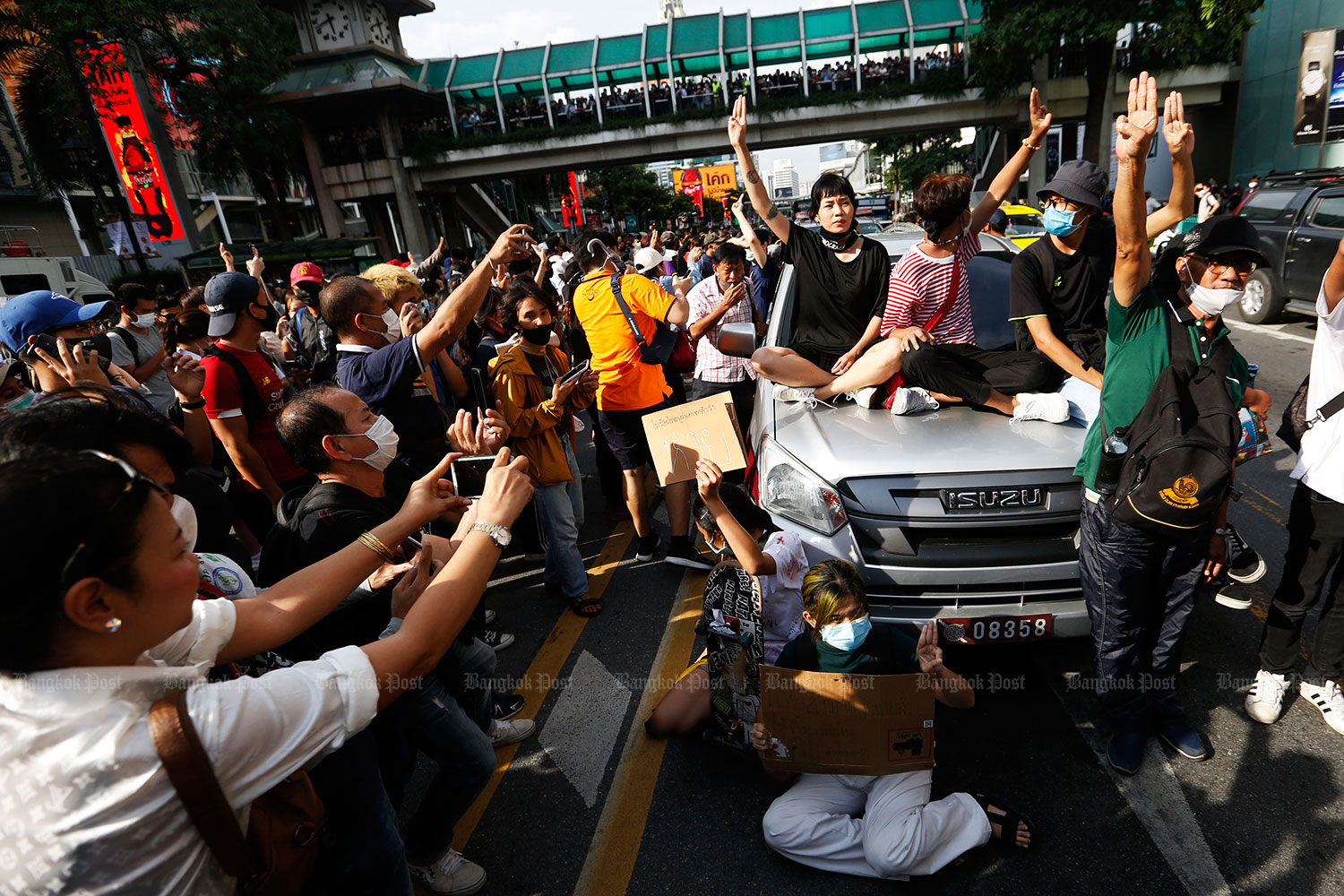 Protesters pose for a photo opportunity at the Ratchaprasong intersection. (Photo by Arnun Chonmahatrakool)