Police used water cannon to disperse anti-government demonstrators in central Bangkok on Friday evening as Prime Minister Prayut Chan-o-cha insisted he will not bow to pressure from student-led protesters and resign.

The crackdown came just two hours after crowds began forming near Pathumwan intersection. The venue was a last-minute change after authorities completely sealed off Ratchaprasong intersection.

The protesters shrugged off the state of emergency brought into effect in Bangkok on Thursday as they sought to pressure Gen Prayut to quit and for the authorities to release detained activists.

Hundreds of riot police formed lines at Chalerm Phao intersection and began advancing toward a large crowd taking shelter from the rain under the skywalk at Pathumwan as some demonstrators tried to push back. 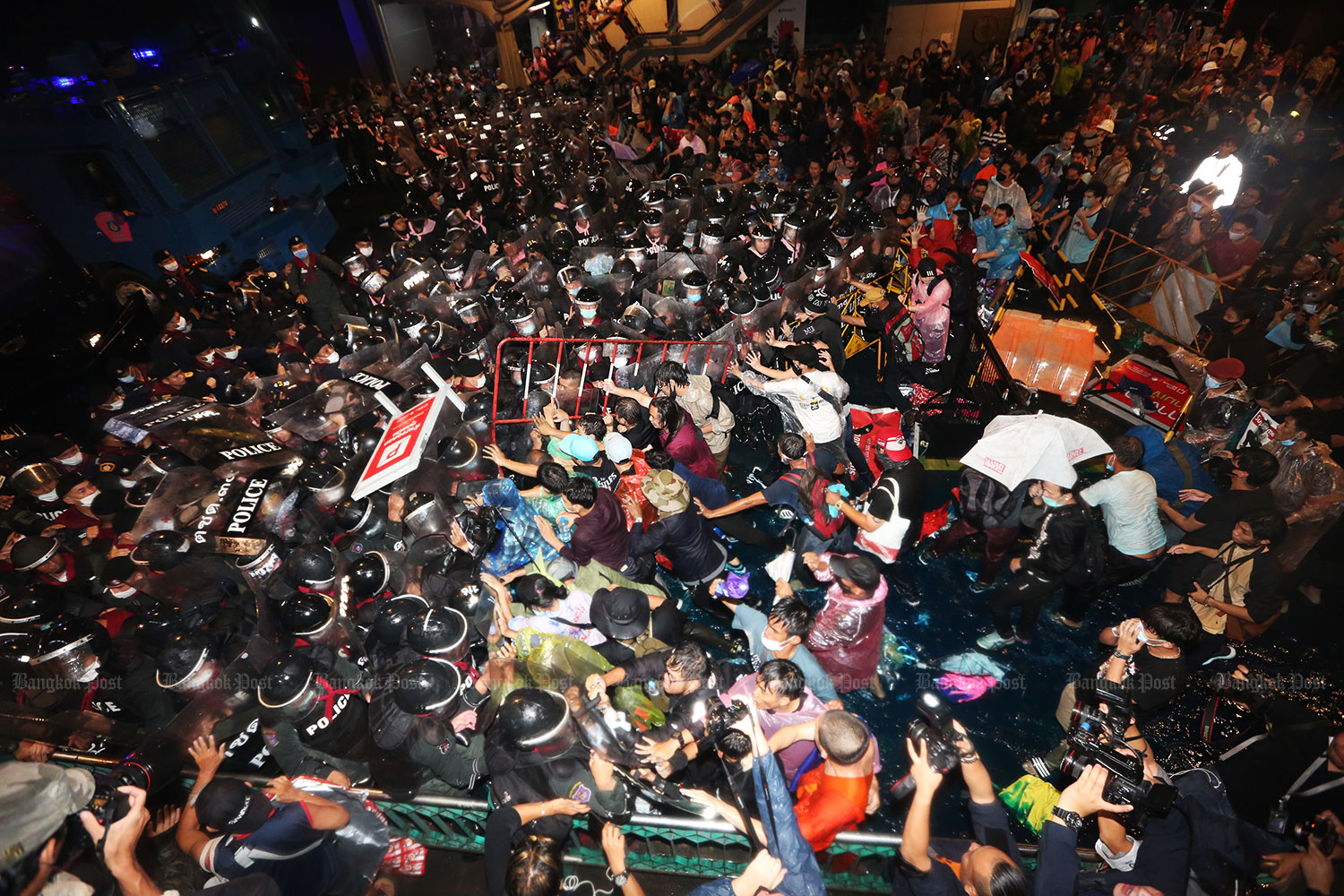 Anti-government protesters scuffle with crowd-control police as they attempt to break up the rally near Pathumwan intersection. (Photo by Pattarapong Chatpattarasill)

Scuffles began a little before 7pm. Protesters began building barriers at Chalerm Phao intersection to prevent officers from moving in. Others chased away police officers and chanted "get out ... stop harassing people".

Police ordered the crowd to disperse immediately before later using water cannon to drive back protesters as they gained ground. Many protesters held opened umbrellas in front of them, a tactic learned from their counterparts in Hong Kong.

Police warned earlier that demonstrators would be arrested if they took part in the rally as the emergency decree bans gatherings of five people or more. 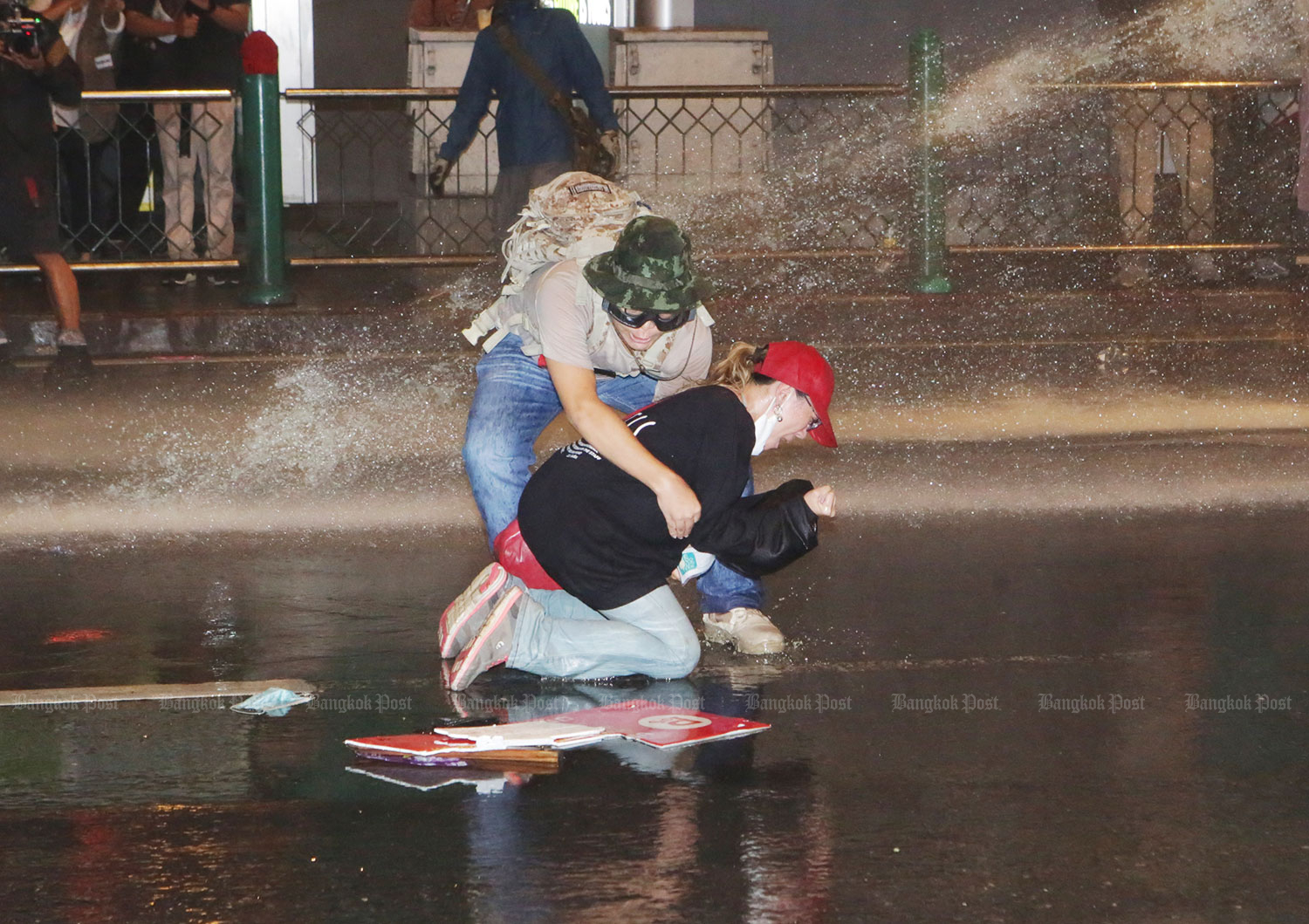 A man rushes to help a fellow protester after she slips when police attempted to break up the demonstration. (Photo by Apichit Jinakul)

The protest was called off at about 8pm. Chulalongkorn University said it opened its main gate for the protesters to take refuge.

Eleven protesters and four police officers were injured during the crackdown and treated at King Chulalongkorn Memorial Hospital.

From the afternoon, the nearby Siam Paragon, Siam Center and Siam Discovery shopping complexes announced they were closing because of the rally. The National Stadium BTS station was also closed.

Operators of the BTS and MRT had curtailed some services and closed some other stations. The Skytrain resumed operation about 9pm. 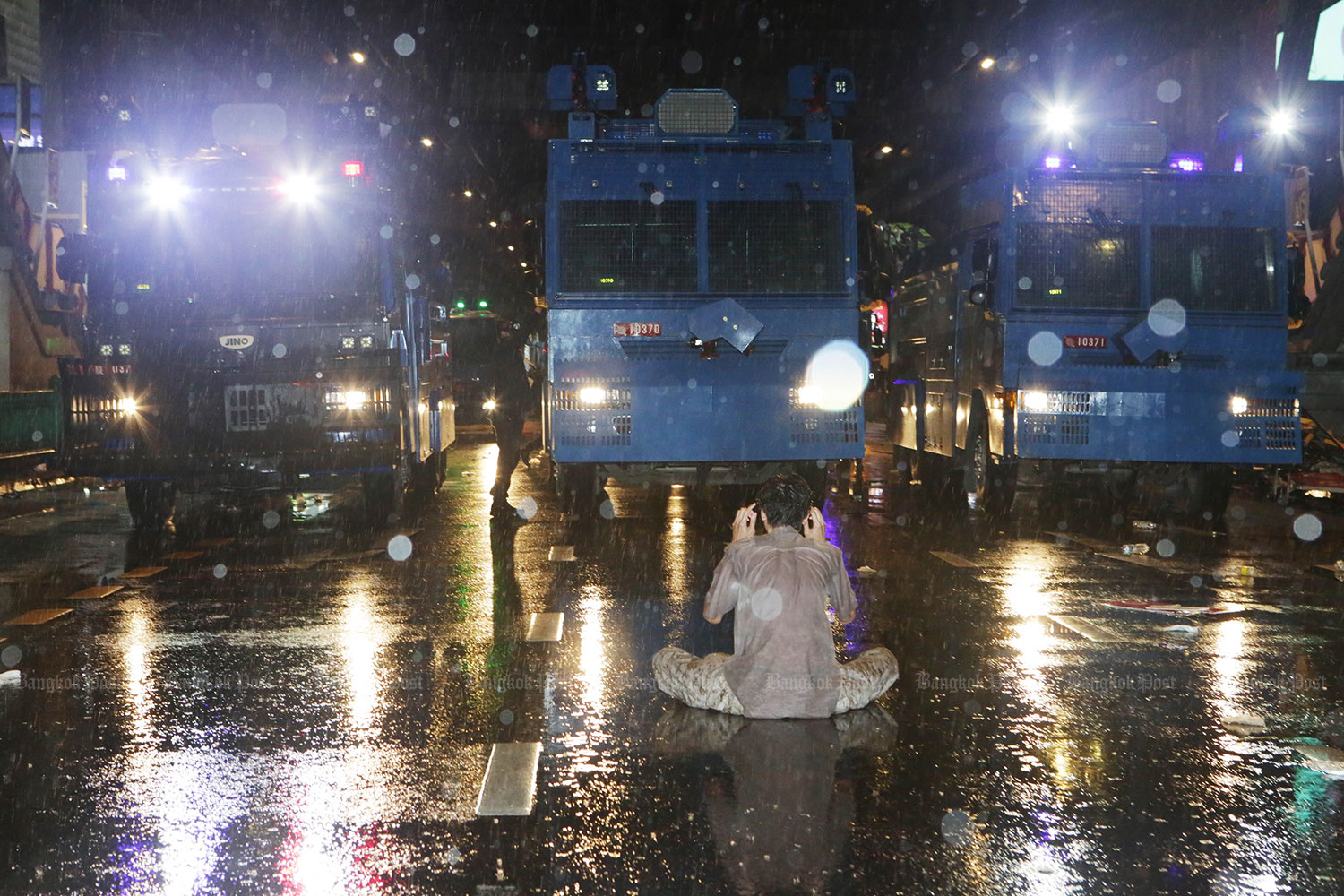 A lone protester sits in front of police water cannons to prevent the vehicles from advancing. (Photo by Apichit Jinakul)

The cabinet on Friday morning formally approved the state of emergency in Bangkok at an urgent meeting called by Gen Prayut.

It took effect for one month starting on Thursday, as proposed by the National Security Council, the cabinet secretariat office announced.

Gen Prayut called the cabinet meeting at 10am to discuss the emergency decree he invoked in Bangkok following street protests near Government House.

He told reporters a curfew banning people from leaving home at night might be imposed if the situation escalates. He insisted the situation did not warrant the declaration of martial law.

Asked if he will bow to the protesters' demand for him to resign, Gen Prayut defiantly said: "No, I won't... What wrong did I commit?" 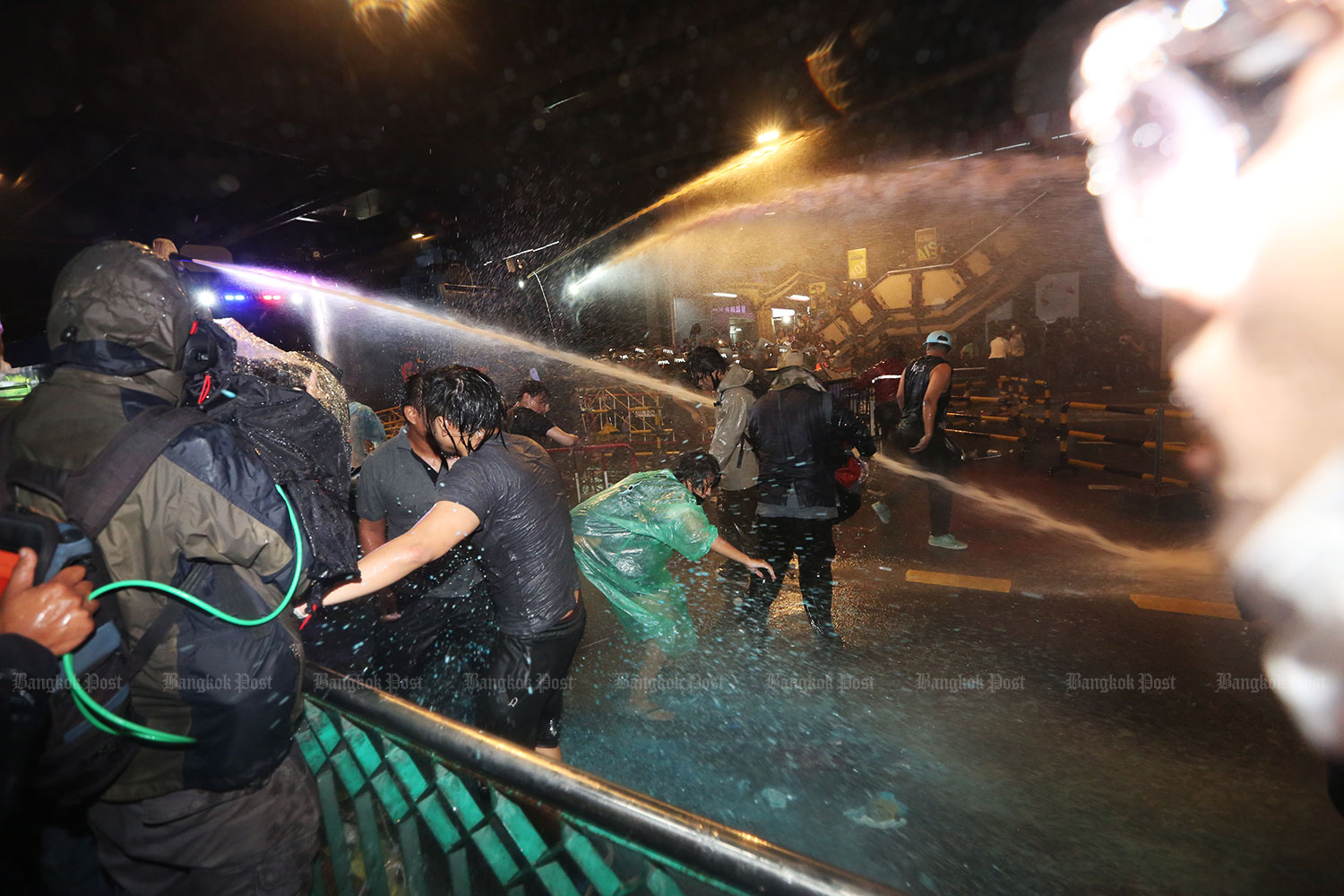 Protesters run for cover as police use water cannon to push them back. (Photo by Pattarapong Chatpattarasill)

When reporters replied that he has possibly been in the post for too long and might stay on for longer, he referred to Buddhist teachings on uncertainty.

"Don't underestimate [the uncertainty of] life. [People] can die at any time from illness or whatever," he said. "Don't challenge death, which has may helpers. Death can come today or it can stay on any day. Everything has the possibility of dying."

"But don't forget that they are a democratic society -- we are democratic. How far can we go? We have to do our best with the cooperation of all the people," he added. 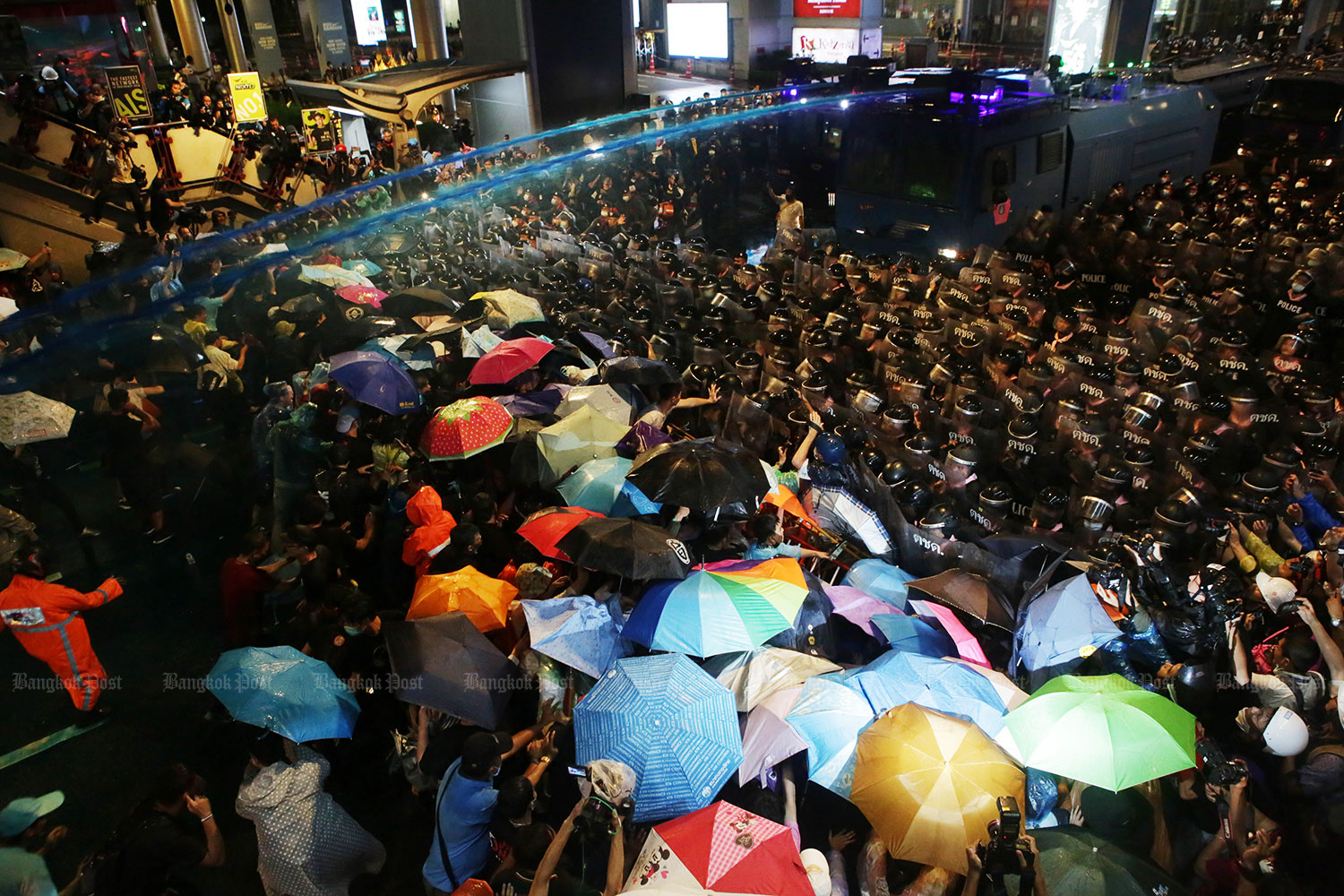 Blue-coloured dye, possibly laced with stinging chemicals, is sprayed onto protesters during the crowd dispersal. The dye is used to make it easier for police to identify protesters for later arrest. (Photo by Apichit Jinakul)

Check-ins and selfies with messages urging people to join could be used as evidence, he said.

Pol Col Siriwat Deepor, deputy police chief, said persuading people to join the rally is a violation, and the offence is subject to a two-year jail term or a fine of 40,000 baht.

A court yesterday allowed the release of 18 protesters on bail while the bail requests for arrested rally leaders were denied.

UN Special Rapporteur on Freedom of Association ,Clement Voule, via Twitter @cvoule wrote: "I'm very worried about the information on crackdown on protesters in #Thailand.The "severe state of emergency" declared & the arrests in Bangkok are stifling freedom of assembly. The government needs to allow protesters to exercise their rights & seek dialogue, not suppress them."