His Majesty has been told that many red-shirt villages that used to support former prime minister Thaksin Shinawatra are now sworn to uphold the monarchy.

"They are from the red-shirt villages to protect the monarchy," Her Majesty the Queen told His Majesty as he was mingling with supporters at Wing 23 of the air force in Udon Thani on Tuesday night.

The Queen repeated the message former red-shirt leader Anon Saennan had told the King as Their Majesties were greeted with loud chants of "Long Live the King" throughout their meeting with well-wishers.

His Majesty told Mr Anon to do good things for the country. "You can do anything that benefits the country and the people, and national security," he said. "Do not do wrong things."

Red-shirt villages were set up by supporters of Thaksin after he was ousted by a coup in 2006. They played a key role in supporting the succession of political parties backed by the fugitive former prime minister in general elections until the latest one last year.

The villages — mainly based in Thaksin strongholds in the northern and northeastern regions — were targeted by the military regime that ruled the country after the coup in 2014, and later by the elected government led by the Palang Pracharath Party after last year's election.

Suporn Atthawong, a former red-shirt and Thaksin-backed MP for Nakhon Ratchasima, was one of the key architects of the campaign to persuade the villages to abandon Thaksin-linked parties and embrace the royalist cause.

Mr Suporn defected from the Pheu Thai Party to Palang Pracharath. He was joined by Mr Anon, a former chief of the red-shirt villages.

"We are the red-shirts for democracy, not the red-shirts to end the monarchy," said Mr Suporn, who now works at the Prime Minister's Office Minister for Palang Pracharath, although he lost his constituency in Nakhon Ratchasima to a candidate from the Bhumjaithai Party. 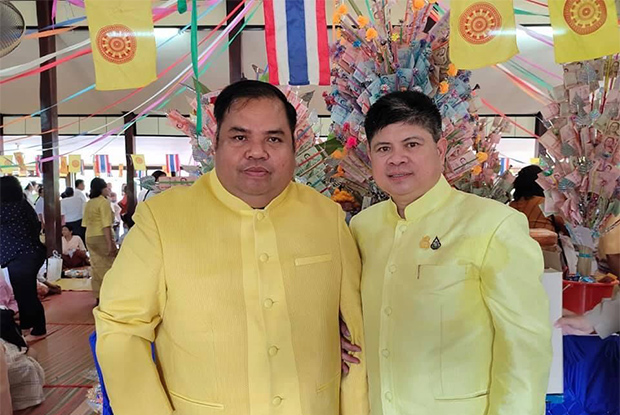 Although he claimed success in changing the stance of the former red-shirt villages, the former UDD member was criticised for betraying their cause for his own survival.

Anti-coup activist Sombat Boonngamanonk took to his Facebook page on July 12, accusing him of ditching his red-shirt principles for those of Palang Pracharath in exchange for the dropping of court cases pending against him. "It is all about your survival but do not think about changing other people," Mr Sombat added.

Mr Suporn was prosecuted for disrupting the Asean summit in Pattaya in April 2009, but the United Front for Democracy against Dictatorship member evaded the charges because police could not find him before the case expired in April last year.

The public unveiling of the new red-shirt villages in Udon Thani on Tuesday appeared to be just the beginning of a campaign that will expand to other provinces.

Mr Anon said he and other royalists will hold activities to promote new-look red-shirt villages in Amnart Charoen on Thursday and Khon Kaen on Friday before moving on to the northern region. The campaign will stress national security and the importance of the highest institution in the country, he declared.